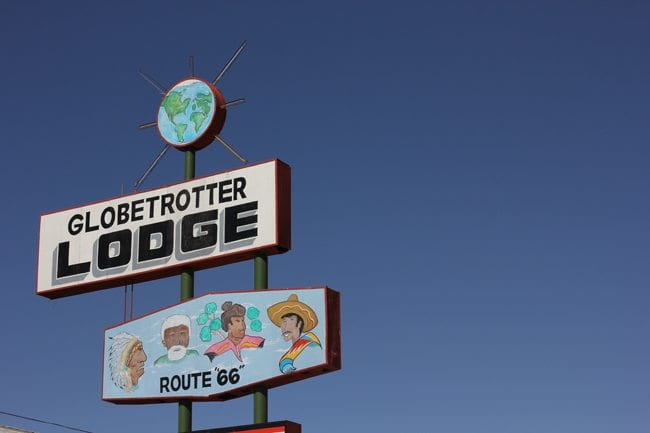 Ok, so we loved the Globetrotter Lodge as soon as we set foot in the warm, cozy room. It was actually freezing that evening…probably about 70 or so, but felt like 50 with the wind, so the actual warm room was quite inviting! But when we got up and explored the grounds and got breakfast? Forget about it. Sold. So please forgive me for the onslaught of photos below: 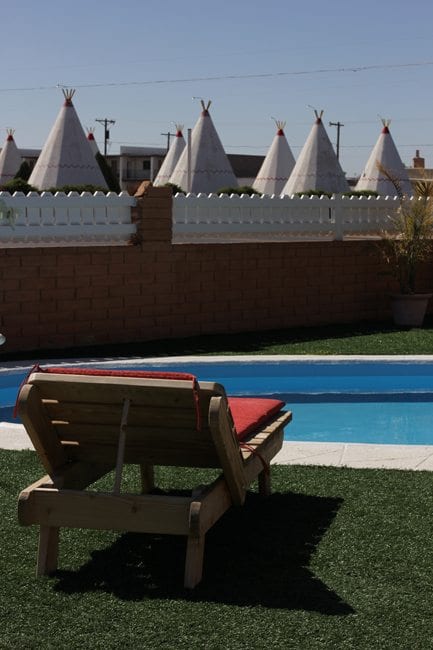 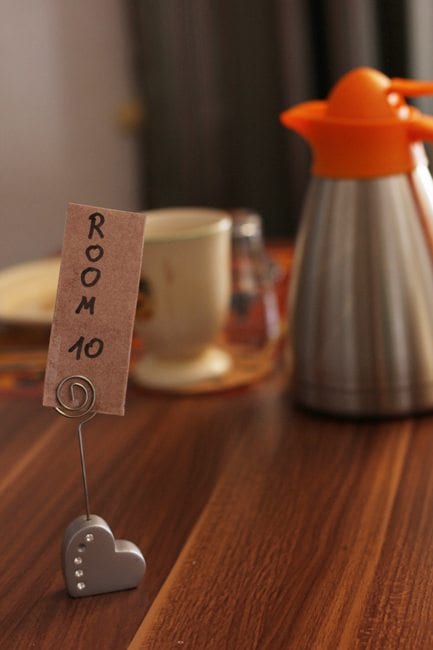 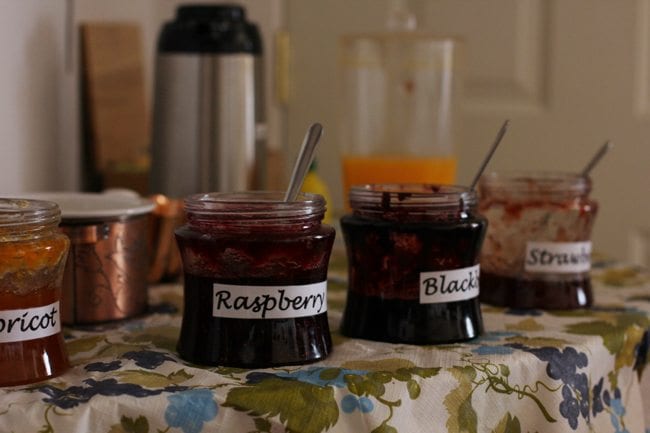 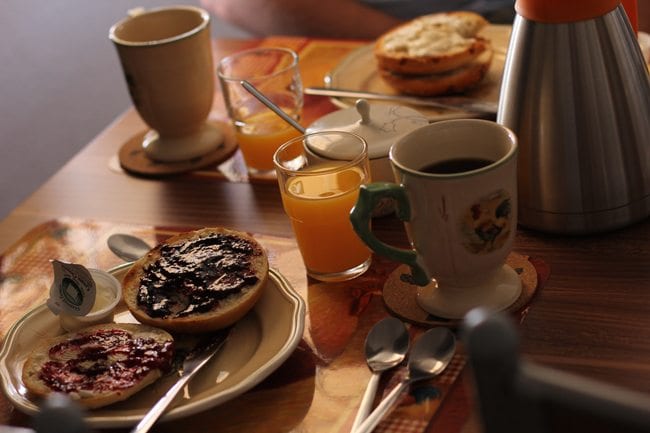 Globetrotter Breakfast – the best on Route 66

As you can see, they set up our breakfast in their lobby/dining area, with our room number and a spread of bakery and jam with a carafe of coffee and orange juice. This ain’t no Super 8. And the bagels were those bakery bagels, crispy on the outside, soft on the inside…we will now proceed to dream about these bagels everyday until we get back to Holbrook. Sigh.

We had quite another drive ahead of us back to Tucumcari for the festival, plus losing an hour, so it was going to be a ‘more driving less exploring’ type scenario. But I made Chris stop for Albuquerque since we have zero ABQ Polaroids in our book! Which brings me to one of the coolest things that has happened to me/us since we started Fading Nostalgia: 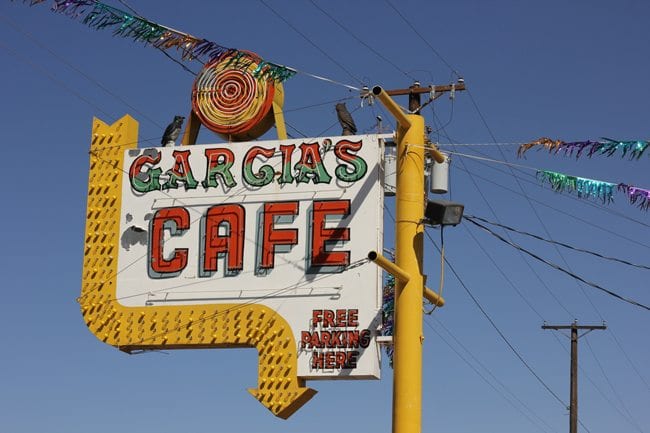 It was a super hot day and despite the super cool, old motel signs being on the outskirts of the city, traffic was nuts. To give you a little background on how we typically take these Polaroids, it’s usually quite the frenzy. We’re usually on the main thoroughfare of a small town filled with a bevvy of activity, driving a few feet, getting in and out of the car with Polaroid cameras dangling from our necks, often standing in the middle of traffic, often getting honks and catcalls. Albuquerque was no exception. Bouncing from motel to cafe to motel to cafe along southern Central Avenue, we tried to capture as much as we could, but one particular sign gave me a world of trouble. Already crabby and sweaty, Chris was ready to give up and get the hell outta dodge, but the sign was SO awesome, I wouldn’t give up. He parked in a Dairy Queen lot as I raced over to the sign, camera in hand. Framed the shot. Mechanical winding sound. No Polaroid. I tried again. No Polaroid. It was empty. I shook my head, ran back to the Dairy Queen (at least three blocks away, no lie!) and told Chris it was empty. He claimed there’s no way as he just filled it. I figured it was user error, so ran back three blocks to try again. No Polaroid. Even more defeated, I ran back to the DQ. At this point Chris was VERY much over it and wanted to leave, but the fact that I failed made it all the more important to succeed! I grabbed another camera. You wouldn’t believe it but this one was empty too. Seriously, no joke. I ran back a third time and grabbed a camera we knew worked while trying to tune out Chris’ disdain! The random guy outside the neighboring building must’ve thought I was crazy. Framed the shot. Success. Success.

I walked back, precious Polaroid photo in tow and collapsed into the front seat of the car exhausted and coated in sweat. Chris peeled out of there and we headed out of Albuquerque. I took advantage of the good city reception and checked my email by phone. There was one from Nick Gerlich. I read on and clicked the link he sent us…a link to his blog post for the day.

My heart swelled up and climbed into my throat as I read his words: his passion for yesterday, his recognition of yesterday’s important role in tomorrow…and where Fading Nostalgia fits in between. As I’ve said many times before, when we started this crazy project, it was more or less our hobby made public. After reading Nick’s post, I got to see our project through someone else’s eyes…I got to see that it really does mean something more than just our hobby…that it stands for something important.

And suddenly all that gallivanting through the busy streets of Albuquerque had real meaning to me. No it isn’t brain surgery, nor is it finding the cure for cancer…but it really does have meaning and substance, meaning for more than just me and Chris. And that moment is one we’ll both treasure for the rest of our days.

We continued west and arrived in Tucumcari just in time to set up shop for the author meet & greet. That evening we all pulled up our chairs and sat around the Blue Swallow grounds with Route 66 Heavy Hitters: Jim & Judy Hinckley, Jim Ross, Shellee Graham, Jerry McClanahan, Bob Saar, and Kevin & Nancy Mueller, the Blue Swallow’s new owners. The motel owners and authors shared stories and Bob played his guitar (and passed it on to Chris once I informed everyone that he was a former thrash metal guitarist!). The remarkable day matched the unforgettable night, to say the least!