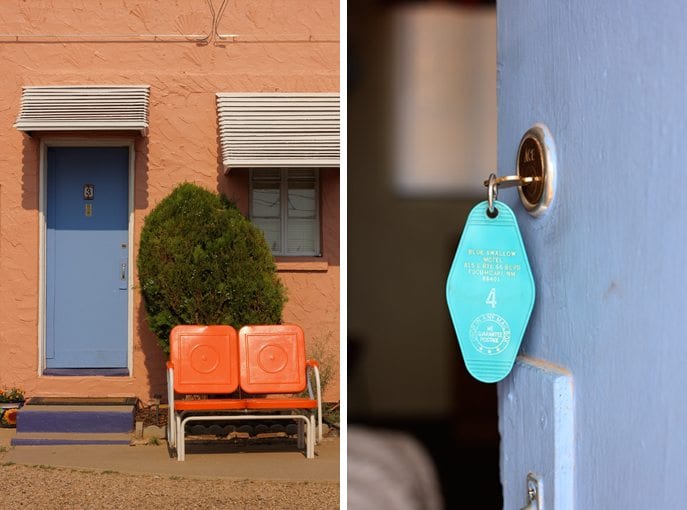 It was SO nice to wake up in Blue Swallow and not have to rush rush rush to pack up our things and head to the next town. Before the Wheels on 66 festival started up at the Tucumcari Convention Center, we stopped at the new and highly recommended Circa Espresso Cafe attached to the renovated Historic Route 66 Motel. We chatted a little with the sweet barista and took a seat to enjoy our coffees before the insanity of the day began. We also explored Tucumcari for a bit, stopped at favorite locations and discovered new ones! 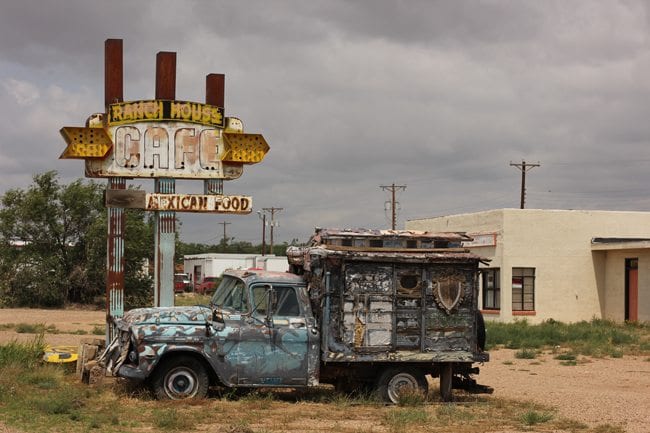 We arrived at the TCC not a moment too soon to set up shop. Bikers and car tour groups were already chatting with the other authors there. We arranged books, new Polaroids taken on the trip and an abundance of colorful merch…quite the spectacle! 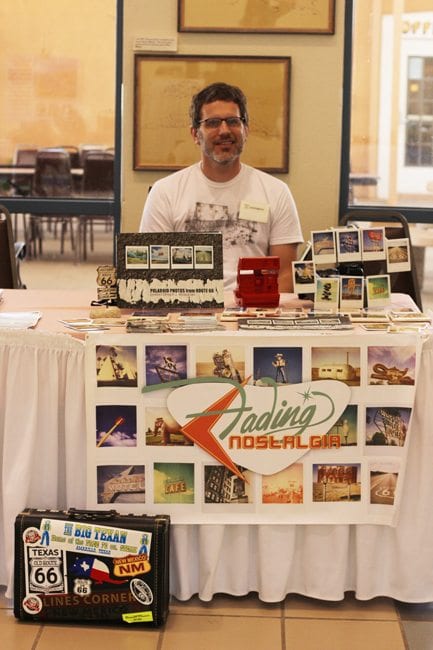 A couple hours into the book-signing, the Madison Museum of Contemporary Art called Chris. Long story short, they needed our tax ID (for the art fair in which Chris is presenting this summer) by 5pm, which in Central time was about an hour away. We had the ID all ready to go, but still needed to fill out the paperwork. With no printer or fax machine available—and this is a major plug for the Samsung Galaxy Note comin’ atcha—Chris emailed me the tax ID form, went back to our motel to get my notebook with the tax ID, I filled out the form on my phone by hand with the S-Pen, I emailed it off to MMoCA, they received it after a second try at 4:59pm CST……happy ending! But the hour-long process was quite the scramble and on the way back to the TCC with tax ID in hand—super stressed out and anxious about sending it back on time—a tattoo shop on Tucumcari Blvd (Route 66) caught my eye and I just got this overwhelming urge to get a tattoo. My mind raced, what in the world would I get? What would be most significant right now? Chris’ voice swirled in my head: “It’s about the journey not the destination.” I’m always frantic and buzzing. He’s always telling me to slow down and enjoy the ride. Yes, yes this had to be it. And I’d put the little mantra between quotes that looked like 66’s. It was perfect. And I was in Tucumcari of all places! What better place than the wild west of the American desert to get inked completely out of the blue??

After we settled the tax ID fiasco, I couldn’t let it go. I expressed my silly idea aloud to Chris and some others nearby, half laughing it off, half dead serious. We carried on with the book signing and coming up on the end, one of the guys who overheard me earlier stopped by and told me: “You know, someone is doing tattoos here at the Convention Center….$50!”

Sure enough, down at the other end of the center, Mateo from Bare Knuckle tattoo shop out of Albuquerque (another good sign, ha!) was set up and giving people tattoos. With all the bikers crawling the place, I’m pretty proof positive, however, that the only two people who actually got tattoos were a 16 year old kid and my 32 year old self. How’s that for irony?

And after a few hours of waiting through the tattoo artists’ own technological difficulties (it was going around that day) and only 20 minutes of an only minor sensation of pain, it was done. And it was permanent. Tattoos are no joke and some people may even consider them mistakes! But everything that happens to you in life—whether it was your decision or not—is permanent. It’s a part of you and makes you the person you are. This important message is now part of me, part of the experience we had out here on the trip…another story amongst millions of stories that make up the fabric of the road. 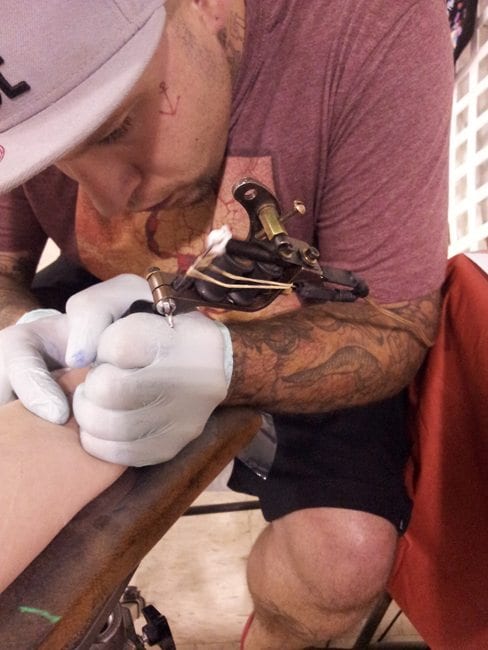 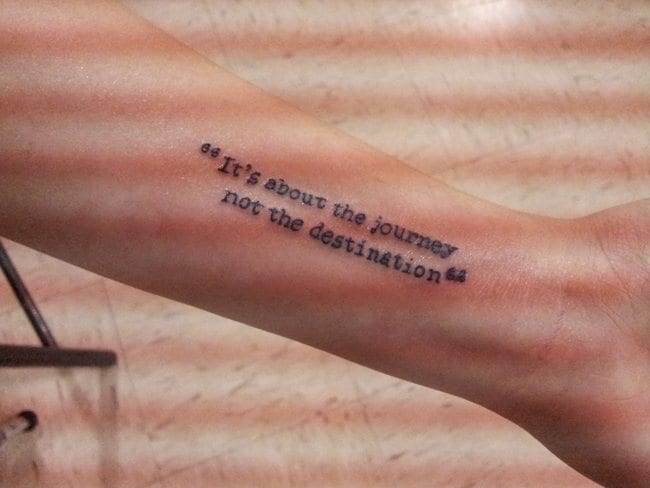 It’s About the Journey, Not the Destination

What better way to celebrate a new tattoo than climbing around an abandoned motel? In all seriousness, this was a very, very cool place. Earlier, Jim and Jerry tipped us off to the place right next door to the Blue Swallow and it was right up our alley. The Economy Inn—so unassuming from the outside—just stood there frozen in time. 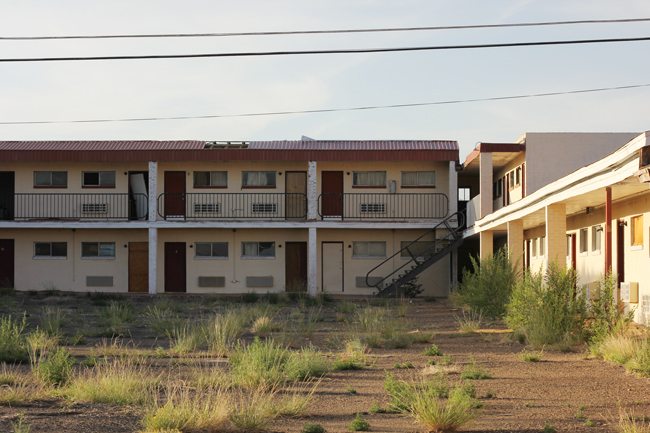 Well, frozen in a time where maybe a bomb went off inside…as clearly it had deteriorated drastically, but perfectly good tables, chairs, telephones, Bibles and art rested inside (and outside) of the rooms. 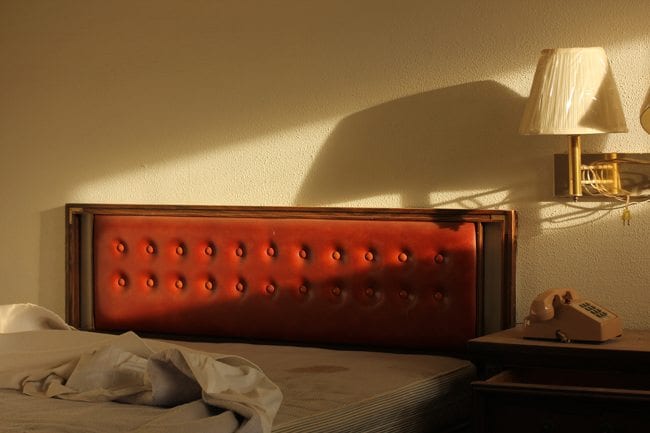 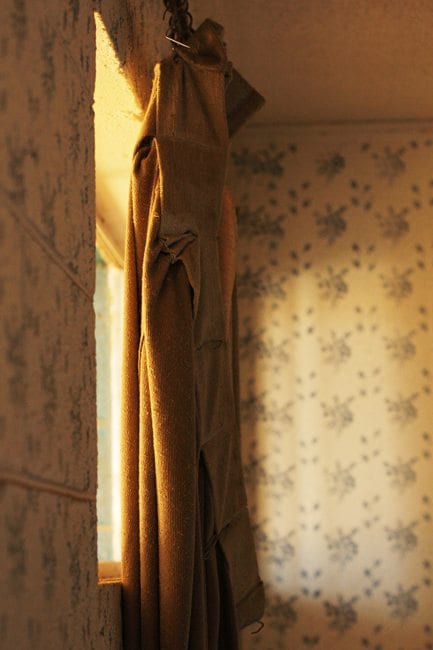 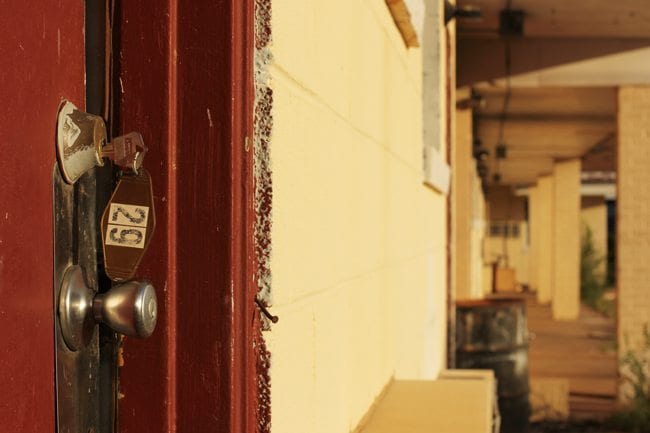 While it’s unfortunate that this sort of collapse isn’t a rarity in Tucumcari, obviously the bright pink and blue beacon next door is a testament to Tucumcari’s motel revival. The owners of the Blue Swallow, the Motel Safari across the street and the Historical Route 66 Motel a few blocks down are just a small handful of examples of new life in the desert town on 66. 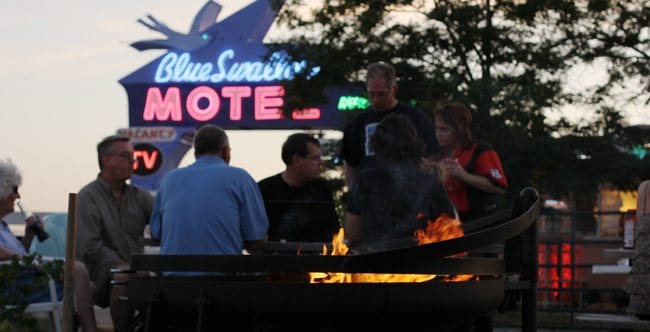 BBQ at the Blue Swallow Motel

When we returned, Kevin and Nancy and company had the fire going and a delicious array of food and drinks laid out on the table. We spent the rest of the evening eating, laughing, drinking and telling stories with the rest of the Blue Swallow crew. As the sun dipped below the horizon, it was quite the site to be seen: a bunch of photographers trying to get the perfect shot of the iconic sign against the equally as iconic Tucumcari sunset. Love it. Another amazing day capped off with another amazing evening. 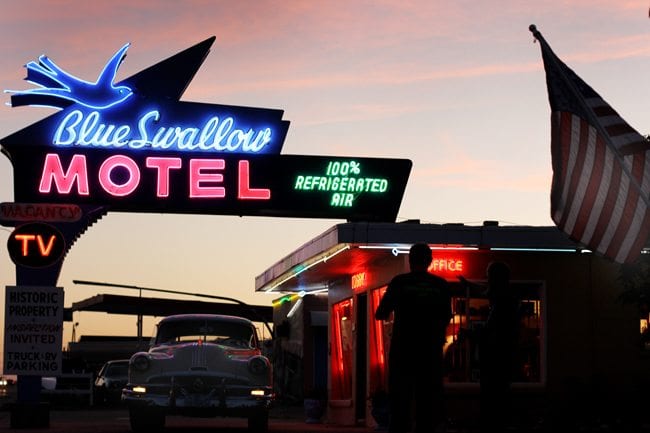 Sunset at the Blue Swallow Motel