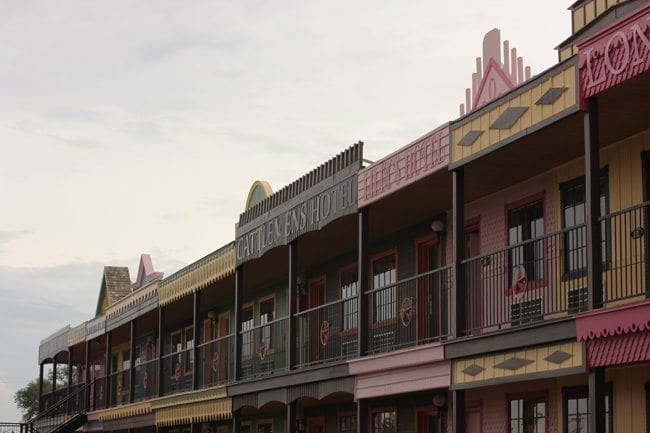 Woke up to another cloudy day (more rough weather than not on this trip so far!) Took a photo of the Texas-shaped pool…of course! 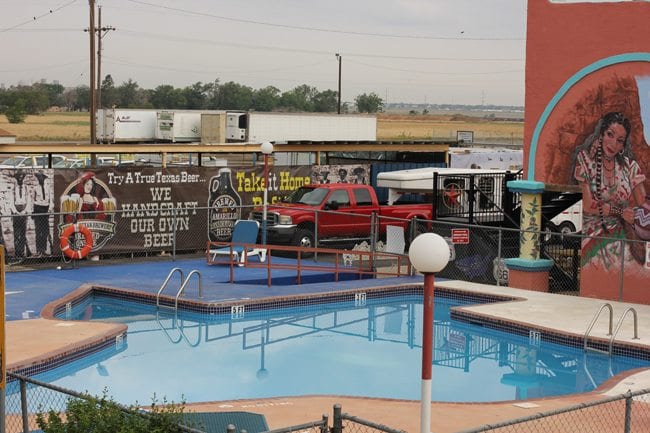 Our first stop…coffee and pie at Midpoint Cafe in Adrian, TX. Because I don’t see anything wrong with a lot of pie for breakfast. Especially peanut butter pie. Or pie that tastes exactly like a baked chocolate chip cookie. We had the distinct pleasure of chatting with the new Midpoint owner Dennis Purschwitz, a Tennessee-transplant who acquired the cafe in late 2011. He took a look at our book and told us he absolutely loved the idea behind it. He glanced over Chris’ story about the cafe and told us that he can’t actually use the phrase “ugly crust pies” as the woman who made them is no longer associated with the cafe and the name is more or less trademarked. Whoops! Haha! We were also lucky enough to hear a bunch of Dennis’ future plans for the cafe, and let us tell you: if he carries them all out, Midpoint Cafe will be an even bigger attraction than it already is, which says quite a bit! So we wish him a ton of luck!

And then began another looong drive, this time through the Painted Desert and we always seem to be in a “rush” when we’re in the Painted Desert, aka: not a lot of time to leisurely stroll and photograph Route 66. This time we had to make it to Holbrook before Joe & Aggie’s closed. I myself have never eaten there, and Chris always gushes about how fantastic it is. 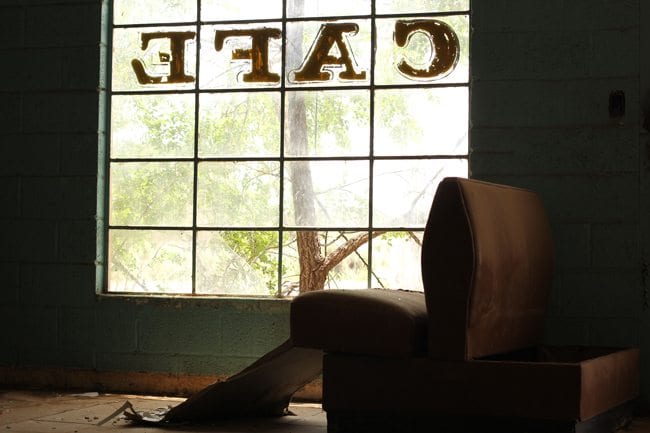 Despite our rush, we still stopped in Glenrio—the other Fading Nostalgia Ghost Town favorite. 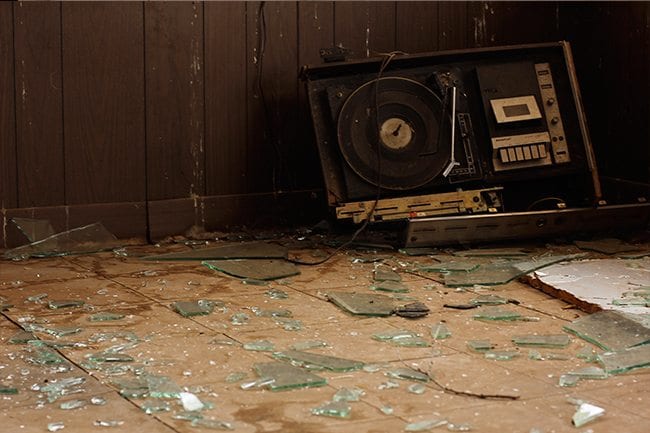 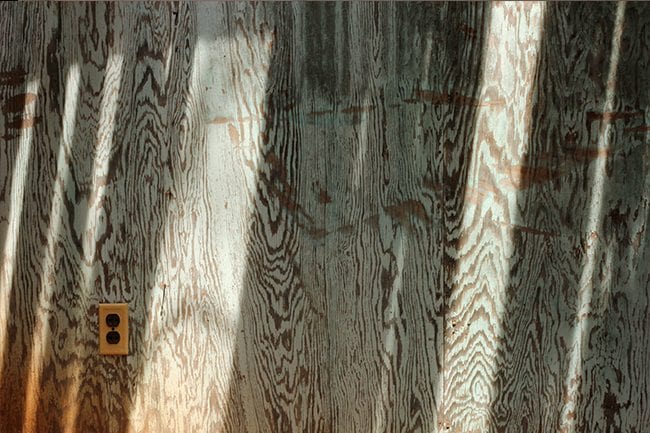 And of course we nearly ran over yet another turtle: the apparent official mascot of the 2012 Book Tour. 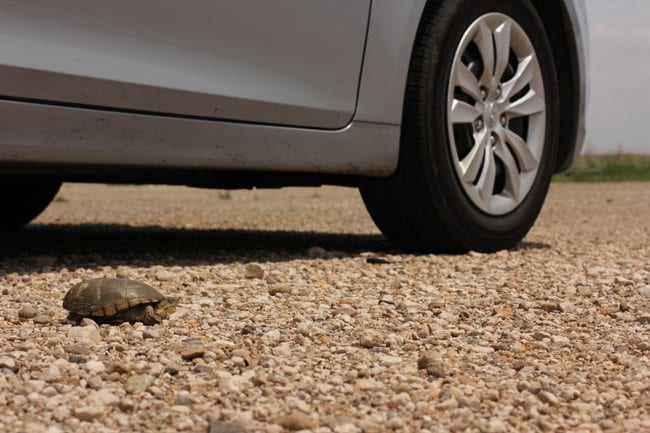 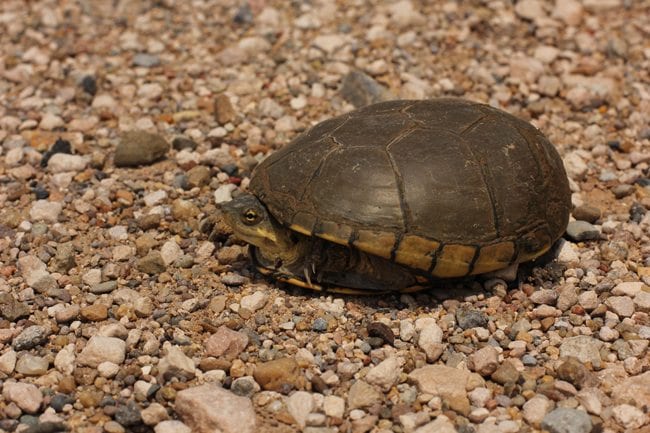 On the drive, in a small section of the desert where 4G magically exists, I emailed with a new friend of Fading Nostalgia, Nick Gerlich to ask about the infamous Painted Desert Trading Post. It’s like Chris’ White Whale: a night photographer’s dream comp: pure white building, deep blue sky, barren landscape, blanket of stars. The main reason we were traveling six hours west of Tucumcari. Nick got back to me right away that he’d get in touch. We stopped at a McDonald’s in the parking lot of one of many Casinos off I-40 for some much needed wifi and while I typed out a blog from the previous day, we got a call from Nick who gave Chris all the info we needed about the PDTP: the interstate exit, the padlocked/barbwire fence, the 2-3 mile walk to the abandoned building…we were set and we were stoked!

As we carried on and crossed the New Mexico-Arizona border, I fretted about the time and our impending much-too-late arrival into Holbrook. I checked my phone for potential service and noticed that the time was way off…by two hours! Ohhhhh time zones, beautiful, wonderful time zones. So while we weren’t suddenly ahead of schedule, at least we were on time for some delicious food at Joe & Aggie’s! What a blast that place was! We spoke with one of its gregarious caretakers who told us all about how he moved from the hustle and bustle of Phoenix and never looked back. Now his days are filled with Travelers of the World passing through Holbrook and packages of Cars memorabilia straight from John Lasseter himself. It was truly an inspiration to see how happy he was there in that little restaurant. Chris is always trying to convince me to move to a little town on 66 and this city gal isn’t quite so sure about that. But after our experience at Joe & Aggie’s, it’s hard not to be moved by a former city boy ex-patriot’s story. 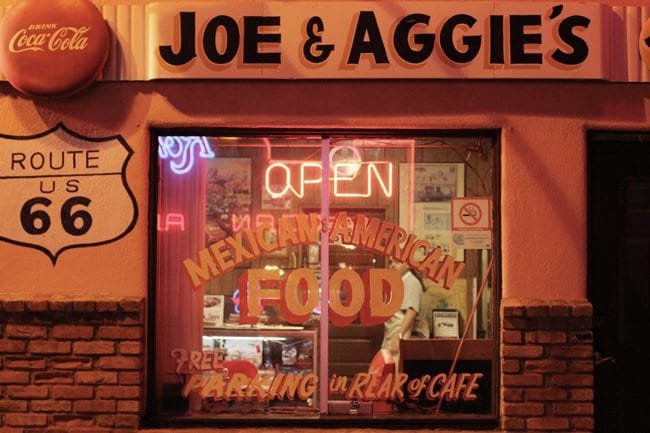 Stuffed full of enchiladas and sopapillas, we quickly unpacked our belongings at the newly renovated Globetrotter Lodge across from the Wigwam Motel. More about that in Day 6! With our night photography gear in tow, we embarked on one of the most intense journeys to date! Well, simultaneously intense and yet serene all at the same time.

Approaching Exit 320, I—we both were pretty anxious. We’ve both been “urb-exing,” as the kids say, plenty of times before, but for some reason, this particular location felt very questionmark: The long walk in…how long would it be? The “cow boss”…did Nick tell him about us or would he be pissed we trespassed? The animals…ugh, the ANIMALS…cows, antelope, snakes, scorps?? After a bumpy dirt road ride to the gate, the waning full moon just poked up over the eastern horizon. A moonrise. I’ve never seen one, so it was enough to exacerbate my already heightened nervous system. We unpacked and hopped the gate. Point of no return.

The walk was indeed lengthy, but we were so excited, nervous and busy dodging cow pies, we barely noticed. Soon enough the distinctive, giant, black mound of rock loomed in the distance and we knew we were close. With the moon hanging low in the sky, we could even see the reflective white box of a building. When we arrived, we both breathed a sigh of relief: half the battle was over! We busted out all the gear and got started: Chris comping and framing the shots, Katie climbing around the barbed wire-protected concrete and treacherous innards of the long-abandoned trading post (women always gotta do the dirty work, don’t they?!) After several hours and several angles, we called it a wrap and packed up for the long journey back to the car. And long it was. Chris commented, “oh this will feel way shorter on the way back.” Right. At 3am we were back in our Globetrotter king-sized bed safe and sound. We did it. 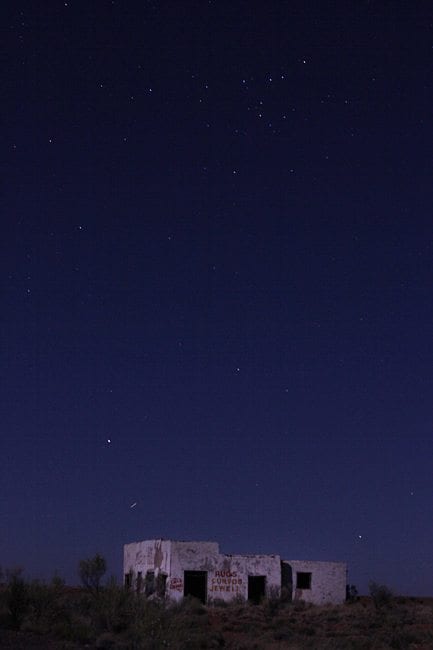