Once again, if you’re just joining us, I encourage you to check out Parts One and Two. Now that you know a little more about night photography and light-painting, we’d love to take you on a little journey by recounting one of our absolute favorite night photography excursions: the Route 66 Painted Desert Trading Post. 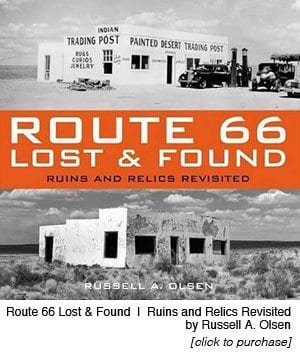 For those of you who followed along on our recent Route 66 road trip in June, this journey will sound familiar, but bears repeating! As a traveler of Route 66 for several years, Chris has found countless images of this lost place…in daylight of course. When we planned our trip to the Wheels on 66 festival in Tucumcari, we noticed that the trading post was just a short jaunt, 400 miles west near Holbrook, Arizona. Even though we weren’t headed that way, we decided it was imperative to make a special trip.

First of all some quick history on the Painted Desert Trading Post: Opened in the early ’40s by Dotch Windsor and his first wife, Alberta, Dotch (along with his second wife, Joy Nevin) ran the post until the mid-to-late ’50s when he decided to call it quits and leave the building to the arid, dusty elements. Even in those days when Route 66 was packed solid full of travelers and vacationers, the trading post was a remote destination with no electrical power (gravity did the work for the gas pumps and wind did the work for the appliances). Though it has been pummeled with sand for over half a century, you can still make out much of the painted graphics on the sides of the white building. Before the interstate pulled travelers miles away from Route 66, you could drive the gritty old alignment right up to the trading post. Now, however, the easiest way in is blocked by a large and solid metal gate emblazoned with a “No Trespassing” sign, as the property is now owned by a cattle rancher. There is an open way in about ten miles east of the post, but the road is washed out and clearly not fit for anything without four-wheel drive…especially a rental! Plus it sounded way more possible to visit the post if we, perhaps, got some sort of permission. We come in peace, afterall. 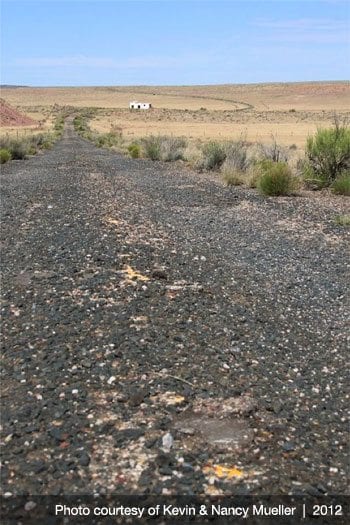 We were determined to find more information about the elusive curiosity. It was a light-painter’s dream comp: simple, pure white building; clear-as-crystal, deep blue sky; a barren desert landscape below a gorgeous blanket of stars. Even after reading website forum after forum, we were still unsure as to how we were going to reach this White Whale. A week before our trip, a conversation thread regarding the PDTP just happened to spark on the Route 66 World facebook page. Chris intently followed along with the various comments about protecting the trading post from vandals, as well as how to locate the owner so people could see the relic. Finally, days before our trip, Chris found a glimmer of hope in one Nick Gerlich from Texas who had just visited the trading post by mountain bike. He described how he had run into the cow boss on his way to the post and got the man’s kind blessing to go ahead and explore! After some additional conversations, we gleaned the impression that the cow boss was happy about the fervor surrounding the trading post and welcomed anyone to contact him to tour the place. In fact, just a few weeks ago, Kevin and Nancy Mueller—beloved caretakers of the famous Blue Swallow Motel—braved the blistering sun and heat to venture out to the trading post themselves!

The only thing was, we weren’t interested in seeing it in the daylight. We’d be going late, late into the night.

So once we officially hit the road with a better idea of our schedule, along one of the lengthier drives on the New Mexico highway heading toward Holbrook, Arizona, in a small section of the desert where mobile internet 4G magically exists, I emailed with Nick to ask about this magical place so many fans of Route 66 were just dying to see. Chris and I stopped at a McDonald’s in the parking lot of one of many Casinos off I-40 for some much-needed wifi and while I typed out a blog from the previous day, we got a call from Nick! He gave Chris all the info we needed about the PDTP: the interstate exit, the padlocked fence, the cow boss, the condition of the road in, the animals and critters we might encounter, the 3 mile walk to the abandoned building. All thanks to Nick, I know my anxiety about going to the post completely blind (we were going at night afterall) was calmed. And Chris was just more excited than ever. We were set and we were stoked!

When we arrived in Holbrook, we stopped at Joe & Aggie’s for a soulful dinner to fuel our adventurous spirit. Stuffed full of enchiladas and sopapillas, we quickly unpacked our belongings at the newly renovated Globetrotter Lodge across from the Wigwam Motel, repacking our light-painting gear for the active night ahead. I stowed beef jerky and extra water in case “something bad happened,” along with various sprays of the bug and sun variety to act as our only line of defense against critters large and small (eep). With our heavy gear in tow, around 10:00pm, we embarked on one of our most intense journeys to date! Well, simultaneously intense and yet serene all at the same time.

Approaching Exit 320, we were both pretty anxious. Even with Nick’s advice, I still wondered about all the questionmarks: The long walk in…how long would it be? The cow boss…did Nick tell him about us or would he be pissed we trespassed? The animals…ugh, the ANIMALS…cows, antelope, snakes, scorps?? After a bumpy and twisty dirt-road ride to the gate, the waning moon had just poked into the eastern horizon. Moonrise over the desert. Simply beautiful.

We unpacked and hopped the gate with all of our gear: the point of no return.

The walk was indeed lengthy, but we were so excited, nervous and busy dodging cow pies, we barely noticed. The temperature was cool, but walking warmed us up quick. Even though you could see the glow of head and tail lights near the horizon, a couple miles to the south, we still felt absolutely alone out there. It was spooky, but definitely tranquil under those brilliant stars with the moonlight growing brighter with every moment. Soon enough the distinctive, crater-like mound of rock we had seen in photos loomed like a giant in the distance and we knew we were close. With the moon hung low in the sky, we could even see the reflective white rectangular building, so tiny, still a mile away.

When we arrived, we both breathed a sigh of relief. We busted out all the gear and got started: Chris comped and framed shots, I climbed around the barbed wire-protected concrete and dark, treacherous innards of the long-abandoned trading post to explore what I was up against. As Chris controlled the exposures, I popped the Vivitar flash at the walls and ceilings inside. First a blue gel, then a red one and finally a yellow: the yellow spoke volumes. To us it was perfection. 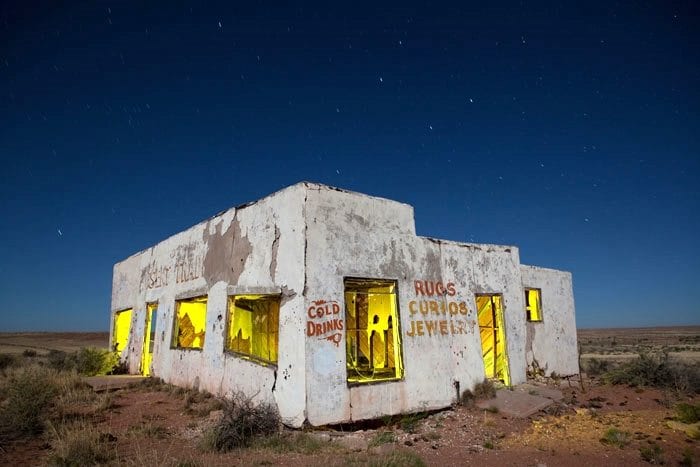 I continued to leap and hurdle around inside the building as Chris changed angles and compositions. As mentioned in Part Two yesterday, when using a Vivitar strobe-style flash, it’s not only tough to see where to step (between flashes, the inside is nearly pitch-black with just a dash of moonlight that seeps in through the east windows), but the flash occasionally blinded me when I accidentally kept my eyes open (what is this amateur hour?!). I weaved through the interior studs and tucked into alcoves. The structure wasn’t huge by any means, but there were a lot of windows that needed to be illuminated, so after every take I’d jog back through the desert brush to Chris, glance at his camera screen and say, “nope go-again,” jog back to the building and continue to crouch inside the corners of the exterior walls and dart in through the back with bursts of color. I must’ve done this at least three dozen times.

We had to get this perfect. 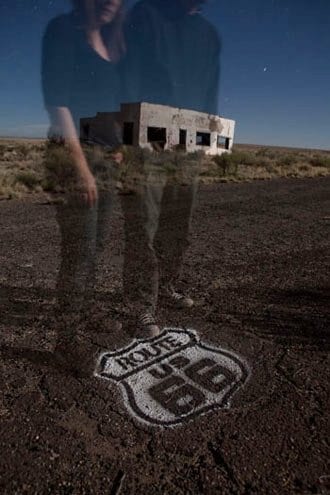 We’d undoubtedly never again step foot inside the Painted Desert Trading Post during such ideal conditions, so we spent several hours shooting several angles with several colors. Using the moon as our light-painter, we even shot a few ghosting ourselves into the photo (another popular night photographer technique). Eventually with the impending 3 mile walk ahead of us we called it a wrap and packed up for the long journey back to the car. And long it was. Midway through, the wind shifted directions and the temperature felt like it dropped thirty degrees! Even with light sweatshirts and a swift pace, we were freezing!! We passed the time pointing out all the familiar mile markers: the old tin can, the spot where you can still see the Route 66 divider line paint on the crumbling road, the cowpies. We even discovered that a noise we thought was the low, faint rumble of semi-trucks on I-40 was actually snoring cows under a bridge we crossed. And after what felt like an eternity, looming in the moonlight, we could spot the fence and our car just as we left it on the other side of the gate. The exhilaration and accomplishment you feel during a light-painting adventure is one thing, but the sense of calm and relief when you make it back to your car safely is the icing on the cake. And just after 3:00am we were back in our Globetrotter king-sized bed safe and sound.

We hope the trading post is a permanent fixture on the Arizona desert landscape. Many have suggested renovating and re-opening the space, while others urge to let it be. Because it is so far off the beaten path, so to speak, perhaps letting it remain in its relic state will serve as a simple, but strong reminder of our past. We will never forget the night we spent there and what it must’ve been like to travel that same old road we walked, when the trading post was the only spot to stop for miles and miles.

Many thanks to all of you who followed along on our three-part series about light-painting and night photography. On the one hand, the last thing magicians do is reveal how they perform their tricks, but—at least for me—learning about the time it takes, the skill level involved and the terrain one must traverse to get a truly unique image almost makes it more powerful and engaging. And yes, even a little more magical.

Looking to purchase this fine photograph? Hop on over to our Etsy shop!