“Owanka the City of Promise • Near where the Box Elder Flows

We hope someday will be famous • Who can tell? Nobody knows.”

It’s an oddly warm late morning, and after filling up on maple donuts and 5¢ coffee at the famous/infamous Wall Drug, Chris and I decide to head out to the Badlands, but not before a quick stop in Owanka, a cozy little spot nestled in the hills. As we exit I-90 and head south, it’s like we’re sliding back in time. Especially when we hit this very old school traffic jam.

To most, Owanka is a forgotten blip on the map, but that’s probably alright by the last remaining residents–David and his wife. More about our run-in with David later, but first, pull up a log, and I’ll share with you the tragic tale of Owanka, South Dakota.

If this unincorporated township’s history isn’t straight out of a dusty, crusty, but beautiful Netflix series, I don’t know what is. In all seriousness, though, the events that took place in Owanka are not unlike many of the settlements across the west. In the name of either staking their claim or finding a better life, most of these pioneers stood raw against the most extreme events and elements imaginable.

But through the devastating decades, which I’m about to describe, many within Owanka’s community didn’t give up! Rich in hope and determination, these people did their best to keep up spirits against all odds stacked against them. I’ve paraphrased an account of the area’s history, researched and written by Connie J. Mickelson in “What Happened to Owanka?” 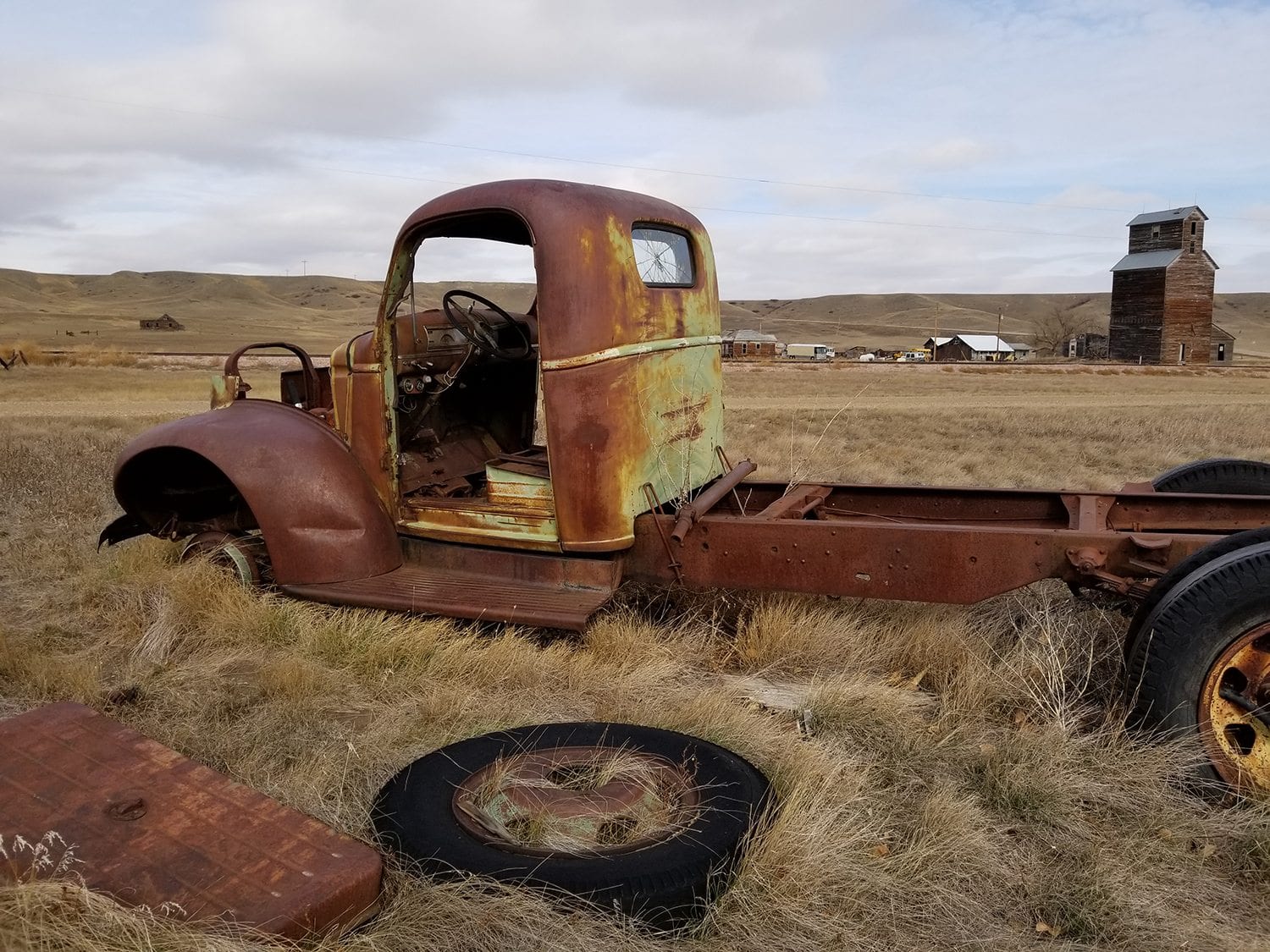 While the Sioux had settled there long ago, white homesteaders arrived in the area in the 1880s and set up shop. Due to nearby mining, by 1906, Box Elder Creek—the town’s sole water source, the same creek that had sustained the Sioux for years and years and provided an abundance of resources and wildlife—grew far too alkaline and totally undrinkable.

But the next year Owanka got dubbed an official railroad town by Chicago Northwestern RR, and while this alleviated the water issues (by hauling water in), the town never actually fixed the source (yep that’s foreshadowing). The town did flourish in the wake of the railroad, but in 1920, their bank was robbed, which shook the many of the townsfolk, who took their business elsewhere. By 1924, the bank ran out of money, which of course obliterated the savings of the remaining customers.

In 1928, the community was marred by its first controversy: the school’s superintendent married a teen girl, which caused locals and outlier townsfolk in the area to bypass Owanka and take their children to other schools. In the 1930s, the creek and the dam they chose to construct—aka: their misguided water fix—dried up. Sadly, they had turned down financial aid offered back in 1931, and that had dried up too. To make matters worse, in 1935, the railroad stopped hauling in water, which left people to fend for themselves when it came to a clean source. Water wasn’t the only thing that dried up either. Not a drop of alcohol was to be served within the boarders of the township. So anyone passing through to whet their proverbial whistle would keep on walkin’. 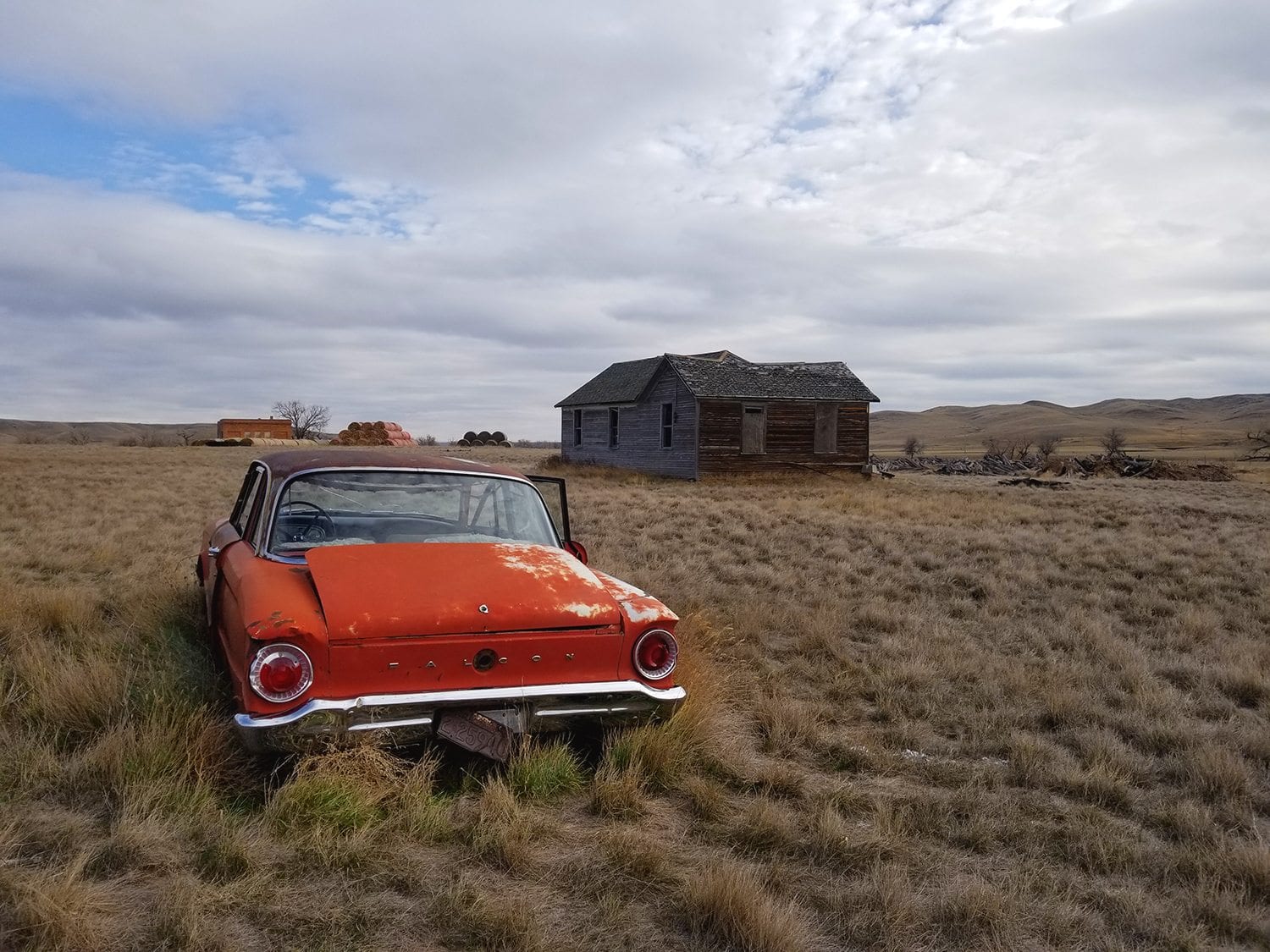 But the true death knell for the town though was the improvement of the “big highway” five miles north of the town. Not to be outdone, four years later, when a shocking murder divided the community. And finally, one by one, many of the key landmark buildings—the depot, the hall, the churches—were moved to the surrounding larger towns like Wall. Even the cattle were sold off. The last school shuttered in 1964.

The beauty though is that—through all of this—families worked hard and raised their children and their children’s children, many of whom remember their days in Owanka quite warmly. Here are some comments from South Dakota Magazine’s article, “Owanka Ghost Town.”

“Did a lot of growing up in Owanka! My Grandfather was section foreman for the railroad. The two story house in the pictures with the truck in front of it, was the railroad’s house for the section foreman. Slept many nights in that upstairs!”

“I was born in Pierre but my parents and I and two sisters lived in Owanka, my Dad was section foreman for the railroad…Seeing the section house again where we lived gave me chills.”

“My grandmother was born in the early 20th century in Owanka. Her maiden name was Louckes, changed from Lukes, and her father was a farmer. Family legend has it that her mother, my great-grandmother, had Lakota Souix [sic] blood but that was never confirmed and in those days would be hushed up….My grandma would tell me of her life on the farm and how she’d go out into the fields to pick wildflowers with her sisters and of the cold winters.”

“My Family (The Tom and Erma Brassfield Clan) came from this area and I was only 10 when we moved away but I remember going for water in Owanka many times. Sad to see towns die like this but it happens.”

Speeding back to the 21st century, upon our arrival, Chris and I climb out of the van and take a little walking tour around the ghosted town, with its structures that look like weathered sculptures, and busted vehicles that rest together like sleeping dogs. We assess the open doors and lacking floorboards and gather up some ideas for our night ahead. 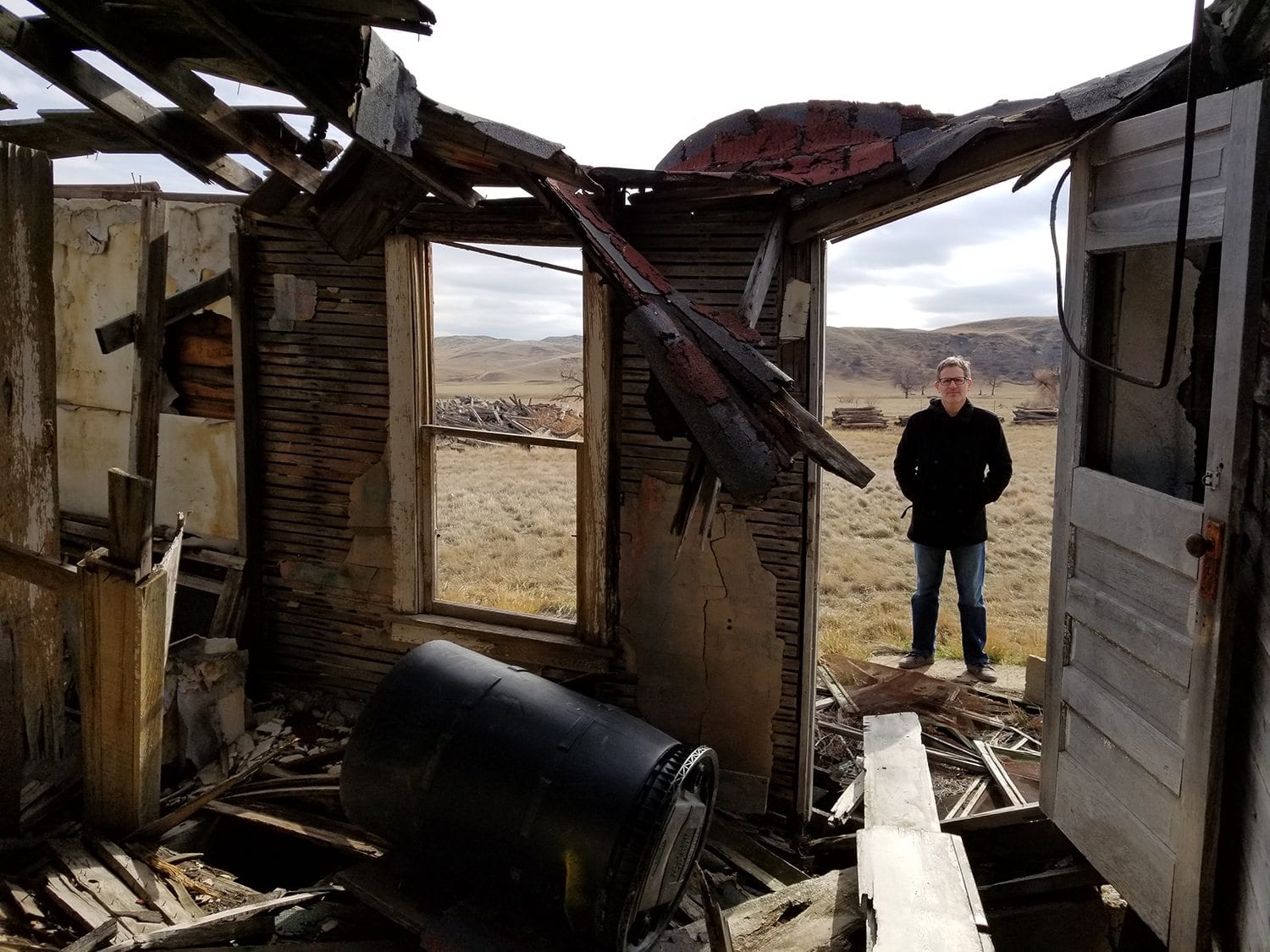 After some good times galavanting around in the Badlands, and a dinner of soup that we warm up by walking outside to a room across the parking lot, we pack the gear and head out. Flakes. Everywhere. It’s snowing. And heavily!

We press further and take our exit, but no, this is bad. We had been taking it on the proverbial chin, attempting to shoot all week despite clouds, but come on photography gods, we can’t be expected to work through a blizzard. We park the van just off the interstate, take a little spin out in the snow, and then head back for Wall and apparently a night of Austin Powers on free cable. Woot!

The following night, well, despite the early rain and cloudy skies, our trusted weather apps told us that the clouds MIGHT part a little later to show a big bright beautiful full moon. The first glimpse we’d get all week! Back to Owanka we go!

This brings us back to the township’s last remaining resident. The day before, aside from the cattle jam and the ranchers, we hadn’t seen a soul. But of course, different story when it’s 9pm near your beloved ranch and you hear tires crossing the gravel. Not moments after we drop the tripod, amongst the cacophony of a dog’s barks, we hear a truck engine start up at the house off in the distance. Headlights on. Coming our way. Chris tells me to go on and chat with the owner. I head back to the road and wave in the most polite and delightful way I possibly can. Even despite the blinding headlights, I can see a dog kinda thrashing in the passenger seat. Wooooo.

A gentleman rolls down his window and I cheerfully say hello, and try as best as I can to explain to him what we do.

Photos at night, I know I know, kinda weird.

I mention that my husband and I are waiting to see if the moon comes out. He laughs and says it doesn’t look likely.

Then I politely ask if it would be alright if we spend some time out here, that we’ll be very respectful.

He says, …..sure… Not necessarily with reluctance, but perhaps befuddlement? I gush a boatload of thanks and introduce myself. He says his name’s Dave. We nod our goodbyes. Dave and his dog head back to the house. I jog back down to where Chris is set up.

So I’ll assume this gentleman is David of the article referenced in the Rapid City Journal here: “Owanka’s few and faithful like the peace and quiet” by Ruth Moon, from September 9, 2012. The article interviewed David about living in the quote-un-quote ghost town. And I absolutely love this intro: “David Stolver likes living in Owanka township because he can hear the birds sing.” Turns out, David—aged 65 at the time of this interview—moved there in 1971, long after Owanka’s tragic dust had settled, so to speak, and raised his three sons on the ranch.

And he never wants to leave.

Per an article by Michael Zimny on the South Dakota Public Broadcasting website, the meaning of the Lakota word, Owanka (owáŋka), can be defined as “a place/space/spot/site for an activity (as for camping, pitching a tent, for dancing, etc.), battleground, campground, ground, floor.”

But most people have whittled that down to “good camping ground.”

And while Chris and I didn’t exactly roll out our sleeping bags, we may as well have. We continued to spend a good solid five hours that night, hopping about from spot to spot, over the moon (pun completely intended) with glee that those pesky clouds had parted. Finally.

In our next post, we’ll share some more of creations and videos, but we’ll tide you over with this one of the house we recorded with my phone in daylight the previous afternoon. The structure is so far gone, it’s practically impossible to imagine a home there. A family living inside. It’s easier to just feel sad, but between the warm memories people shared in their comments above, and the fact that David and his wife find peace and solace in the sleepy hills, I figure a dash of light will give this little house some life, even if just for the night. 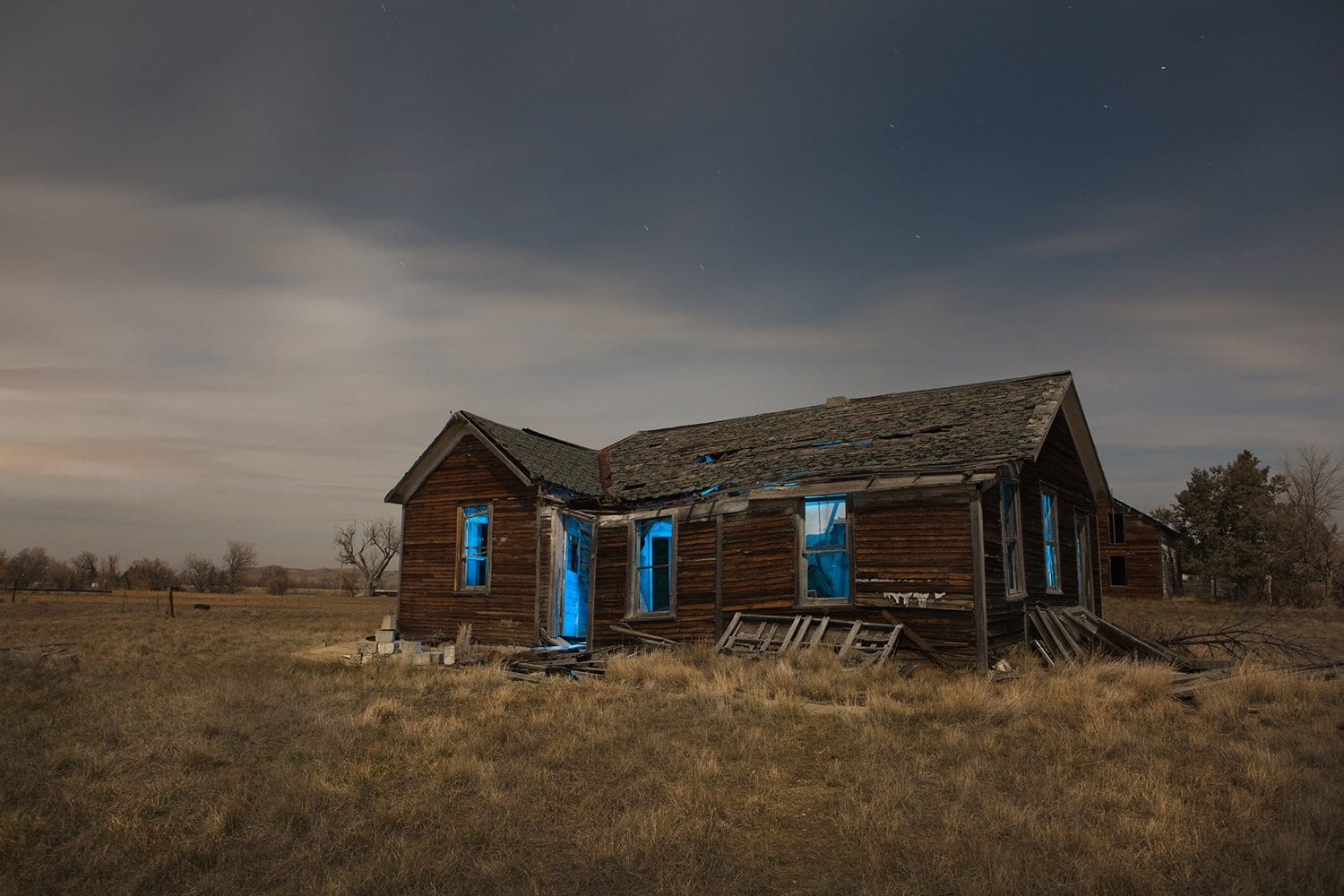 And, of course, here’s a little “making of” video to show you how everything comes together:

Song: “The Illusion” by Ikebe Shakedown*
From: Live at WFMU for Surface Noise with Joe McGasko
Courtesy of freemusicarchive.org

*Ikebe Shakedown has a new album out called The Way Home! Buy it right now!

PS! To see some more photos in the daylight of the homes, structures, and vehicles left in Owanka, head over to the Ghosts of North Dakota site and check out the photography of Troy Larson and Terry Hinnenkamp.

We’re writing about all of our Dakota escapades from this past fall. So, yes please, go read the first one.

And if “is there even more?” is your next question, watch the video we made last year, followed by a little ‘making of’ post where you can read about the equipment we used.