Pulling Back the Curtain

“If this isn’t Photoshop, then how do you do it?”

We get a lot of questions about our work, but this is the most asked, by a landslide. We answer with various bits about the moonlight, the science of long exposure, the bright colors of our flashlights, but every time, we know that video is worth a thousand words.

So…why not film ourselves during our shoots? Well, videography in the dark, that’s why. That sounds seriously challenging. Without breaking the bank on purchasing expensive video equipment, it seemed like we didn’t really have options. But as our 2016 outdoor show season approached its end, we set our sights on pulling off this stunt, hell or high water.

Enter: BorrowLenses.com. Not just lenses, you can literally rent any camera-related equipment from them! Yeah, even the Red Weapon at cool $2,450 for the week. Not really in our price range, so after some research on various Vimeo/Youtube channels, we found that a lot of people use the Sony a7S to shoot videos in low lit environments. Worth a shot, forgive the pun! 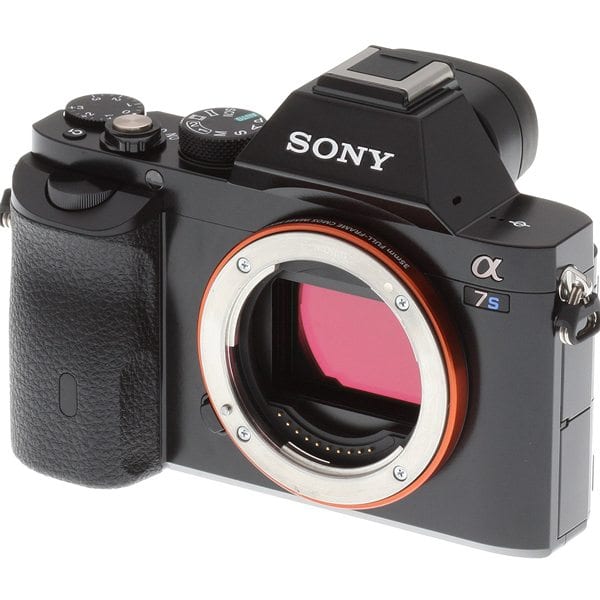 The Sony a7S + Sony Vario-Tesser T FE 16-35mm f/4 lens, large memory card, & batteries arrived just in time for September’s Harvest Full Moon. We blocked off the entire weekend and got to work. With the equipment in our possession for a quick 5 days we had to make the most of it! The only question left: Where to? We decided to travel to a couple old familiar friends in order to eliminate any unknown factors as we grappled with this new creative art-form and equipment.

Without any Sony camera experience, to get warmed up and work out the kinks, we stuck around the home base and filmed at a nearby Milwaukee park. The weather played nice for a little while. We set up shop, our Canon 5DMkII on one tripod, the Sony on the other. Next challenge: record and operate both at the same time, while Katie did her light-painting thing. The camera is pretty user-friendly, so onboarding came pretty quickly after a few attempts. Suddenly there it was. Finally. A video of our process!

Katie danced around to create various light drawings of turtles and TVs with the Night-Writer light pen (created by DariusTwin). While light-drawing isn’t Katie’s strongest suit (don’t quit your day job?!), this night was meant to be a bit more whimsical. Eventually, the rain arrived and we had to head for home. 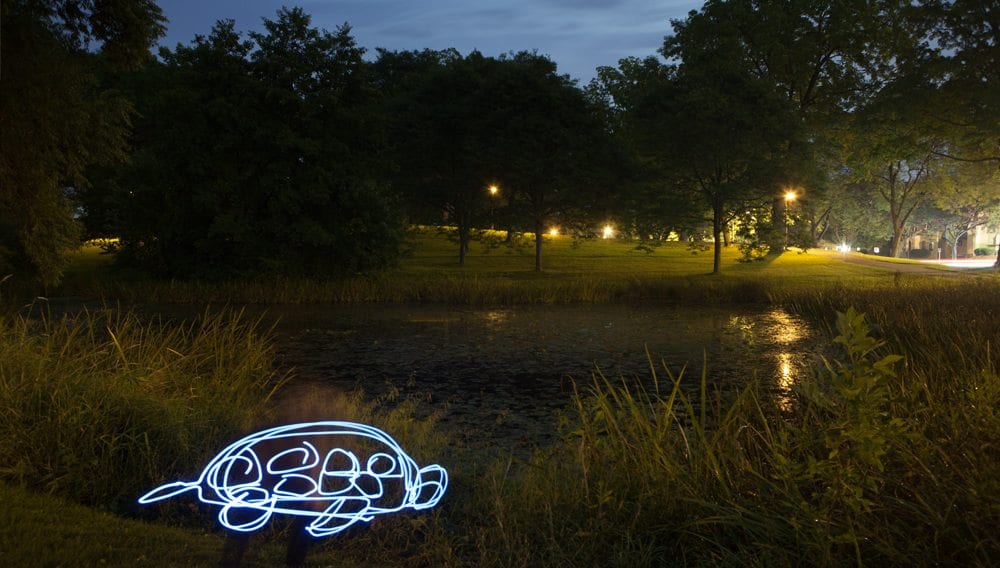 We jumped in the car and headed south to a little schoolhouse in Illinois a couple hours away. The sky was deep blue, clear of clouds, full of stars, with a beautiful full moon hung low in the horizon. Truly a perfect night to film. We captured both external and internal shots and played around with car trails. 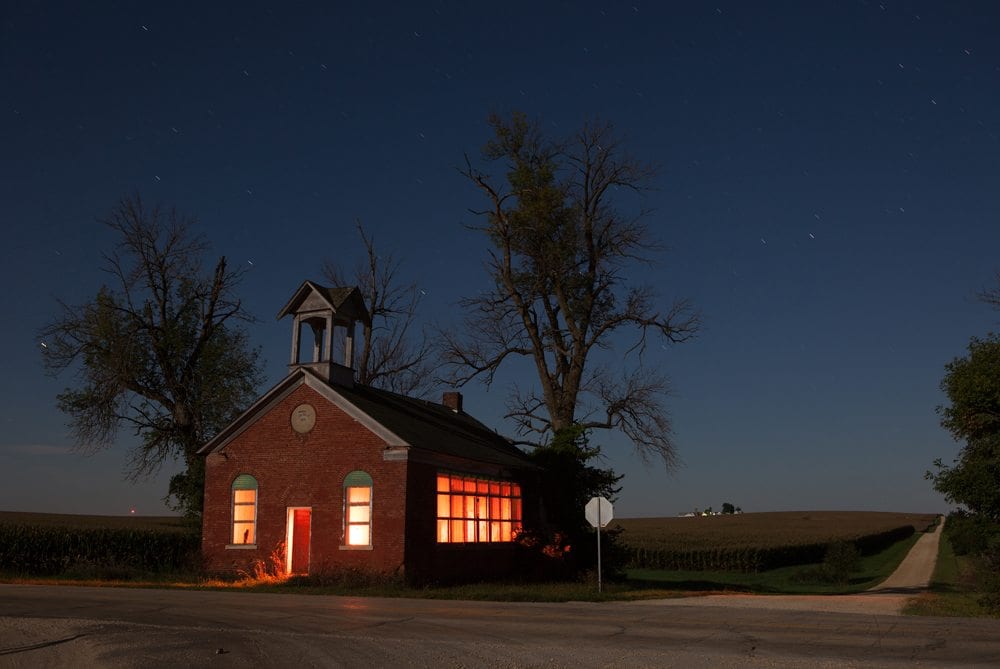 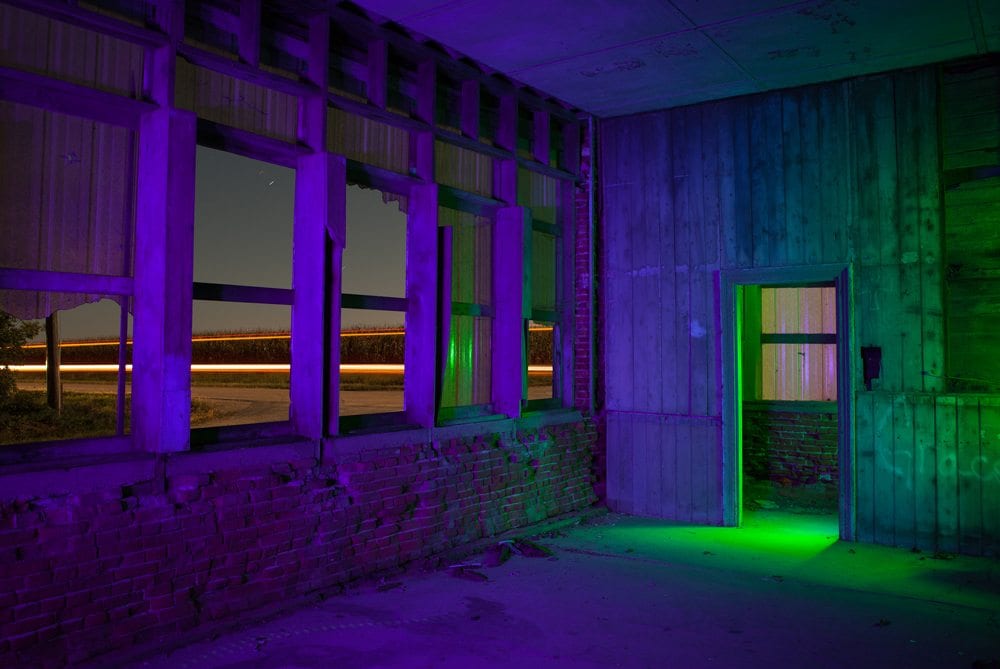 Another familiar friend: a favorite old house in Northern Wisconsin. This time, the weather was definitely not on our side. Just a few minutes into our shoot, a thick cloud-cover started to roll in, covering up the moon so the house was extra dark and moody. Three hours away from home, no turning back now! 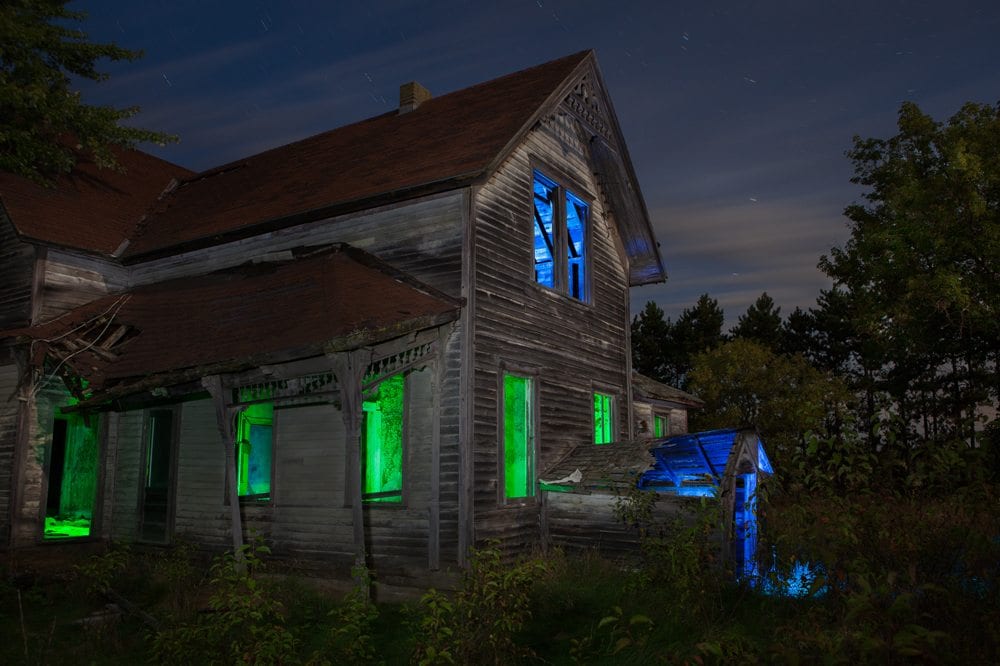 You’ll see in the video that—despite the minimal moonlight—we have little-to-no-sight ourselves while we walk around these buildings in the dark! There’s a point midway through the vid where I trip and almost face-plant—with a $5000 of rented camera gear—into a set of stairs. The video also illustrates how lo-fi we can get with our equipment. Without a fancy mini pod, I had to use a couple of crusty bricks and tree branch to balance my camera in the broken back window of a rusty car. 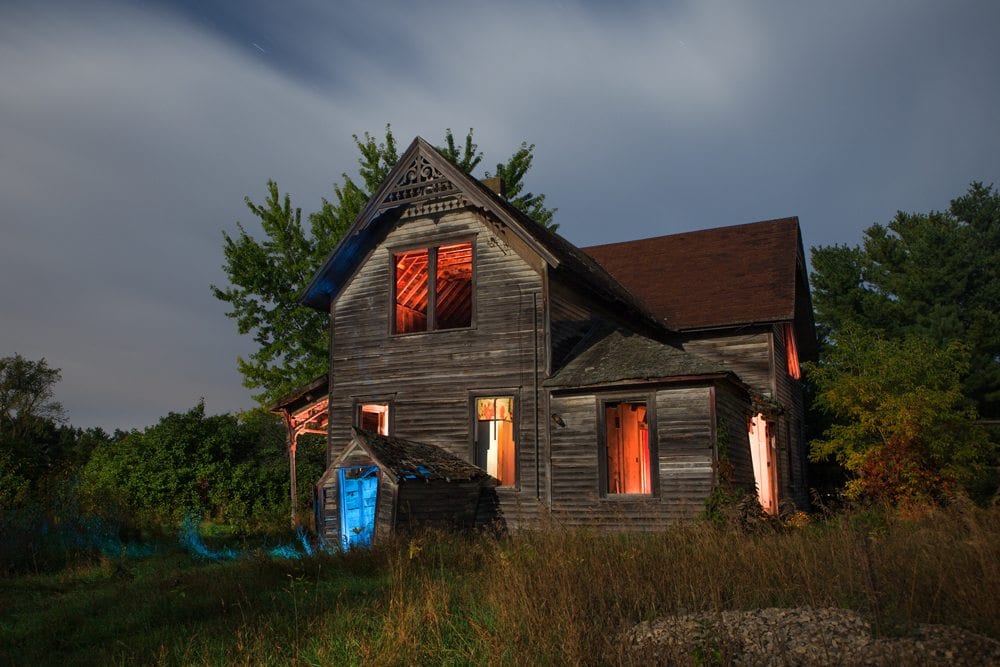 While the clouds were in full force, we shot some interiors that didn’t need moonlight. Because we were a little more familiar with the camera, we also pushed ourselves to get a little more adventurous as we filmed our technique. Katie must’ve put on her film editor hat because she suggested shooting all kinds of bits and pieces that would eventually tell a bigger story, as you’ll see in the vid. 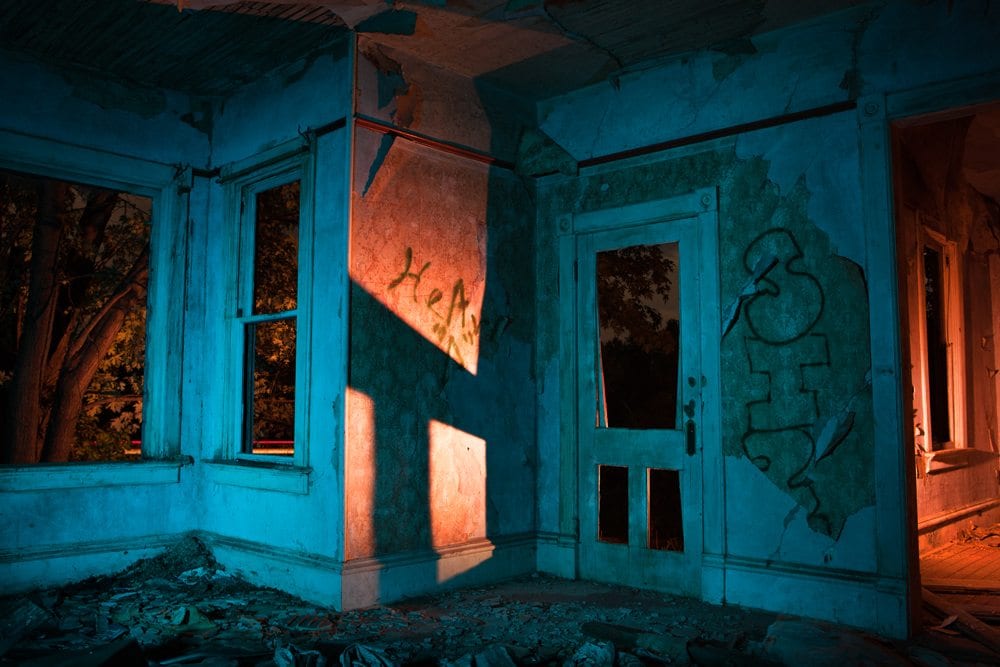 After way too many exhausting takes trying to film Katie light-painting the entire house, we packed up and headed for home: a long, dark three hours away. But we had plenty of material and felt confident mailing the precious Sony a7S back to Borrow Lenses the following day.

Next came the video editing extravaganza, by far the most challenging phase of this endeavor. But Katie—having zero experience in editing or Adobe Premiere—took it in stride and ran with it, full throttle. She combed through at least 4 to 5 dozen clips to splice together a “greatest hits” of our three nights. But more than that, she sketched out and produced an actual story to really show everything that goes into our work: from talking about equipment we use (like the Protomachine LED2 flashlight), to what it’s like to walk around the rubble under our feet, to a little glimpse into the amount of trial and error that goes into just one image. And icing on the cake: finding a sweet funkalicious tune to go with it, thanks Polyrhythmics!

So we crossed the Big Video off the ol’ bucket list. But that’s not the only reason we wanted to venture into the new world of video. When we traveled to the Dakotas this past fall, we planned on shooting something that would end up as a one-of-a-kind photograph…a rare offering in the world of photography. While we’re still settling on which photo it’ll be, we plan to offer this “OOAK” more often. In fact, we may couple the photograph with a video of us shooting the location as a bonus.

Details to come, but in the meantime, check out our “greatest hits of the harvest moon” and stay tuned for plenty more adventures to come in 2017!

Watch the NEW video we created from our recent night photo adventure to the Dakotas. And then, to kill some MORE time, read a little more about the process and the trip.