the chatter of the corn husks

on the old school road”

It’s Halloween night. Chris and I pull into Mitchell, South Dakota, wrapping up our first day’s worth of road trip: a little over eight hours straight, barely any stops. Yet again, we are on the search for gold. AKA: something particularly unique that we can offer up as a one-of-a-kind, just like we did last year. 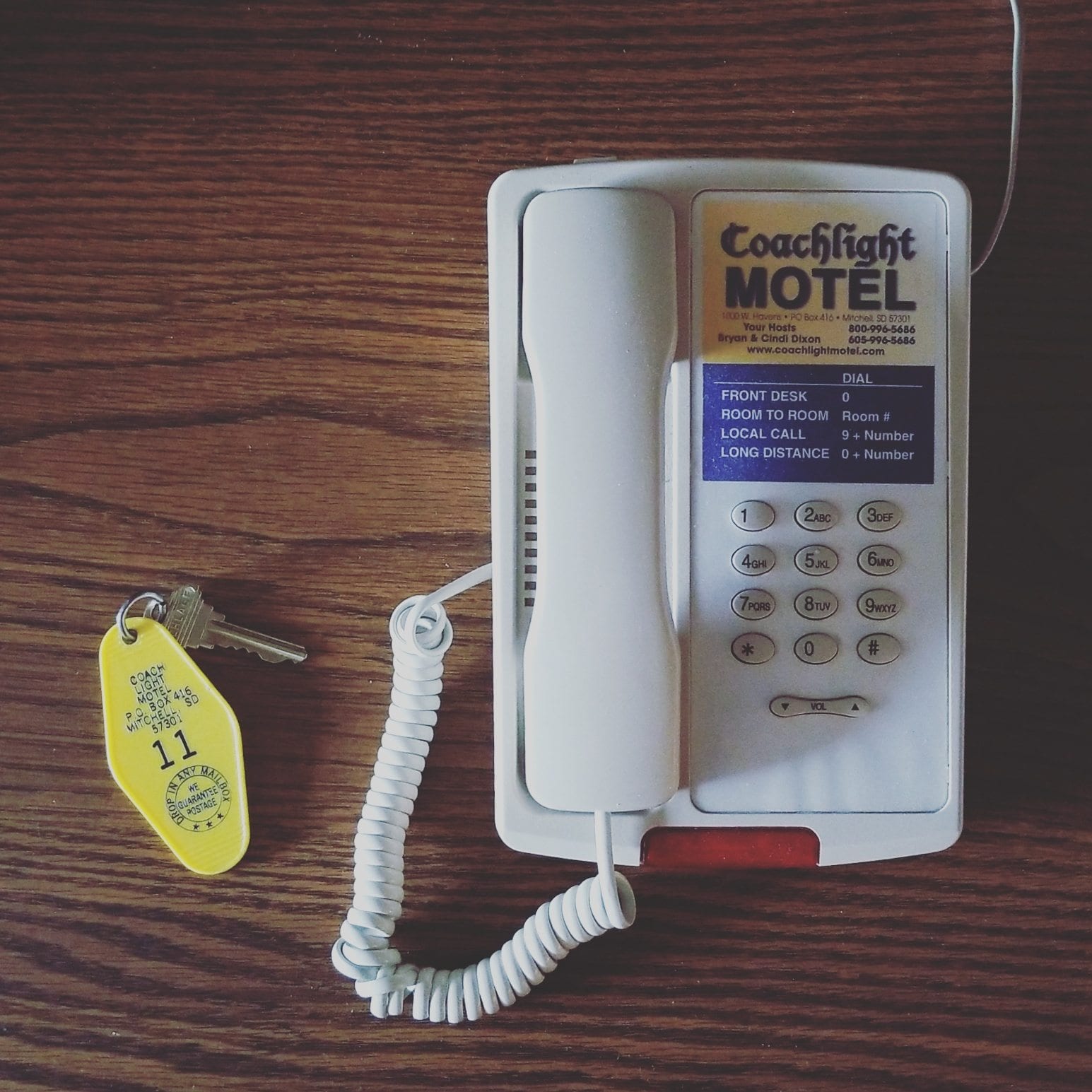 We settle for just a bit in our midcentury-era, mom-n-pop motel room, nestled just outside downtown Mitchell, to make a quick bite to eat. Later on in the trip, we’d realize how much we took in-room microwaves and refrigerators for granted. Coffee makers too. 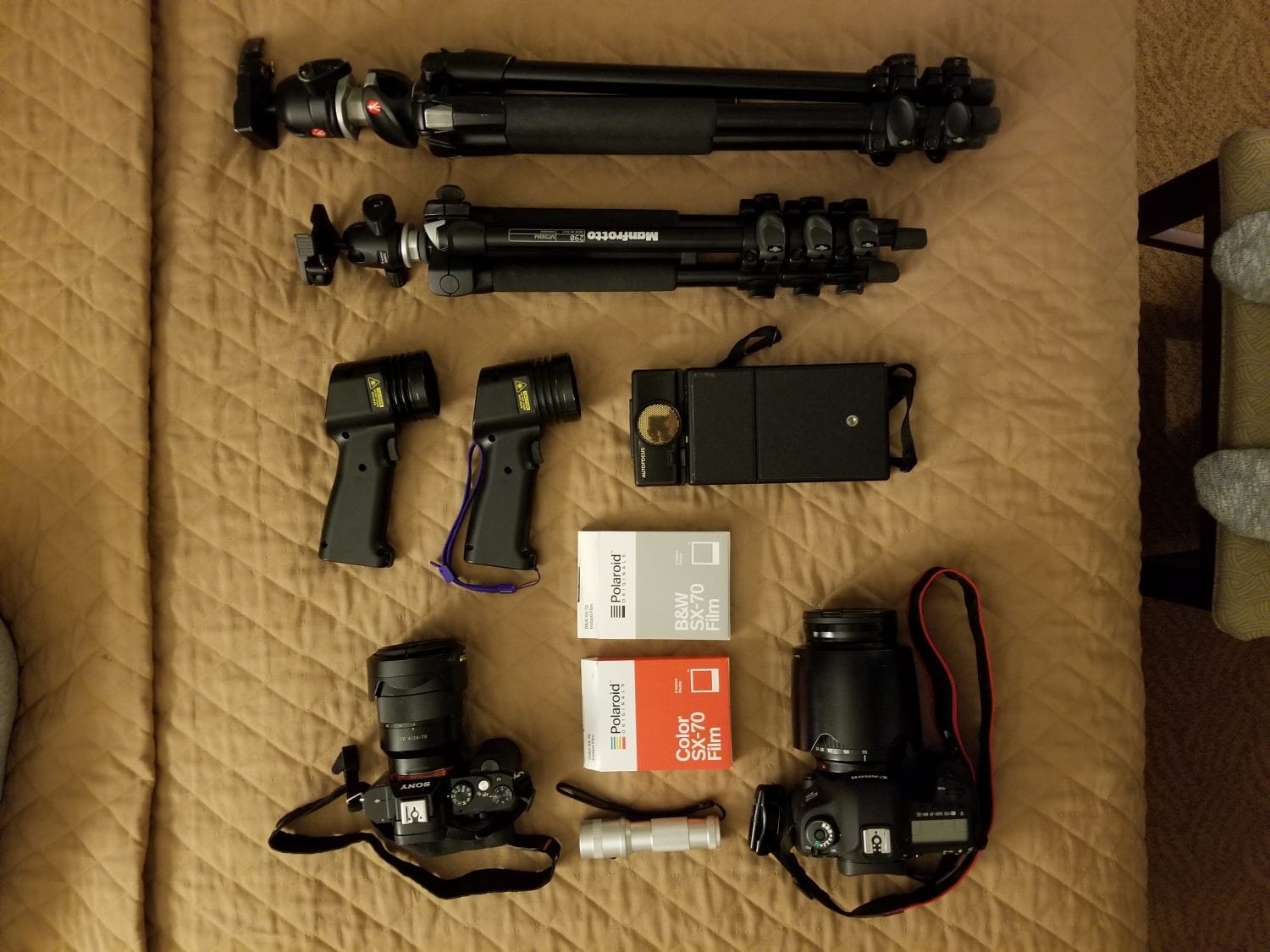 With our gear displayed on the bed in full regalia, to make sure we don’t forget anything, we throw on as many layers as we can. My weather app warns me of 25+ mph wind gusts and it’s only about 18 degrees without considering windchill. It’s nearly 10pm and despite a sky packed with cloud-cover, we’re off into the darkness, the glow of main street, safety, warmth, cable TV…all fading off into the rearview mirror.

Through black tunnels of two-lane biways and side roads, about an hour later, we reach our very first destination of our semi-planned, week-long trek through the Dakotas: a rickety old house near the township of Esmond. With a soft closing click of the van door, we hoist our tripods, cameras, bag of lights over shoulders and stroll up through the yard, dodging the frozen cow pies that scatter the property.

Yep, wind. Wind like a rush of ice water blasting from a fireman’s hose across your face. And we couldn’t tell if it was sleeting or if the gusts were just shaking all the frozen bits of earth and cow pies around like being inside a dirty snowglobe.

With all of the expected trepidation and due respect for a location we’d never explored, we gingerly circle the house, peak inside windows, and take a disappointed glance at the sunken porch. Perhaps if this particular location was later in the week (when we’d had enough practice with sunken porches to forge bravely ahead)…perhaps if the wind wasn’t sheering away our guts…perhaps if it wasn’t so seriously cloudy…we would’ve climbed right in and had ourselves a look around inside. But we turn our backs to the sad little house and agree: maybe we just take an outside shot, roll a little video, and call it on this one.

Knowing full well the wind is going to make a clear shot virtually impossible, Chris sets up his tripod anyway. I’ll skip past the part where we try next to a million times to light the front of the house with our Protomachines flashlight, over the course of just the right amount of seconds, at just the right angle. The quote-unquote ‘best’ shot looks more forlorn than the actual house itself. This is why we really need the natural moonlight. This is exactly why. 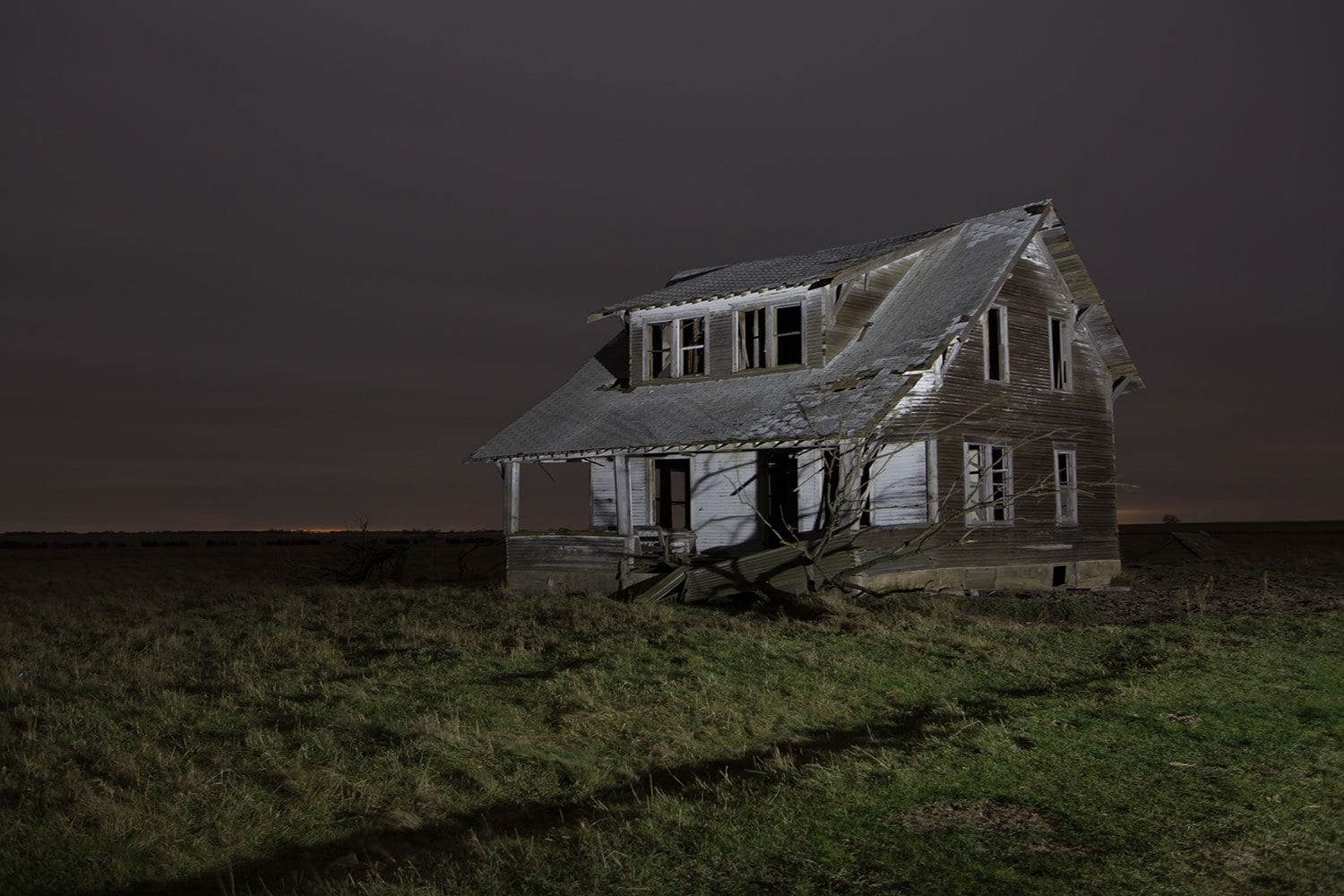 To salvage something from this night, I grab my phone from my pocket, reluctantly take off a mitten, and switch open the video, and hand it to Chris. So here’s a 14 second glimpse of pretty much not much at all, but at least you get the 25 mph drift:

So sets the tone, the mood of our journey. We gather our stuff, push through wind back to our van, and return to town. The bright lights of Mitchell eventually appear from the ether. In absolute bitter irony, The World’s Only Corn Palace is gaudishly illuminated—light-painted, if you will—with bright blue. And this year’s theme? South Dakota Weather. 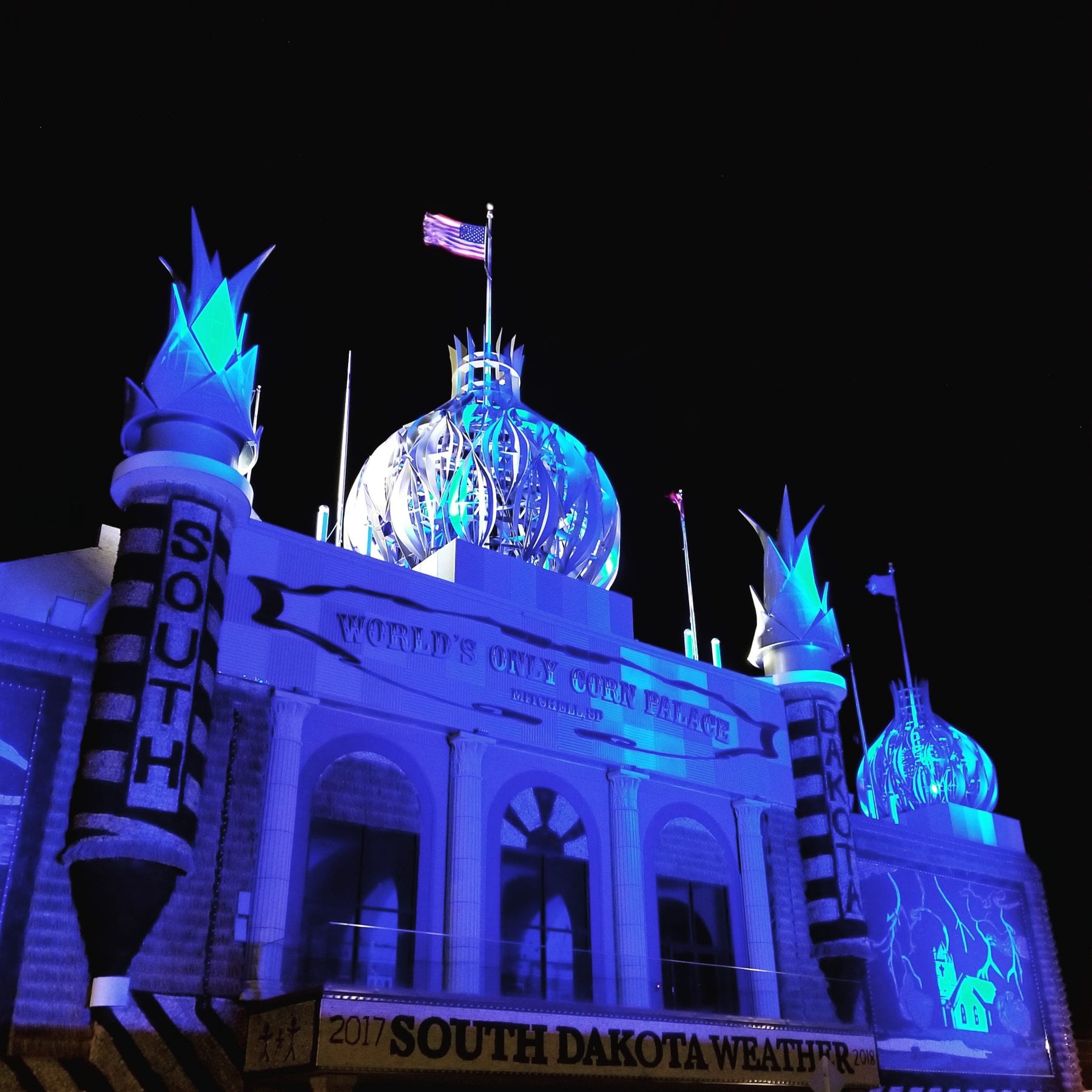 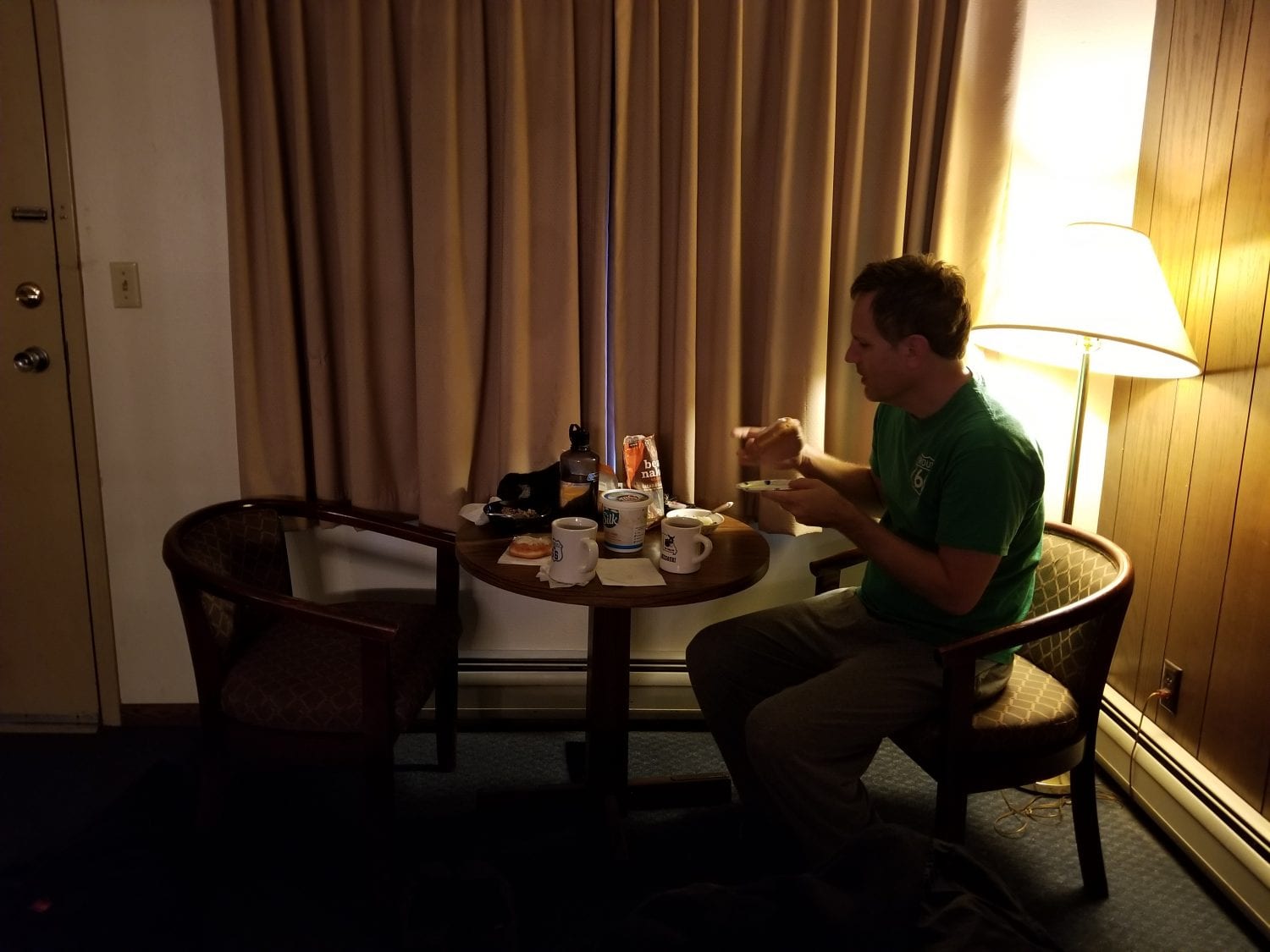 As we scarf down our in-room breakfast of yogurt, granola, and donuts from the motel office that was packed full of Dakota men sipping their morning coffee, chatting about the previous night’s epic playoff game, Chris and I discuss the hard, but seemingly obvious choice: maybe we should turn around. We were only in about 600 miles of gas and one night’s worth of motel. The only thing is, we had just purchased the new Protomachines LED8, and also dropped some heavy dollars to rent a Sony a7s, plus lens, for the entire week to shoot video of our ventures.

Well. In for a penny, in for a pound, they say.

So we decide to give it another night’s go… 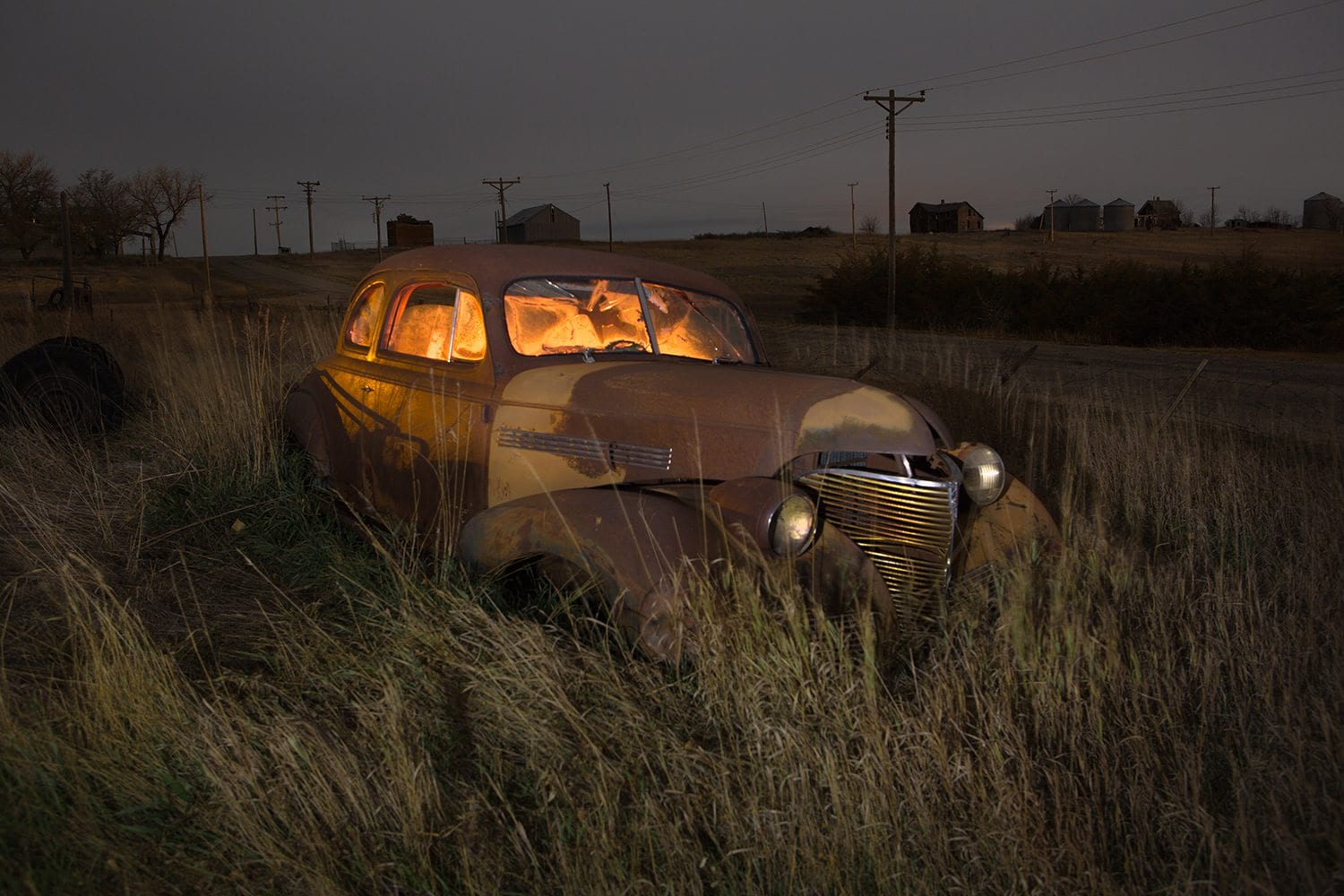 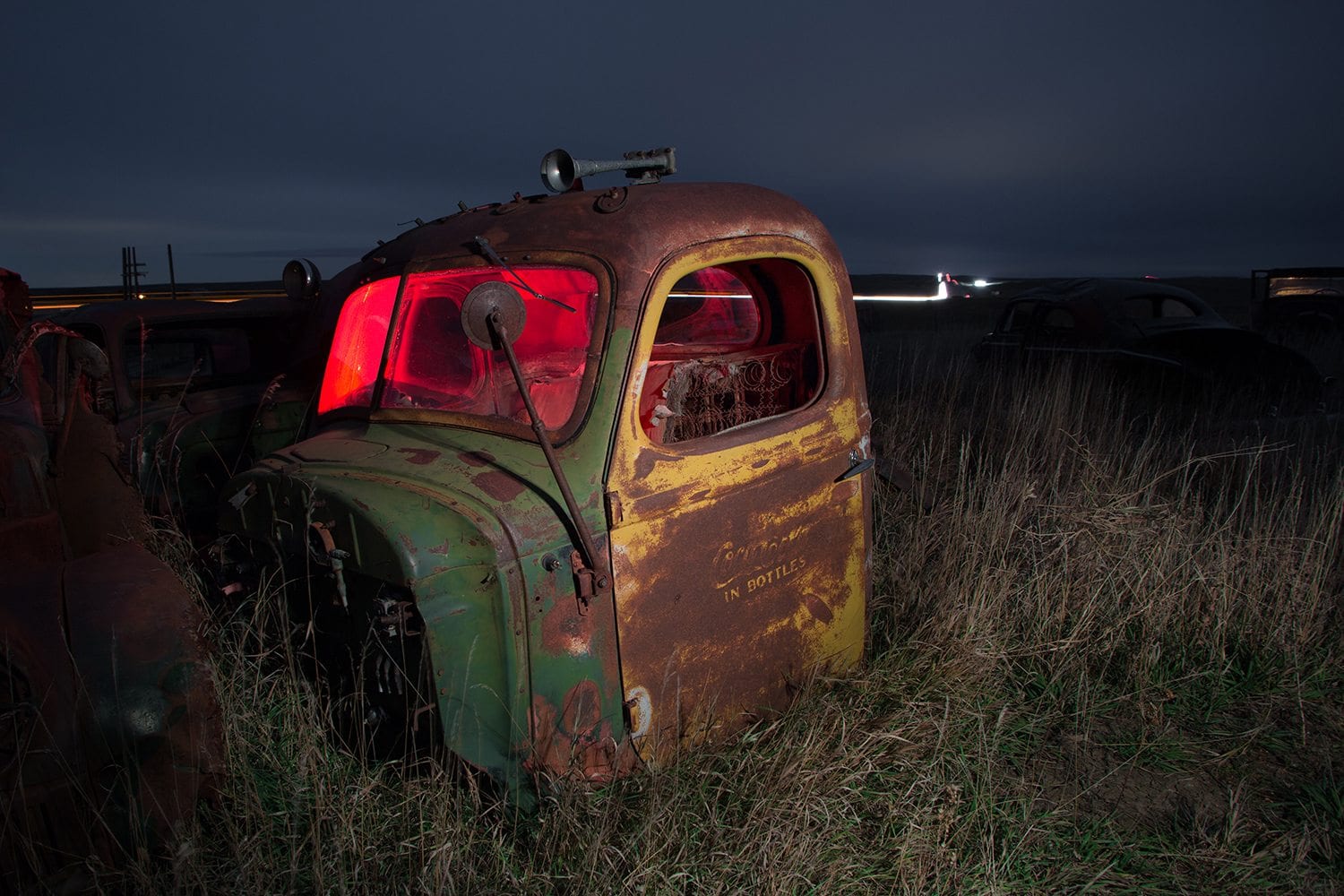 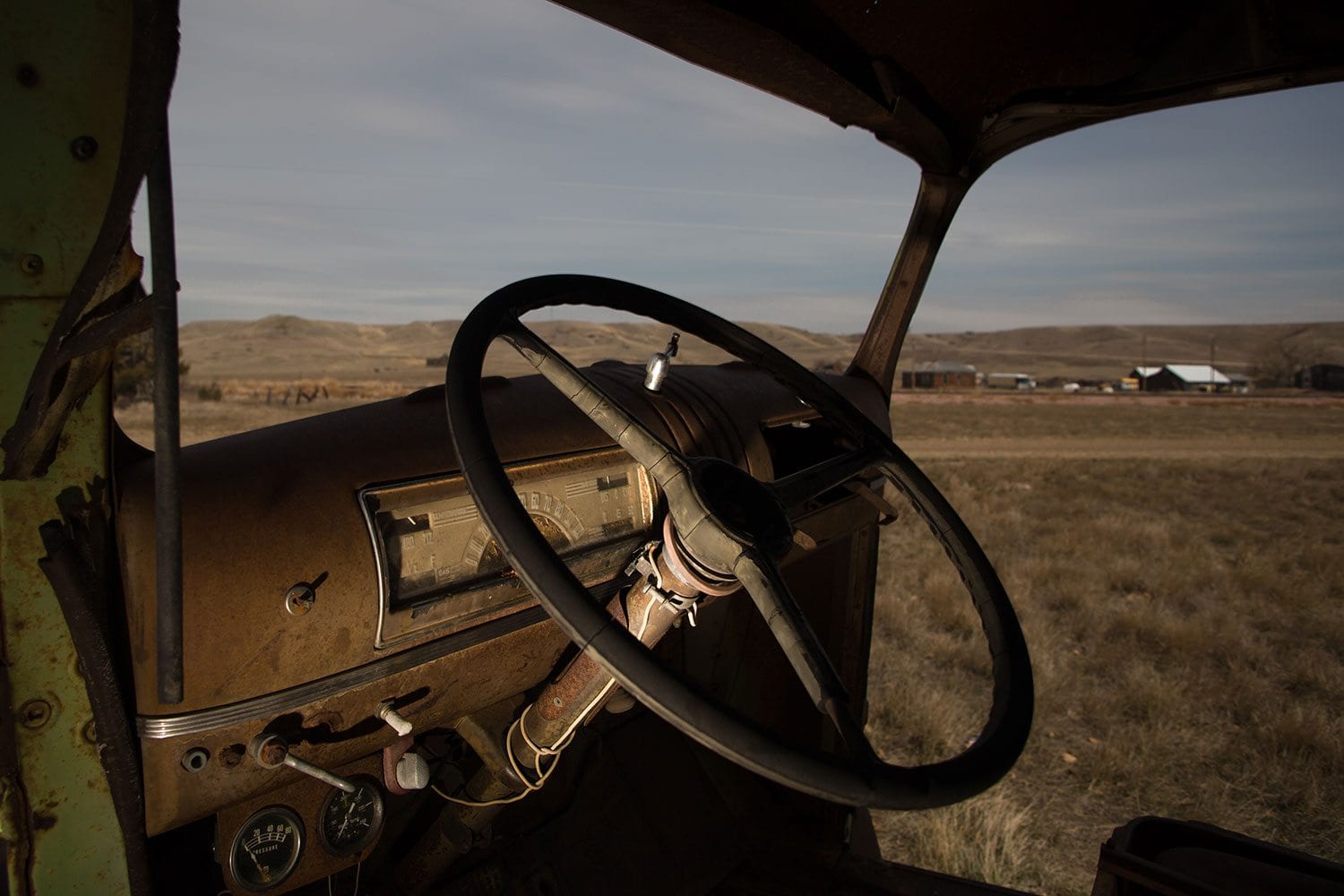 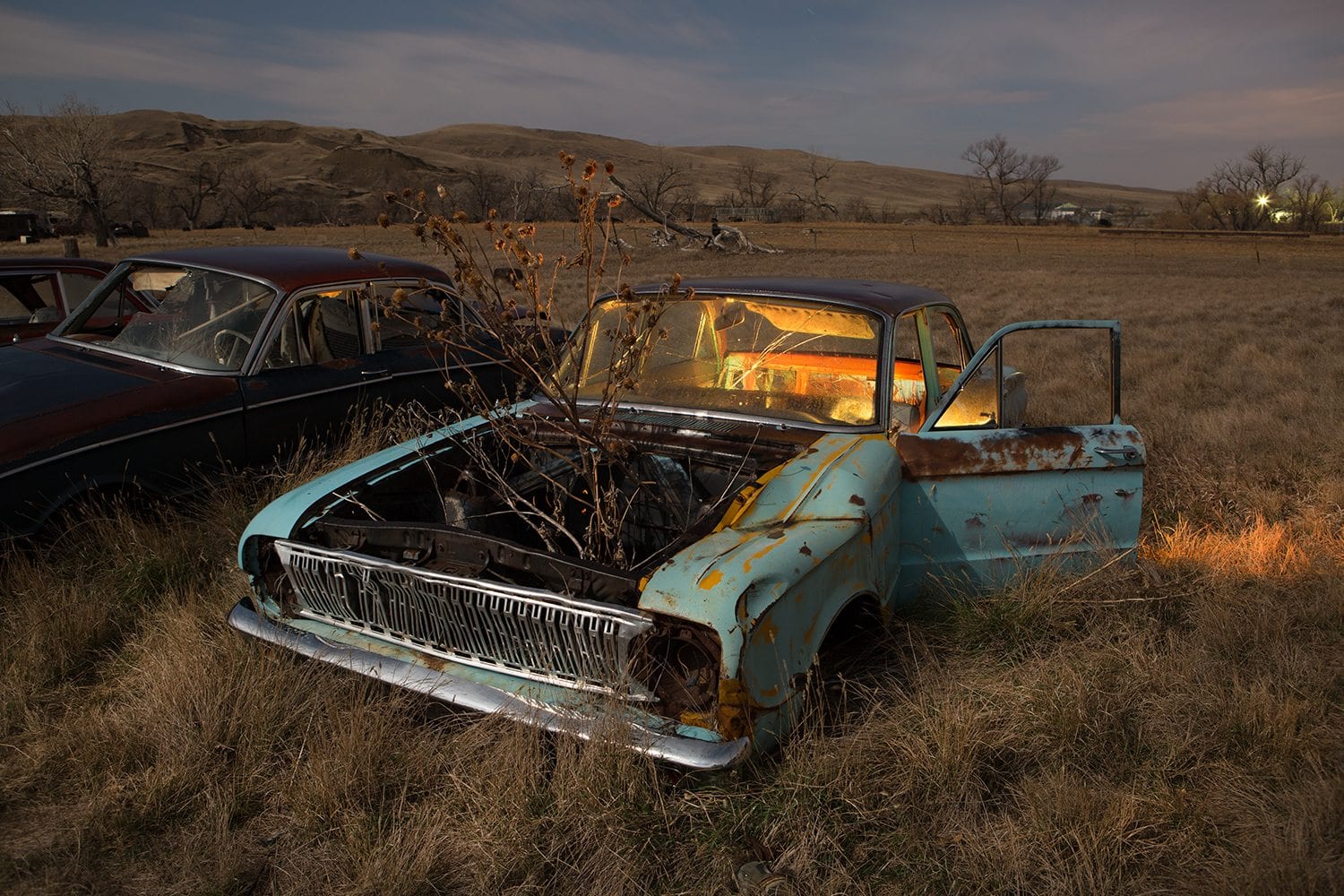 …And even despite the clouds, and actual blizzard with zero visibility, wind chill hovering around 4 degrees…another night and another… 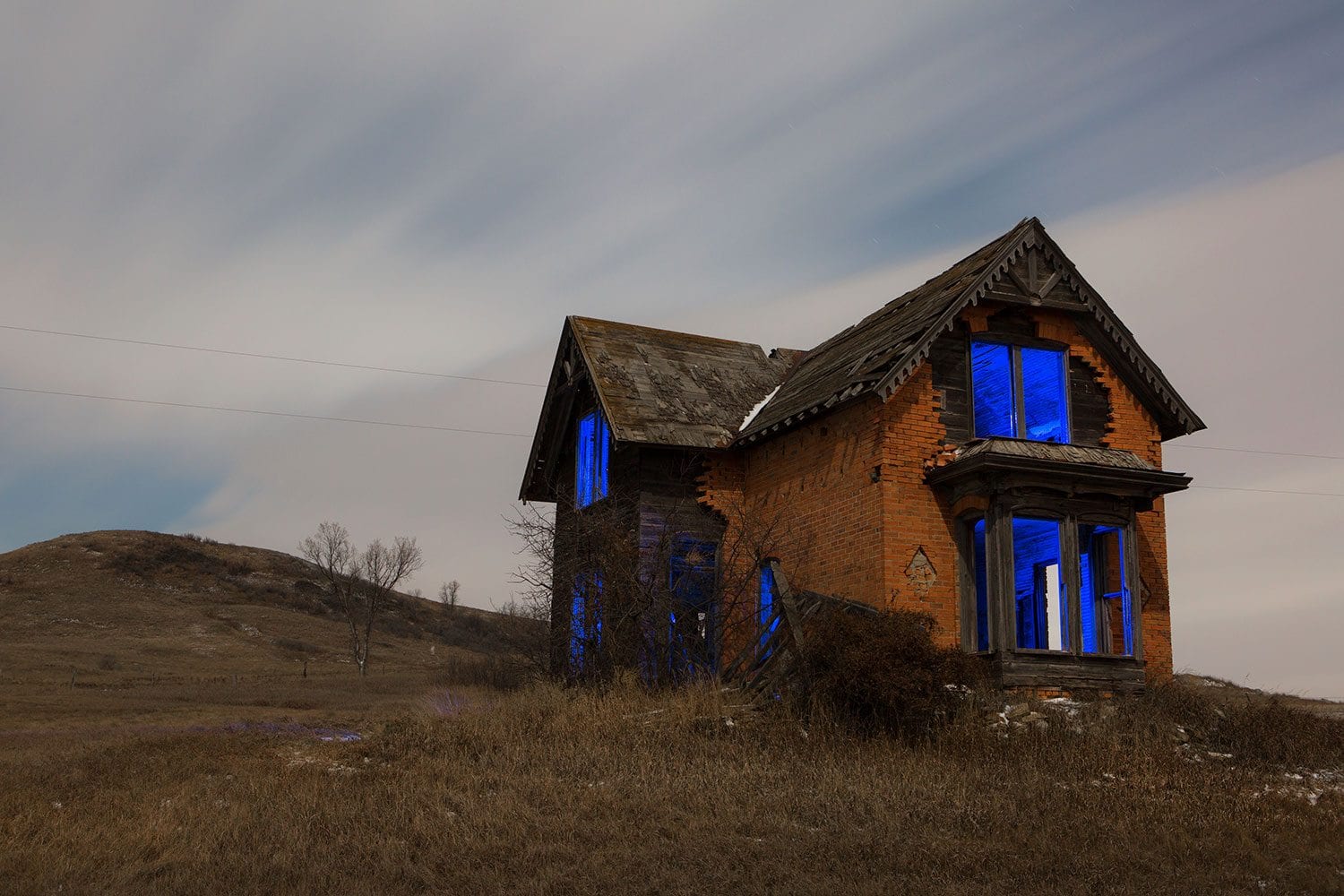 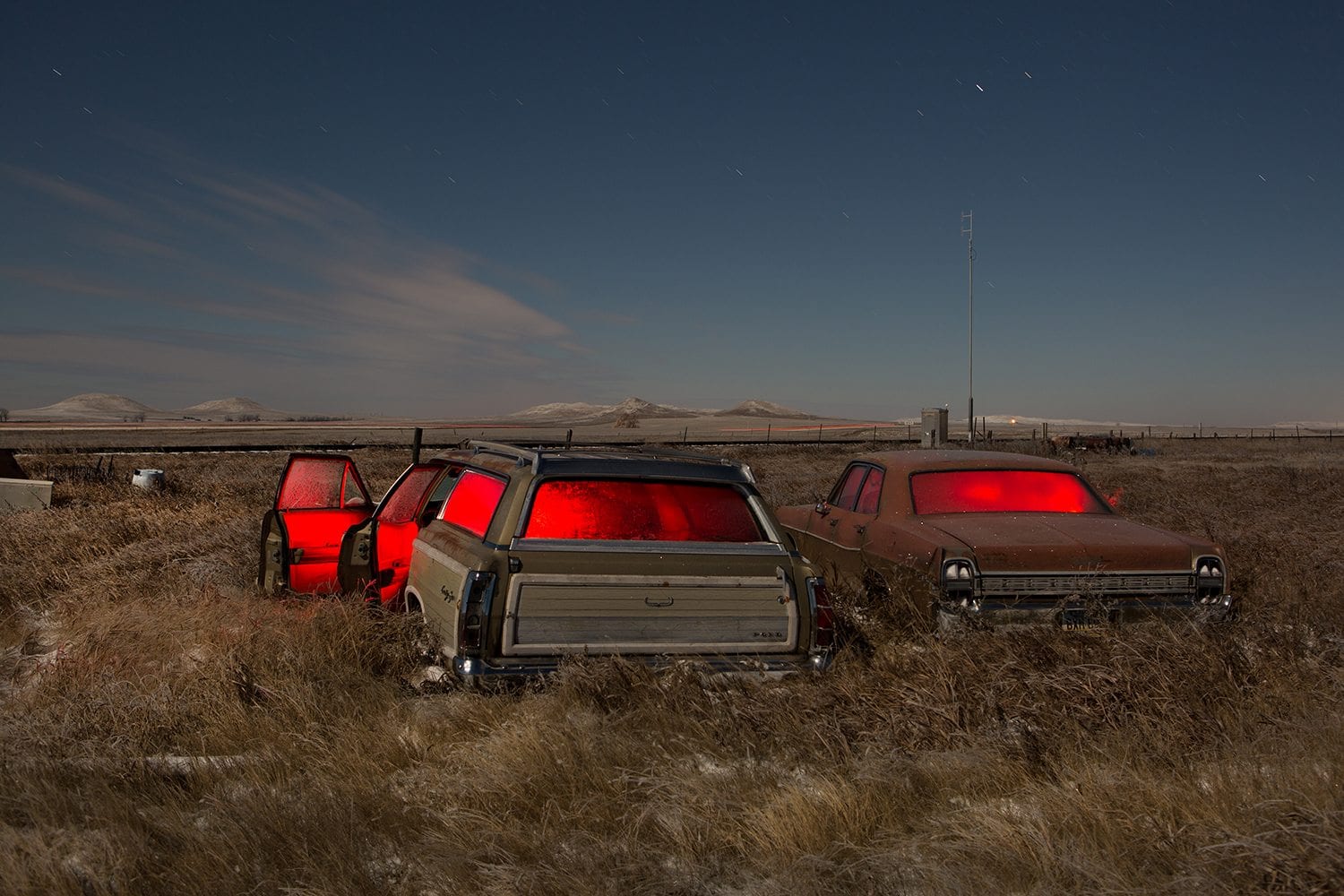 And for our perseverance, chutzpah, gusto, and well, stubbornness, we are handsomely rewarded. Despite weather apps with their snarky stats and icons, the Dakotas gift us clearing skies, a packed ghost town, and one particular spot that challenges us in a strange way, but again, success was ripe for the taking. Over 3000 miles later, we’ve got plenty of tales to tell.

With that said, here’s a new video we created for you just so we could share how it all unfolded. In the coming months, we will post additional shorter videos of how we created six shots along the way, so stick around! Now let’s do this!

How do we paint and draw with light? Glad you asked! Here’s another glimpse into our process, our tools, and our little world here at the Flash Nites. This past fall, we took another trip to the Dakotas, including ghost and nearly ghost towns of Owanka, Okaton, Griffin, and Sims. Explore the lost. Play in the dark. Illuminate history.

Song: “Penny the Snitch” by Ikebe Shakedown*
From: Live at WFMU for Surface Noise with Joe McGasko
Courtesy of freemusicarchive.org

*Ikebe Shakedown has a new album out! Buy it right now!

Watch the video we made last year. And then, to kill some MORE time, read a little more about the equipment we used.