A Field Report in the Making

“Here’s to the loaded places that we take ourselves
When it comes to luck you make your own”
~ Bruce Springsteen,“Lucky Town”

We’ve been on quite the wild ride these past few months. And the crazy thing is that it kinda hinged on a little decision we made a year and a half ago. So consider this our little gushfest of a love letter and ode to Field Report’s Summertime Songs, and the part we had the honor to play.

Back in September 2016, we were struggling a bit with how to expand our work into some sort of new dimension and connect a little better with our people. Pull back the curtain, so to speak. Make it easier for our people to understand the technique. Maybe we video record ourselves during the process? So we decided to rent a Sony a7s from BorrowLenses for the weekend. On Night 3 of the Harvest Moon weekend, we ventured several hours north to the outskirts of the little town called Crivitz, Wisconsin. There’s an old house there that feels like our second home, we go there so often. A perfect comfort zone to experiment with the Sony. 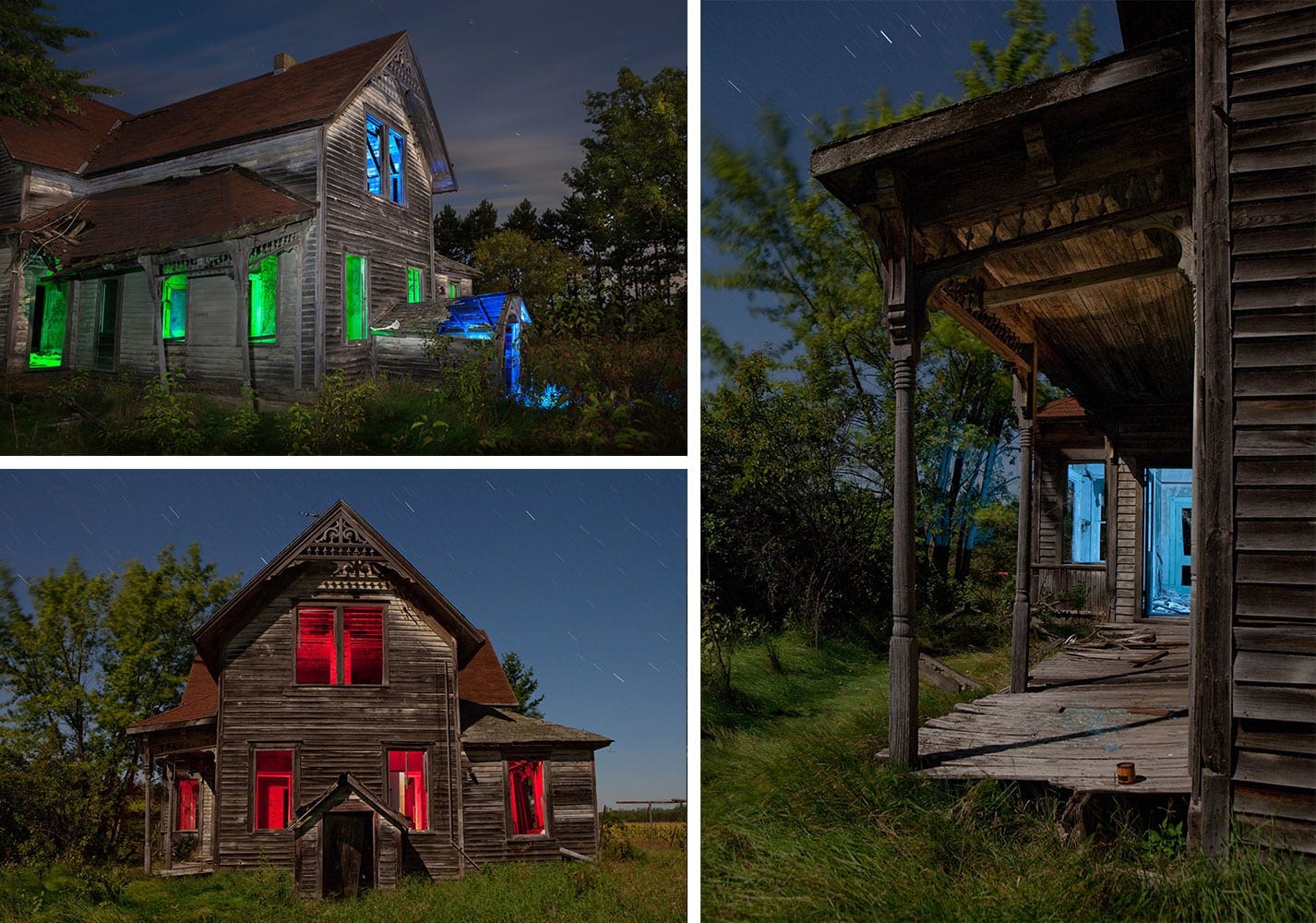 The full moonrise was a late one that night, so we sat in the car for awhile waiting for it to climb up over the treetops. That is until we noticed that thick clouds had completely hijacked the sky. [If you’re just joining us, moon = main light source for night photography. Sure, we can use a bare flashlight instead (been there), but the moon is way more natural and efficient.]

We were hours from home, on our last night with a relatively expensive rental in tow, so no turning back now. But we needed something to do while we waited for the clouds to roll out. An old ’50s Ford V8 Customline just so happens to sit on the property, nestled amongst a bunch of trees and refuse. We’ve tried to photograph it before, but the black paint job just isn’t conducive to night photography, especially without a moon as a pivotal light source. As we circled around it, I took note of the busted-out back window and suggested we try to shoot inside of it, right toward the iconic dashboard.

We were without any kind of mini tripod, so we had to make due with a couple nearby bricks, leveled out with a nearby tree branch. I grabbed our Protomachines flashlight and climbed all over the rubble—careful to avoid the nails in the wooden boards and shards of glass in the windows—with a stream of police sirens as our soundtrack. It took a few tries but we knew we were onto something . . . 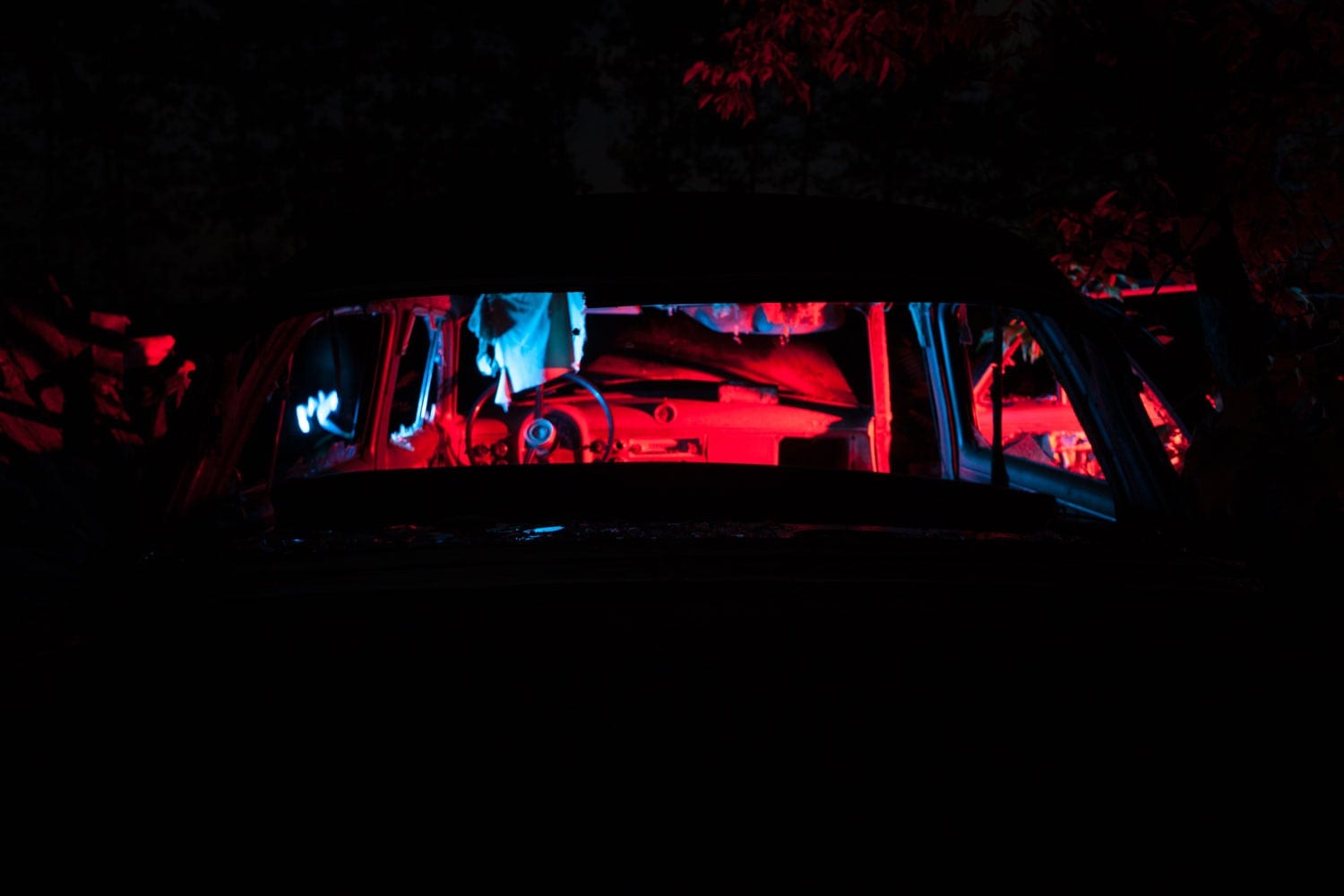 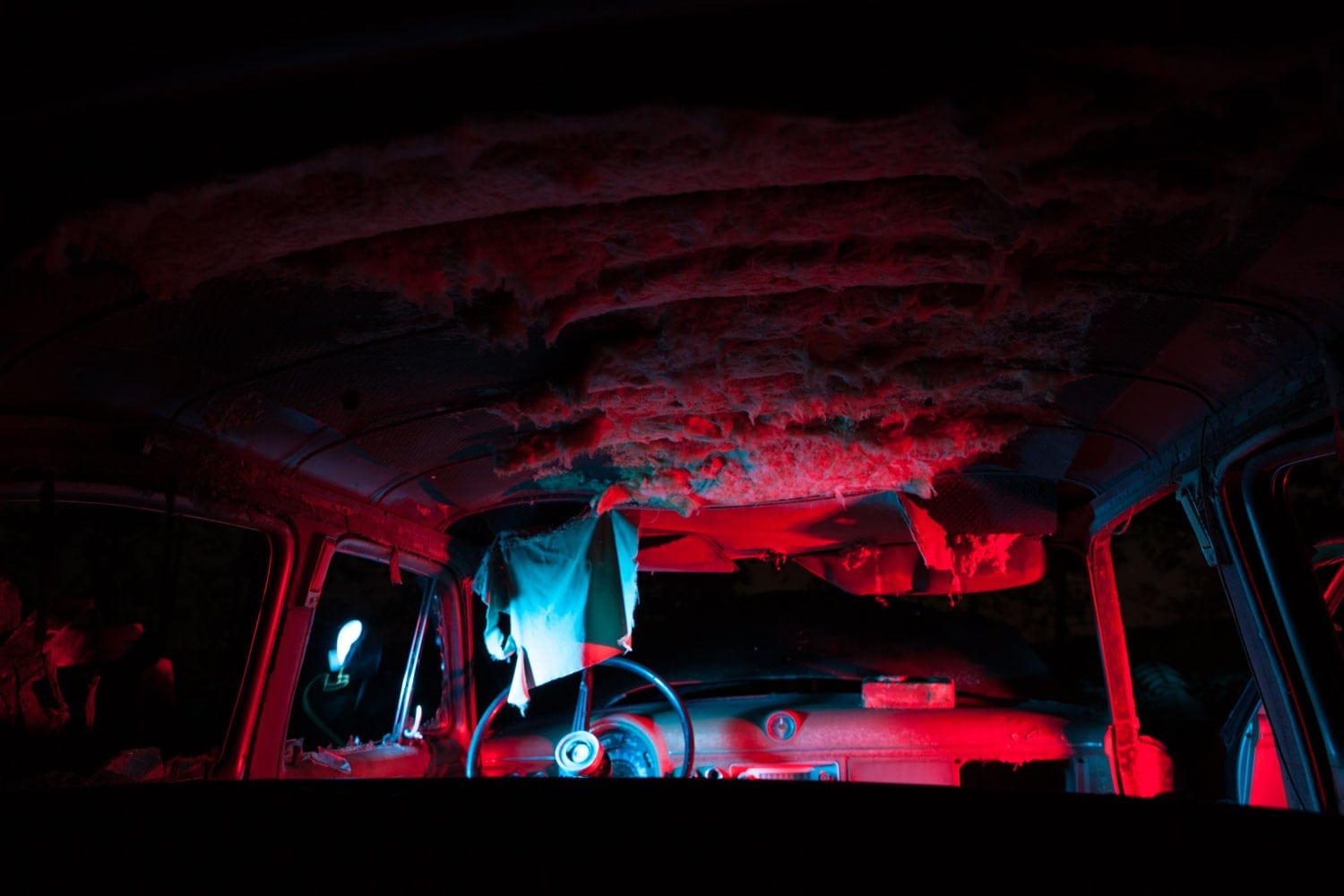 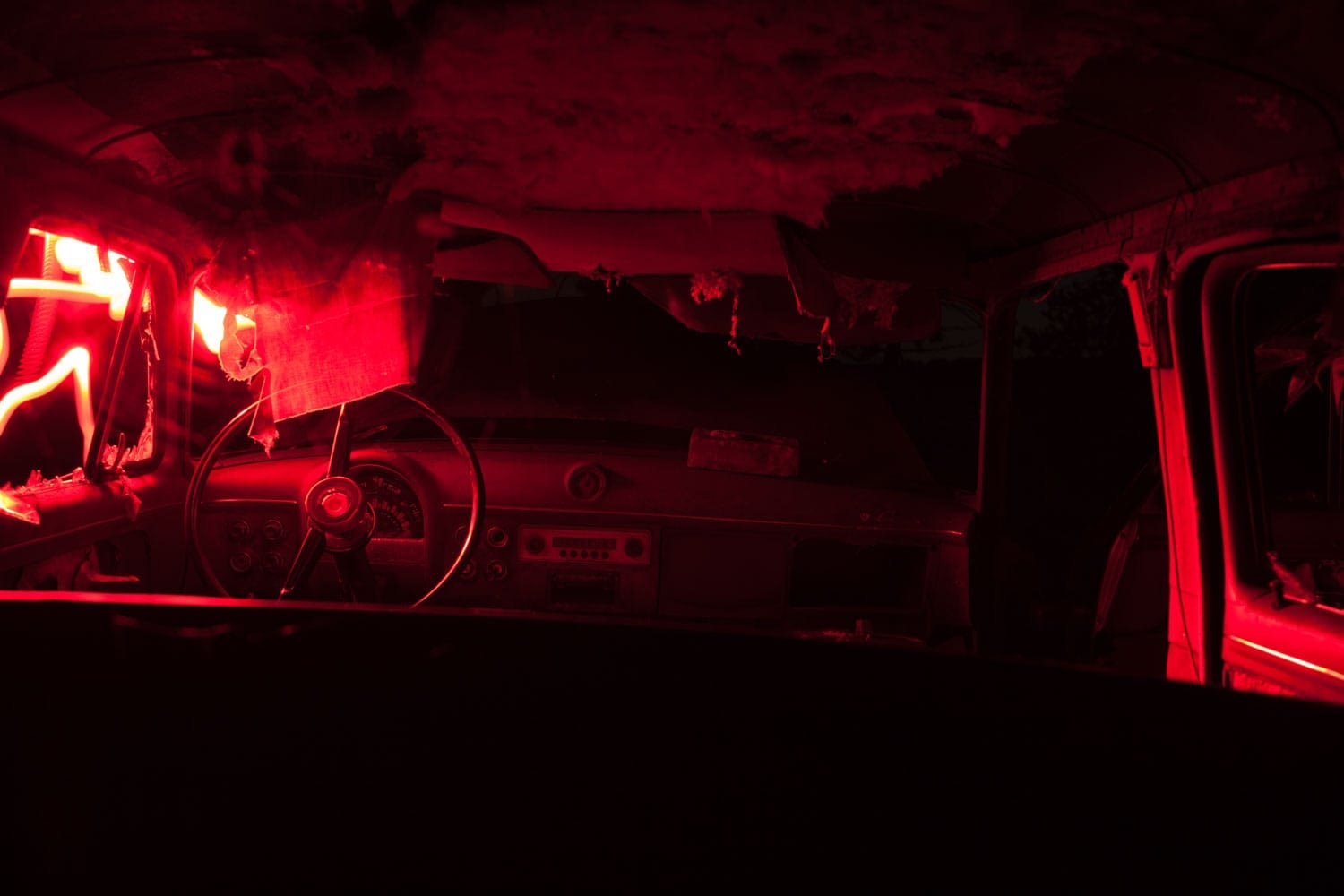 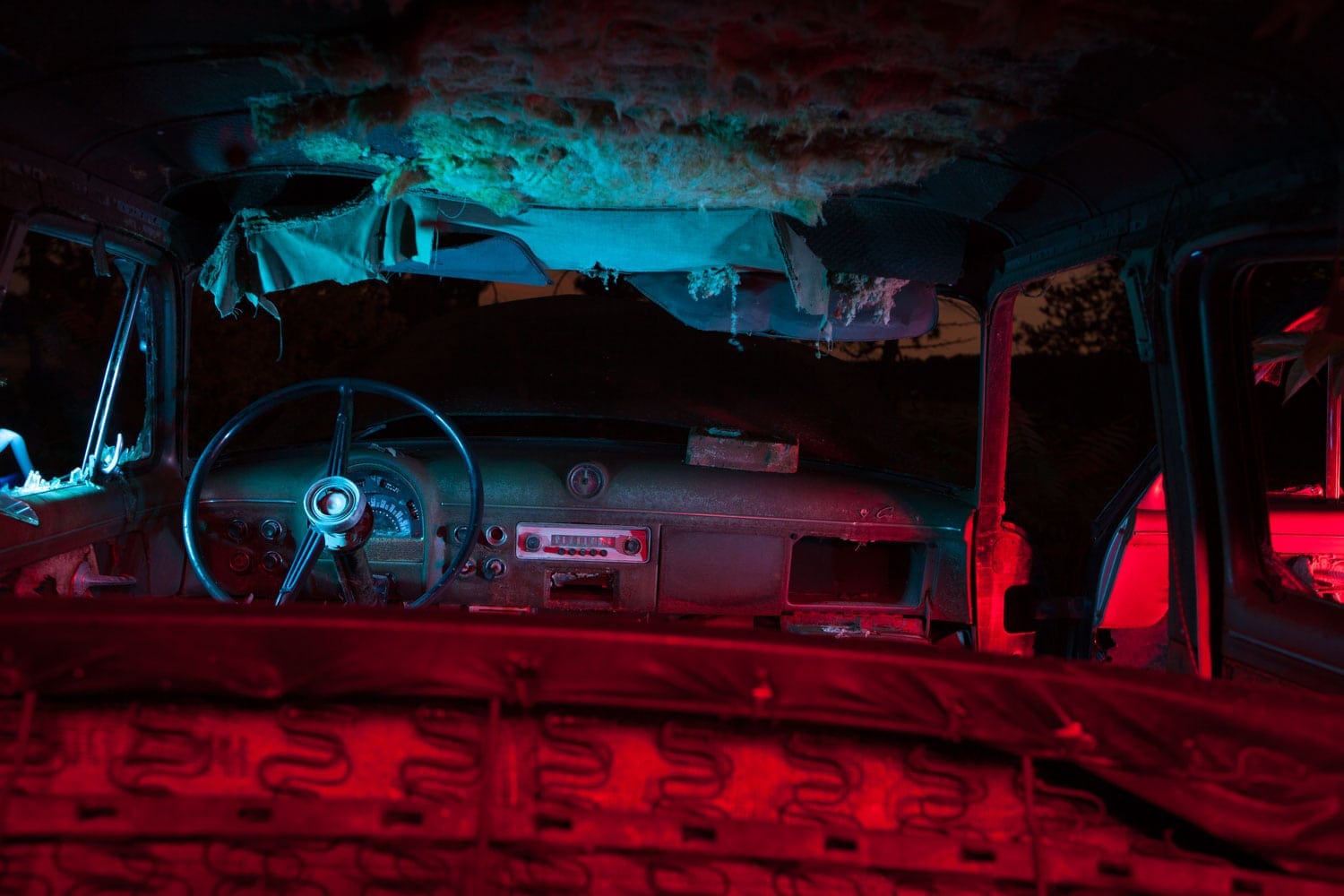 To get a better glimpse at the experience, check out the video we made with the Sony a7s . . .

Yeah, despite those clouds, we did really luck out. And damn straight, Mr. Springsteen. When it comes to luck, you certainly should make your own.

A few months later, in early 2017, Chris Porterfield, heart and soul to the band Field Report, and otherwise known as a pretty stand-up human being, asked us about possibly working together on the album artwork for his new record. He sent us a recording to help us narrow down some composition choices. Upon hearing the first 15 seconds, we knew exactly which one it would be.

“I woke up blacked out, in a snowstorm,
with an airbag burn on my cheek,
check the wreckage walk away ok…”
~ Field Report, “Blind Spot”

Alas, LifeThings got in the way of the album and the collaboration seemingly evaporated. But the photograph we took of that busted up dashboard lived on as a beacon of sorts. A lucky totem, maybe. So much so that we dubbed the photo “Field Report” and featured it heavily throughout our entire 2017 art fest season. It donned the front of our booth and got splattered all over various blogs, emails, social posts, etc. Like an anthem, really, screaming out to the universe. Let this record happen. The world needs it. 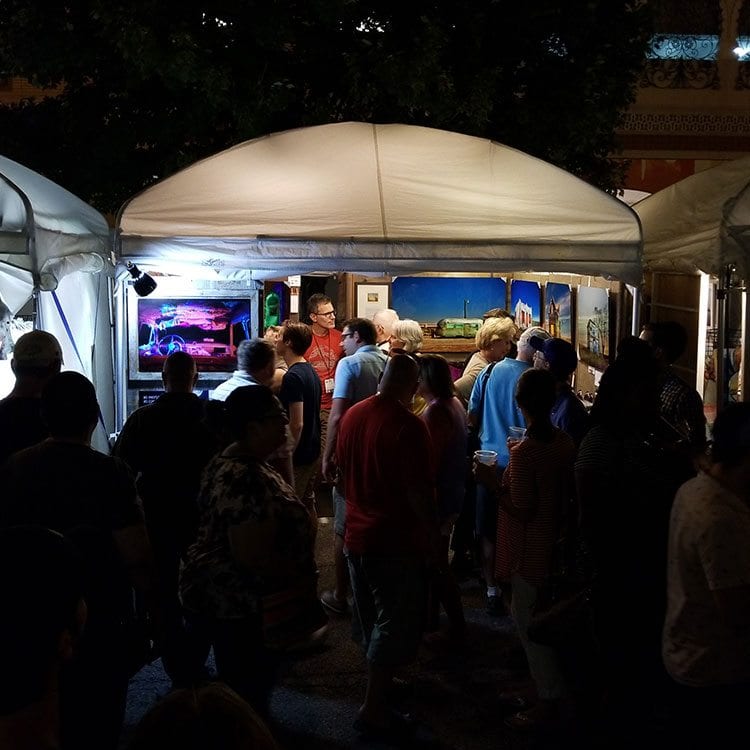 Then in October, we got another message from Chris Porterfield.

Verve Label Group picked up the record. Summertime Songs was a go.

And yeah, including our album art collaboration. 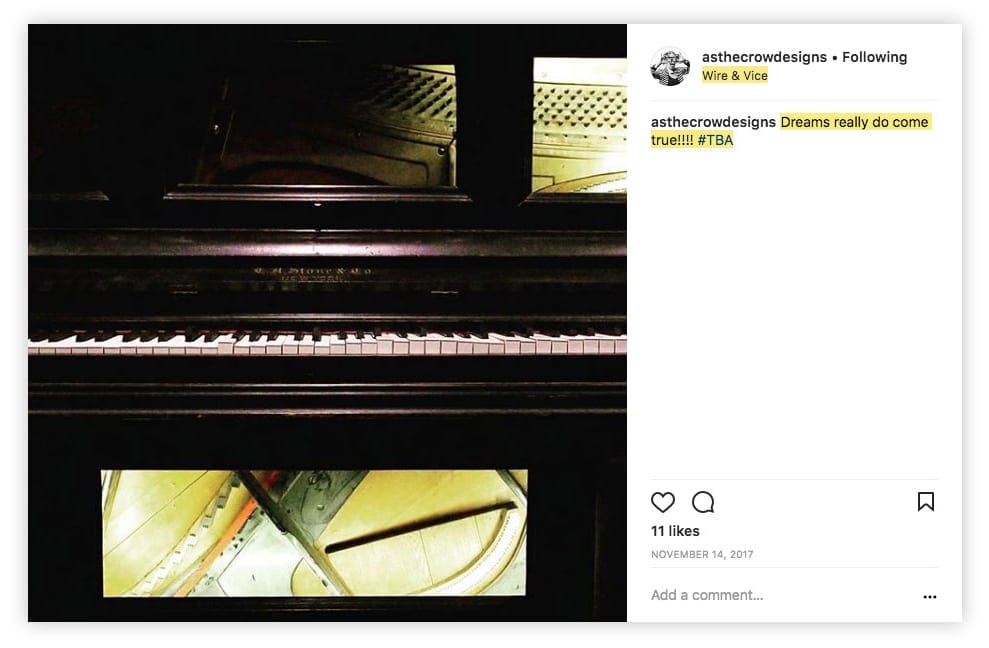 We met with Chris and he looked through our entire catalog of photos, but trusted his gut and picked the one we all knew was perfect.

The icon of the American car, the wanderlust of what lies ahead, the homesickness of what remains behind, and the wreckage you might have to take with you.

Soon thereafter we synced up with the whole band at Wire & Vice to do some “vibey” shots to complement the photograph. This, along with a shot of the guys outside on the street with the seriously intense hustle and bustle of Tosa as a backdrop. Ok, hey it’s not NYC, but it is #MKEhome.

Because one of 3,849,235 things that’s great about this record is all the hometown love and hard work which threads like arteries throughout its creation. 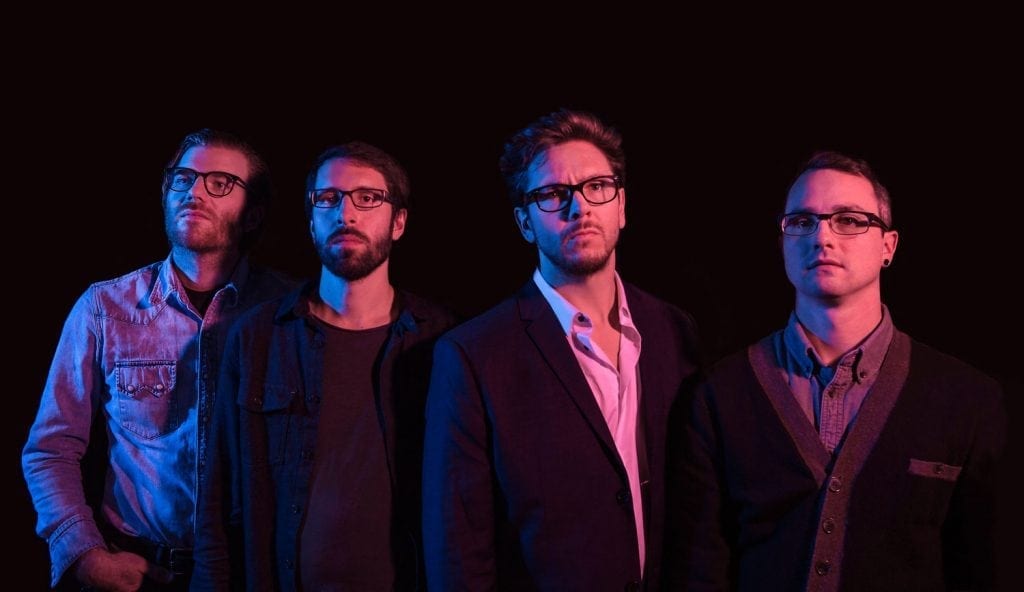 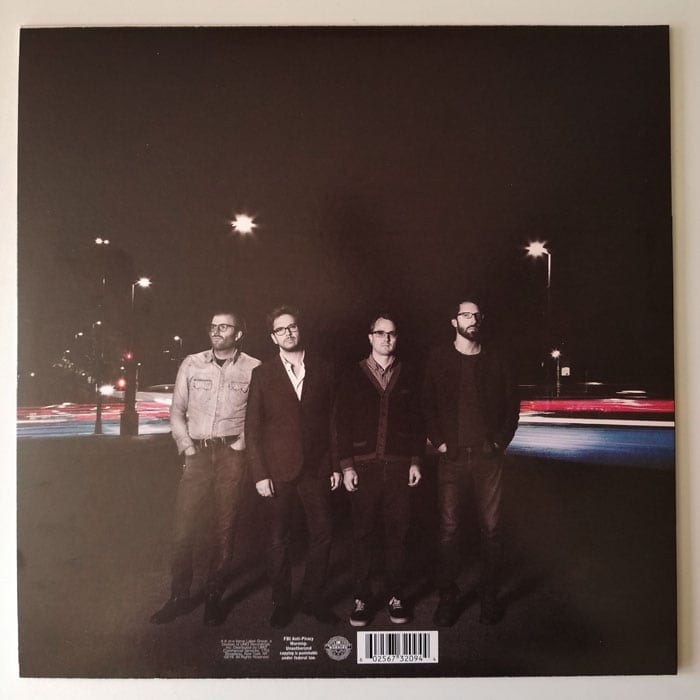 As everything unfolded . . . all the mini heart explosions we had . . . well, it’s all very difficult to put into words. And while our photograph is but one small drop in the ocean of drops that created Summertime Songs, it’s impossible not to feel a personal attachment. And thus, the past six months have been quite the emotional whirlwind: two photoshoots with the band at Daniel Holter’s illustrious Wire & Vice studio (where Summertime Songs was recorded and produced), seeing our photo translated into a cool band t-shirt, Field Report’s appearance on “CBS This Morning,” complete with the album art right there on national television, plus a steady stream of social posts featuring cool, glitchy, fuzzy renditions of our photo.

In our digital day and age, where album artwork is more of an afterthought than an entire campaign of visual experiences, well, it’s just icing on the already delicious cake we’ve been served. 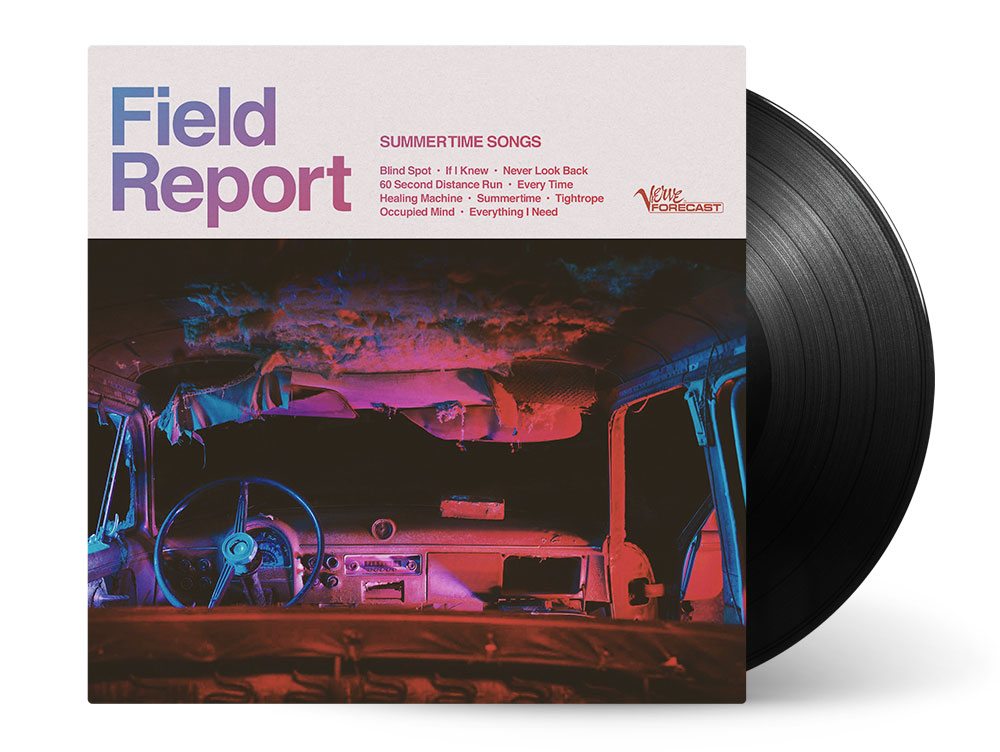 yes you can and SHOULD purchase this album!

Porterfield is right, CDs DO kinda rule! Mad props to the Verve design team: Josh Cheuse, Jake Lerman, et al for this stellar packaging and translating our work so well! 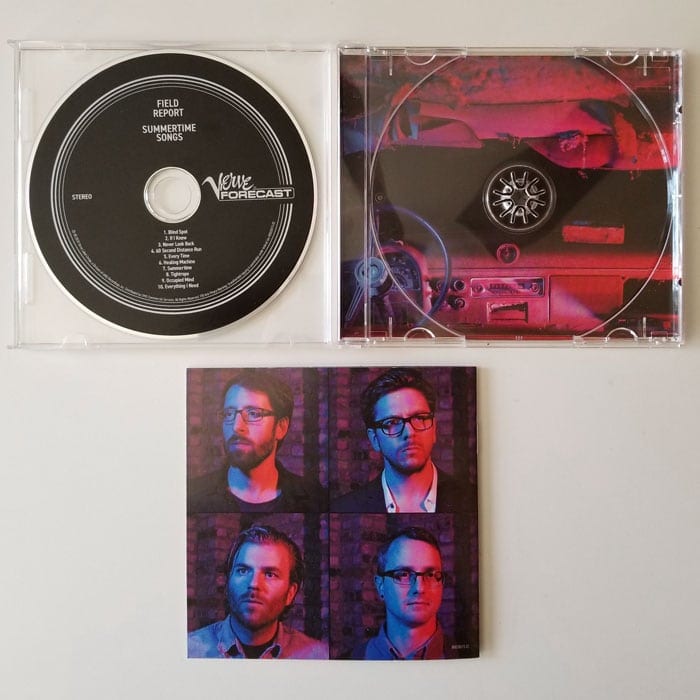 It goes without question that this is a giant day for Chris and for his awesome, kind, hilarious bandmates (who were totally cool with the photo session shenanigans) Barry Clark, Devin Drobka, Tom Wincek. Plus Shane Leonard, Daniel at Wire & Vice, and the rest of the Field Report crew, musicians, friends, family, pets, babies, plus all the fans—old and new—who have gobbled up all the Facebook/Instagram live sessions, Field Report’s Austin takeover at SXSW, each record single that’s been released so far, and the stellar documentary that our independent radio station 88Nine created over the past couple years, plus all the big and little things in between that everyone did to support this amazing album’s release into the wild.

To say it’s an honor or that we’re grateful to be just a little part of this project feels like a downplay. We know how much this particular album means to Chris. Which makes it mean just that much more to us too.

In our work, we try to capture the struggle between falling apart at the old seams and grasping the electric neon glow of youth that pushes us.

. . .but reach out for who you’ll become with the other.

You’ll hear a little of that in this album too.

If it isn’t obvious, we very much encourage you to purchase Field Report’s new album. It’s good. Real good. And we’re not just saying that like your mom would, although, yes, it’s frig-worthy. Also, check if they’re playing a town near you so you can experience the sonic landscape in person. It will not suck.

Watch the NEW video we created from our recent night photo adventure to the Dakotas. And then, to kill some MORE time, read a little more about the process and the trip.