One evening last week, I got a text photo from a friend. Scattered all over her floor were mugs, plates, drinking glasses, bowls, notebooks and other wares adorned with kitschy illustrations of Route 66. My fingers scrambled, I couldn’t write back fast enough. “Wahhhhh?!?!? Where?!!!” “Target!” she replied.

Ah yes, the new pop-up shops! To those who aren’t aware, this is the second run of short-lived boutiques at the ends of aisles in Target with limited-edition product which reflects a small American business. It’s kinda cool, Corp Target is giving exposure to the little guys. One of the four boutiques featured this fall is based on The Curiosity Shoppe, run by Derek Fagerstrom and Lauren Smith out in San Francisco. You can find all kinds of cute art books and jewelry and knickknacks in the SF store. After being approached by Target the couple decided their 2004 honeymoon would act as their inspiration for the Target pop-up store with the same moniker. While it would appear as though Derek and Lauren’s honeymoon revolved around traveling the Mother Road, they have yet to say as much.

As you quickly scan the designs you’ll find incredibly specific icons of Route 66: Catoosa’s Blue Whale, Arcadia’s Round Barn, Wilmington’s Gemini Giant, Atlanta’s hot-dog wielding Tall Paul, Amarillo’s Caddy Ranch, McLean’s Phillips Station, the Wigwams of Rialto and Holbrook, and even the leaning Britten tower in Groom. The funny thing is: there’s a numbered highway sign connecting all these magical places and it’s not 66. It’s not even 33 or 99…but Route 32. In fact, another Route 66 icon plastered on the oven mitts and notebooks is the Needles 66 Motel sign, only it says Motel 32. And if these weren’t proof enough, the journey that dots the pattern landscape begins and ends with the cities Chicago and Los Angeles, respectively. 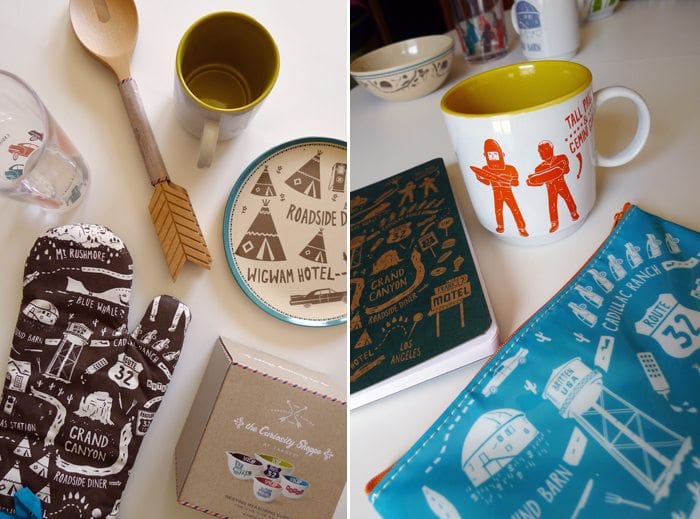 Immediately I had to know the story behind this strange situation: to be so literal in translation except for the most important detail had to have an explanation. Did they run into problems with licensing? Or perhaps they wanted to bring focus to the Curiosity Shoppe rather than Route 66. So I emailed the San Francisco store, totally rolling the dice at a response considering the couple is undoubtedly scrambling through fame just days after the shop dropped into Target stores nationwide. To my surprise I did indeed receive a response just a day later. They simply explained that there wasn’t a specific reason behind the 32, just that in conjured a road not yet traveled. To add to that, here’s another reference from an article on the SFGate website:

Again, no mention of Route 66. Mount Rushmore does appear in the products’ illustrations, and in fact, sort of acts as the sore thumb to any 66 fan who would glance at these items. This leads me to believe that this collaboration with Target was simply that, a collaboration. The product line merely instills the spirit of the Curiosity Shoppe with its kitschy knickknacks as well as the couple’s road trip to Mount Rushmore, but the Target designers themselves ran with the Route 66 idea. Lauren and Derek’s email referred me to Target’s PR email address if I had any further questions, so I’m curious–no pun intended–if the corp will shed more light on the subject.

I’m going to be straight-up honest. Chris and I were both a little deflated about the lack of 66 reference and our slight bitterness is two-fold. When I received that text photo of the truly adorable illustrations smattered all over equally adorable house and kitchenwares, my gut reaction was a smidge of jealousy. Being a graphic designer myself–and obviously a huge 66 fan–I’ve spent a whole heck of a lot of time thinking about a strikingly similar concept. Chris and I have all to often discussed designing a line of Route 66 souvies specific to each roadside attraction: design that would both highlight and unify the Route’s odd but lovable cast of characters. The only thing holding us back was figuring out a way to go about it without stepping on the toes of any of the attractions that already sell their own themed tchotckes. We wanted to work directly with each owner or caretaker. For example, we recently teamed up with the owner of the Midpoint Cafe in Adrian, TX, on updated postcards with a potential for magnets down the road. But take the Blue Whale for instance, while there is no online-presence and it’s open only on Saturdays or so, the classic Route 66 stop does indeed have a gift shop which sells Blue Whale merch. When I spotted the mugs sitting on a Target shelf with the classic icon perfectly illustrated and emblazoned around the sides–not a representation, but a literal translation–I thought to myself: well, they had to have gotten permission right? At least a heads up?

Secondly, I gotta say that at a time when Route 66 is really on the cusp of mainstream exposure amongst younger generations, this whole Route 32 thing is sort of a bummer! It’s not as if the designers of this line [which, side note, is Made in China] imagined up a bunch of attractions or even loosely based them on various sites all over the U.S. Aside from Mount Rushmore, they’re all Route 66 places. And I get a little sad when I think about patrons buying the items because they’re cute and whimsical yet have no idea that these places actually exist, especially if you consider the fact that the product line is obviously marketed toward a young generation, a generation who is quite ironically obsessed with throwback nostalgia (think Instagram, Polaroid, Lomography). Maybe I don’t give young people enough credit though. Maybe they’re all googling “Britten USA tower” as I type.

Again, the fact that Lauren and Derek simply wanted to conjure the idea of a nostalgic road trip is awesome. I mean we get it! We’re right there with them. Secondly, I really do love the design and concept despite all my moaning! It’s beautiful, adorable and a truly perfect representation of Americana. And finally, I definitely give Target credit for showcasing these small business and look forward to the unveiling of more pop-up shops just like this. I guess I just see it as a missed opportunity. Sure a missed opportunity for someone like Chris and myself who would’ve LOVED to do a project like this. But much more importantly a missed opportunity to bring a refreshed Route 66 into the mainstream world of a younger generation.

With that said, you better believe we threw down and bought some of this stuff. I mean how often do you see all the things you adore about Route 66 plastered all over plates and bowls when you’re out buying cat litter and milk? I now get to drink my coffee from a Blue Whale mug in the morning! It’ll have to suffice until Chris and I can make our own Blue Whale mug…with Blue’s blessing of course. 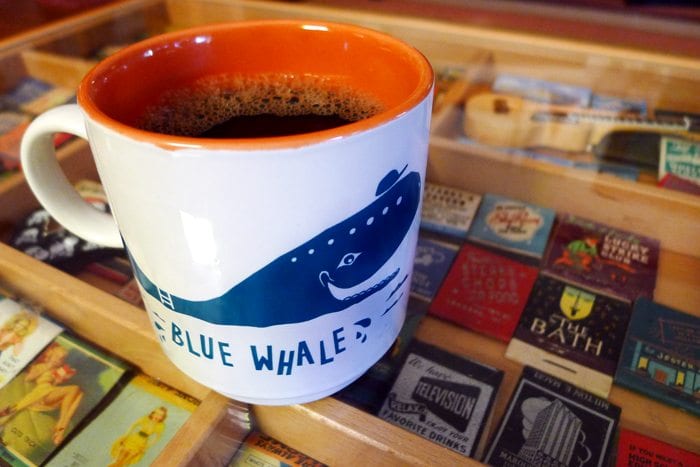