I reassured the gentleman with his excitable dog as my heart pounded so hard I figured they both heard it even above the interstate traffic.

But let’s back up about year. Chris and I were selling our work at the John Michael Kohler Art Center’s summer art festival. We traded off manning our little white tent in order to catch Trapper Schoepp and his band play to a crowd gathered in the courtyard. Whether there’s five of you or five thousand, you’re guaranteed a stellar Trap show every time. Sometimes belting it all out ‘til his voice has left the building (but he’s still got a crowd walk and an encore to do), Trapper throws himself into his gigs. And everything else for that matter. Big fat European tour? Done. Followed by a 50-date summer tour back in the States? Hell yes. Record an album in like 10 days? Damn straight. But I digress. 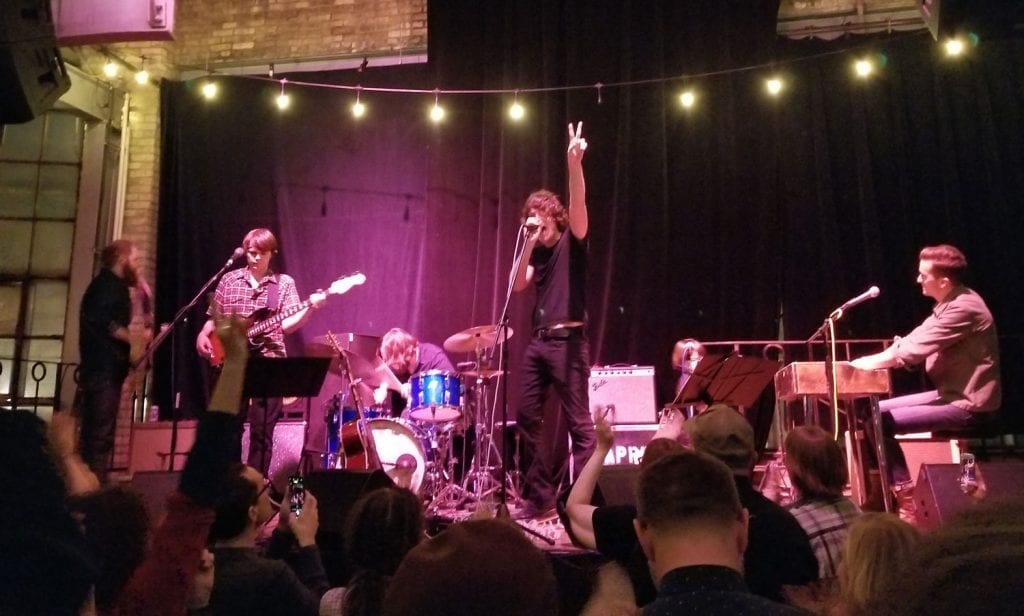 After the show, I stopped at his merch table to grab a couple records and slipped him our business card with a little background explanation into what we do. We exchanged various pleasantries and went about our lives.

Seven-to-eight months later, scrolling Instagram, Chris stumbled upon the fact that Trapper and Friends just wrapped up recording with Daniel Holter at his studio, Wire & Vice, along with none other than Pat Sansone producing. Chris is a gigantic Wilco fanatic, complete with “that one-time” story when he drove the Band-minus-Jeff-Tweedy to Milwaukee bars a million lifetimes ago. (Chris used to rock a seafoam-colored Chevy Aveo, which is what makes the imagery of a band stuffed into the subcompact hatchback particularly amusing to me.) So Chris messages Trapper to casually drop that we tackled the album photography for Field Report’s Summertime Songs, so if he’s on the lookout for an album artist, we’d be happy to oblige.

Next thing we know, we’re buying a busted up mid-century tube television from a lady in Tosa as the pièce de résistance for Trapper’s upcoming album Primetime Illusion. 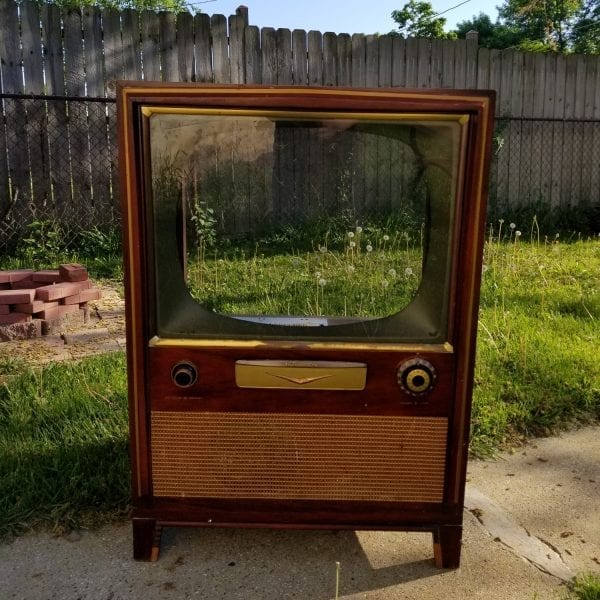 We succumb to the comforting glow of the ruin around us. Trapper explained,“The character-driven songs on Primetime Illusion feel uniquely American to me.” He dabbles a bit in the heavy darkness which seems to perpetually hang over postmodern American culture on this album, but he’s got a way of squeezing the light out too…tongue-in-cheek lyrics, catchy hooks, a rhythm you can clap to…I think it’s gonna be ok. So this was the thematic vision that we wanted to convey in some surrealistic Storm Thorgerson type way, with our own spin of course.

Enter: The classic American living room in the middle of nowhere.

Trapper told us to run with the concept. It would take some plotting and searching. Nothing we weren’t used to, but “staged” is a lot different than the happenstance subject-matter we typically photograph. Trapper would help provide props so the “room” would feel legitimately him. We were desperate to find the perfect open field as our set, not too remote that it’d be a beast to drive, but far away enough from the city to avoid excessive light pollution. Chris and I spent a gorgeous, warm, sunny Memorial Weekend in a ball of nerves scouring fields off all the Southeastern Wisconsin interstates. At the eleventh hour, we finally stumbled at the perfect spot down near the Racine-Kenosha border: the quintessential Midwestern plot of land, soulless, barren and flat-ish, ripe for some sort of corporate park overlords (being built there as I type this). 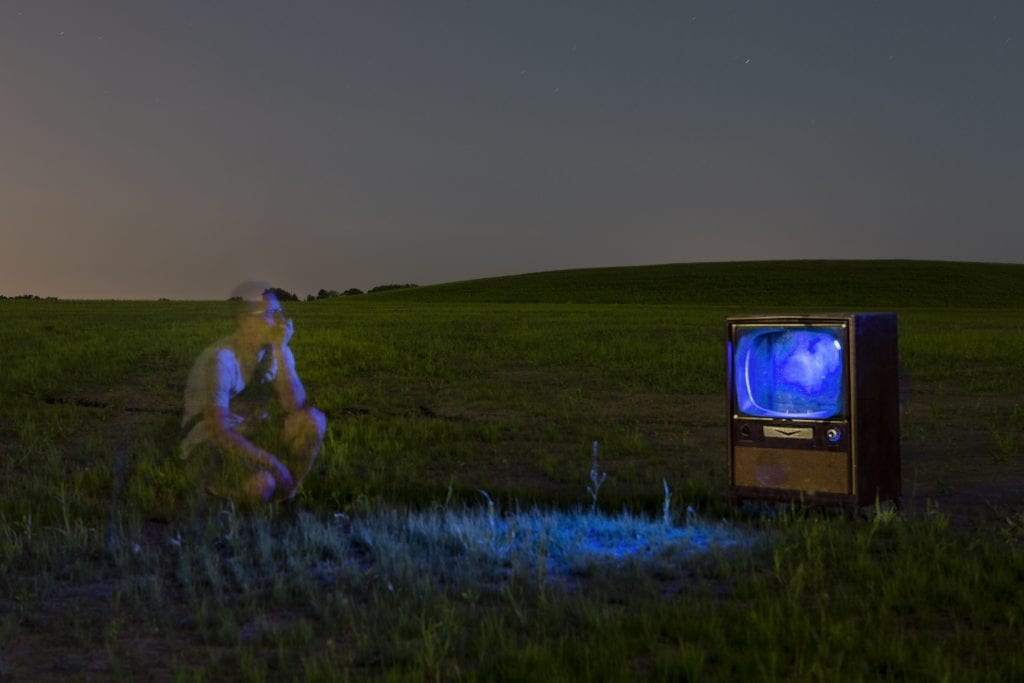 Step 2? Nail down a night that fit within these parameters:

So! The very next night we were back in the barren field with Trapper and his friend Josh lugging all sorts of heavy giant things from our vehicles to the location about 50 yards away. Seriously a television, armchair, amp, crate of records, floor lamp, area rug, plus our gear…a handcart would’ve been a solid idea.

Oh and one more thing. The TV was definitely not the pièce de résistance. Nope, that honor goes to Ollie, Trapper’s Boston Terrier Bestie and maybe the most rock ‘n roll dog since Rick Springfield’s dog Ronnie. Exactly the kind of throwback Americana vibe that we needed.

The thing about Ollie, though? You can’t exactly roll up on a location at 10 pm without being noticed. And this night was no exception. Ollie was overzealously enthusiastic about the evening’s activities. And so was a dog about a quarter mile south of us, whose job it was to alert the entire block of imminent danger. Sure enough, off yonder we noticed some human activity, a garage door open, and someone dart an intense flashlight nervously in our direction, so Josh and I volunteered to jog over quick and put the neighbors at ease.

But just as we arrived at the house’s driveway, the garage door closed. The dog was still circling a bit out front, so Josh and I decided not to venture any closer. We reluctantly returned to our nightscape living room set. Of course, once we got there, the darting flashlight returned. And more ruckus from the guard dog. I told the guys I’d try again; this time I hauled ass over there so I’d catch the neighbor. As I ran up to the house, I saw an older gentleman standing near the garage, gazing out in the distance with obvious trepidation. I slowed down and waved, and yet we managed to spook one another anyway.

In between gasps for air, I explained the situation. As the words tumbled out of my mouth, I realized how ridiculous it sounded: shooting an album cover in the middle of a Tuesday night on some “for lease” swatch of real estate off the interstate. But thank God, he was all good with it. Begrudgingly, he admitted that since the nearby gas station and fast food joints went up, nefarious activities were more frequent; gotta keep an eye out on the neighborhood. In other words, indeed, he was about to call the cops. I reaffirmed our activities were innocent and took a mental note of the irony of this conversation and the album’s theme. Perhaps a wry wink from the rock n’ roll gods. The neighbor genuinely sounded excited about our adventure up on the hill, so I told him to be on the lookout for Trapper Schoepp. (Highly likely coming to a gig near you!) I thanked him, mentioned we’d try to keep it down.

I ran back to the shoot and helped the guys with the final touches. “Some photographers might pack up and move down the road but you’re totally zen about it all.” Thanks Trap, it’s taken some practice. (This is the part where Chris reminds me of the time ten years ago when, at a shoot, I crouched down to hide in my seat as an anxious neighbor approached our car.) 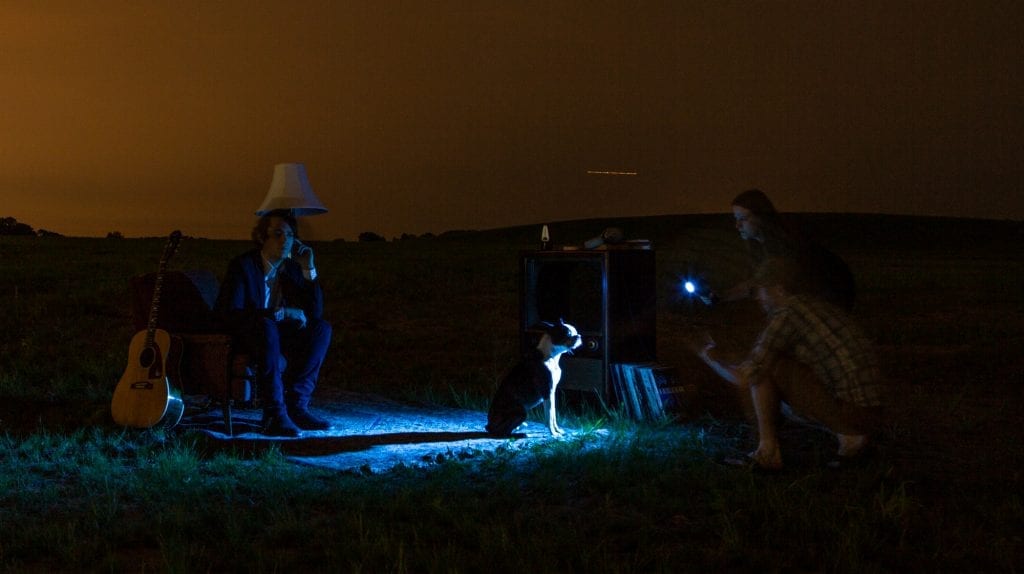 Neighbor-Drama aside, the toughest part about the shoot was keeping Ollie still enough for our long exposure vibe. But thanks to Josh’s dog whisperer skills, we made it work! The rest of the composition went as follows: while Chris kept the camera shutter open, and as Trapper lounged cool-noir in the armchair, I started stage left to shine white light on him, then crouched behind the TV with my blue flashlight, then shimmied over to the floor lamp (plugged into a battery pack) to snap it on and off in a half-second so it wouldn’t blow out in the long exposure, and finally dashed stage right to pop the guitar with a hint of white light. Who needs an entire expensive photo studio, am I right?

We danced this dance a few dozen times and finally wrapped up around 1 am. Just as I’d imagined in my head: a diorama of sorts, something slightly off and yet familiar, stark but kinda comforting. 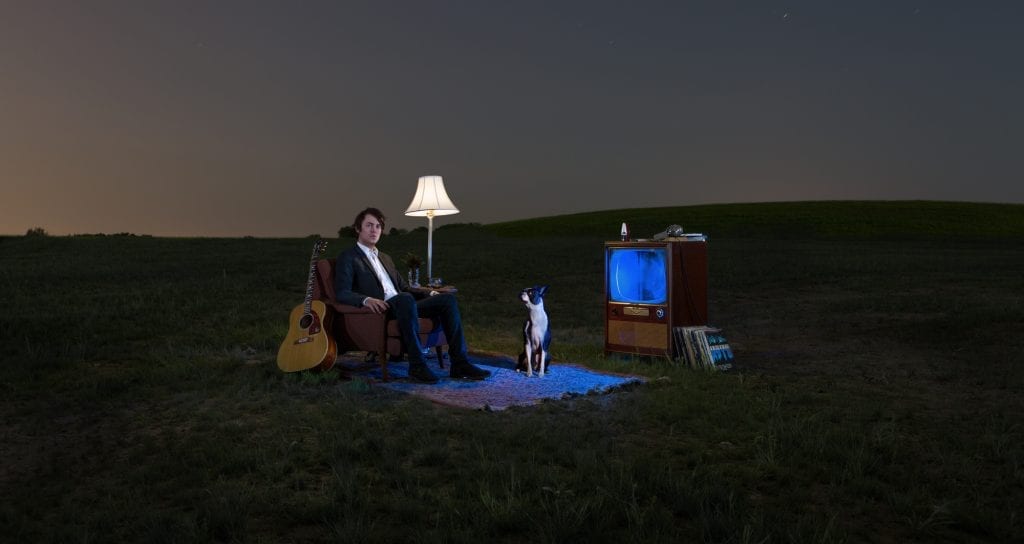 Back home, I also had the honor of the graphic design and art production for both the LP and CD art. Trapper would have drafts of all his new album artwork two days later. After just a few revisions, all parties agreed: thumbs up, print it.

And we’re here: the week of the January 25th release of Primetime Illusion on Xtra Mile Recordings. A handful of singles are already making the rounds: “Freight Train,” originally written by Sister Double Happiness in the late ‘80s, with its poignant perspective of a life marred by HIV/AIDS, and “On Wisconsin,” with lyrics originally penned by Bob Dylan, but tuneless until Trapper gave it some love and a chorus. Trapper’s latest release, “What You Do to Her,”—an original featuring Nicole Atkins and a video illustrated/animated by Casey Hoaglund—he adds another ripple to the wake of the #MeToo #TimesUp era. Quite the dichotomy, with seething lyrics hidden under a cheerful hook. What if you find yourself at a Trapper Schoepp show and the band strikes up the first few hand-clappable measures of this catchy tune? Do you start to dance? Do you smile and do do do you sing along? It’s the awkward spot we’re all in, especially our menfolk. How long before we stop ignorantly (or inadvertently) tapping to the beat and really listen up?

We’ve found ourselves in another season, waking up from our own primetime illusions. To be honest, we’ve had a rough go at it. But art should always be a safe space to explore those messy emotions. And if you have a receptive crowd willing to sit down with you and listen and maybe even contribute, all the better.

From Trapper: “I like working with other artists that have a strong voice but will be game for spontaneity. That’s Katie and Chris, and I hope we can find some more of that magic down the road.”

Trapper, with busting gratitude, thank you for dusting off a spot just for us. Godspeed on this wild chapter of yours.

Now go out a grab yourself a copy of Primetime Illusion wherever and however you purchase your music. Here’s a good place › 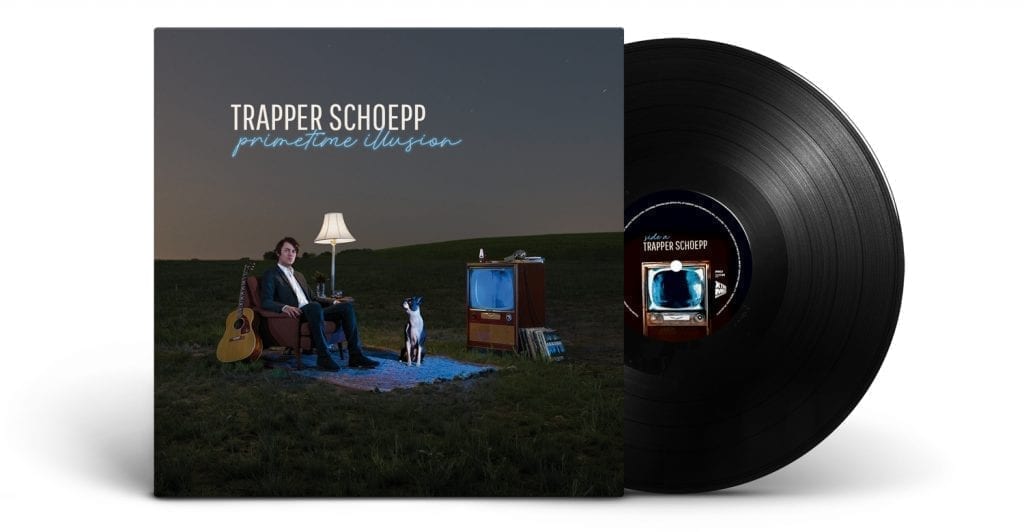