It was a full moon evening and like many late nights before, it meant traveling to an unfamiliar location away from home. This evening was no different. My location goal was a hulking industrial ruin in Manitowoc, Wisconsin.

On my way to this location, I passed by an amazing old drive-in called The Penquin with equally stunning neon-loaded signage. (Keep in mind I’m not spelling that wrong. Despite the black and white penguin featured on the signage, the drive-in is called the Penquin with a Q. If I knew the entire reason why I would love to share.) 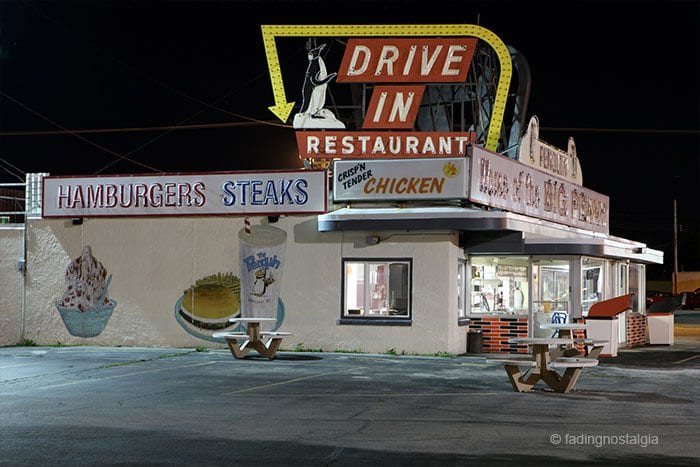 This incredible building would not be out of place on Route 66 or the Lincoln Highway. But it certainly felt out of place amidst the modern big box and chain stores. It was as if the town of Manitowoc held this gem near and dear–protected it while its equally historic, former surrounding neighbors fell to progress. The Penquin held on, and judging by the recent response to this image posted online, it had been a local favorite for many years!

After I had spent quite a bit of time shooting at my intended, nearby location, it was time to call it a night and head back to Milwaukee. While it was almost 2:30am, I had made sure to reserve what little energy I had left to capture the once bustling social spot, with its “Big Penny” Burgers and roller skating carhops. To my surprise, the internal lights were on! Plus, in photographic terms, it was surrounded by so much street and light pollution light that no moon was needed to photograph my image. While I had wished for the neon to be blazing this evening, it wasn’t crucial to capture the soul of the place. On this night, I was thankful that–despite its frequent threat of demolition–someone stepped up to save the old Penquin and it continued to stand strong.

Turns out my timing was great. Sadly, in the early morning hours on November 19th, 2012, the Penquin was clearly not going to be selling any more Big Penny burgers! The entire complex, stripped of signage and interior fixtures, was demolished. Officially destroyed for any future generations to visit. All good things end eventually. Apparently, from 2006 onward, the place had switched hands several times. It’s tough to say why it failed…Whether it was bad management, bad luck, or they just weren’t able to capitalize on the inherent cool-factor that made the Penquin more beloved than the Hardees which replaced it. Now all we have to go on is the culmination of rumors and the very scant stories about this former landmark at 3900 Calumet Avenue.

All was not lost, however, as the iconic signs were acquired by Dr. Ronald Lese who owns a collection. I’m told it’s on private property in the Francis Creek area. Maybe with a wink or two it might be viewable with permission?

Do you have stories to share? Did you work here? Do you know if the signage is viewable today? I find it hard to believe that this historical building has so little history available and even less stories to share. I’d love to know more, so please share below!

For a little more info about the Penquin, check out The Wisconsin Project’s post. This “postcard” photo taken by J. Shimon & J. Lindemann. 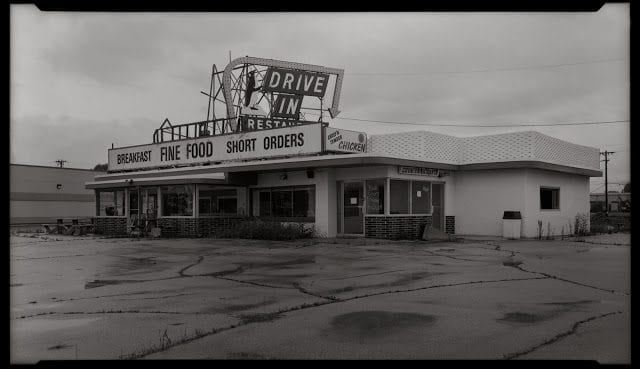 Some of the best neon signage!