While the exploration of uncharted territory is a thirst that cannot be quenched, a reverse version–a much more peaceful version–of traditional world exploration is just as addicting. Uncovering settlements-lost is a concept equally as enduring and isn’t reserved for just archeologists. They may not brandish little brushes and picks, but urban explorers have taken archeology out of the deserts of Egypt and into our backyards. While most photographers and adventurers do try explore in peace, breaking the law of trespassing is usually a necessity. This form of guerrilla archeology isn’t a hobby to be taken lightly, in other words. I have run into my fair share of characters throughout my exploration of both rural and urban locations, the following being one of the more memorable. This particular location is one of my favorites, visited half a dozen times. Upon the first investigation, a fellow photographer and I scouted the house in the daylight. Many of you Wisconsinites may have passed this spot dozens of times on your way to and from Chicago without even knowing it. Somewhere in Kenosha County, an old white house rots amongst overgrown vegetation…vegetation that was once a successful farm I imagine. On this particular occasion, however, everything we saw was covered in heaps of snow as it was a frigid mid-January day. We pulled up to the house, even so brazen as to open the gate and park in the former driveway. We began scouting the house for spots to photograph at night, a crucial step in the night photography process if you are fortunate enough to be able to.

Not so Pleasant Prairie

Upon entrance, we carefully traversed a deteriorated flight of stairs to what was once a second floor, most of which lay on the first floor below. This is the time when most photographers take hundreds of pictures, but we soaked in the surrounding traces of former life: a family just like anyone else. We scrounged through old papers to find a date, any history of the house. But in this state it was a glorified nest for birds and field mice. As we wandered through the rest of the property, we counted seven odd buildings including a traditional barn. Actual bailed hay still remained untouched, which made me even more curious as to the circumstances the caused the family to leave. In addition to the old buildings, we discovered numerous vehicles and pieces of farm equipment buried in snow, this included two AMC cars, manufactured in Kenosha of course. The cars clinched our excitement to return in the spring, once the snow melted and the vegetation returned. 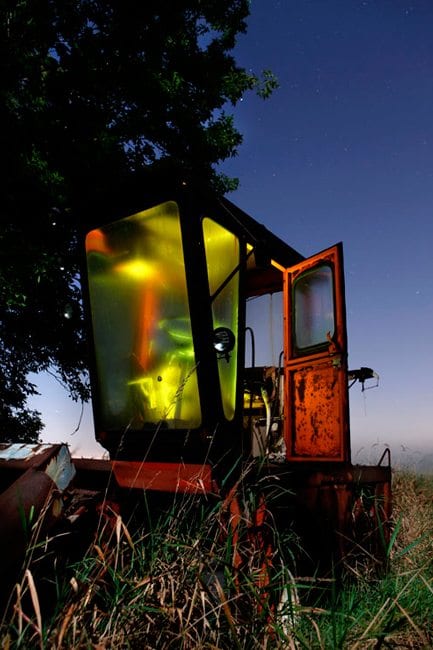 Over the next several visits, I took night shots of the house itself as well as the surrounding cars now drowning in tall grass, weeds and brush. One dark night, when we arrived at what would be my final excursion to the house, for whatever reason–perhaps pressing my luck so many times before–we hesitated to park in the driveway, so instead parked on the rural road in front of the house, off the property. Considering the events that were about to unfold, a very good call. Rather than tour the grounds, I decided to set up shop on the road outside and do another shot of the house.

Literally ten minutes after our arrival a huge Ford truck came barreling down the road. A gruff man hung out of the window and barked questions regarding our presence. I calmly explained that we were only taking pictures and meant no harm. He told us to leave in slurred words, but I simply moved my camera and tripod down the road away from his truck. He proceeded to position his truck and brights directly at me. I walked closer to explain that ours is a harmless hobby. We are not on the property and have rights to take the shot. He mumbled on to say he had rights too as he began stumbling out of his truck. I could smell alcohol from my distance ten feet away. Once he was out of the vehicle, he stepped aside to show the assault rifle lying on his seat. My friend and I widely glanced at each other, clearly this was not worth the trouble. We rushed to the van and peeled off; the truck did the same, following us close of course. He eventually turned onto another remote road and the drama was over as quickly as it began. Just another day at the office.

We investigated further on the history behind this house and as it turns out, Ford Truck is indeed the property owner, and delinquent not just on the upkeep, but on the property taxes as well. At the end of the day, yes, perhaps we did bend the rules of legality–it was indeed his property that we had so casually trespassed, but it was never with a heavy hand: no vandalism, no violence. And at least someone appreciates that place. At least someone wants to give it a last gasp of air before it’s eventual complete demise. 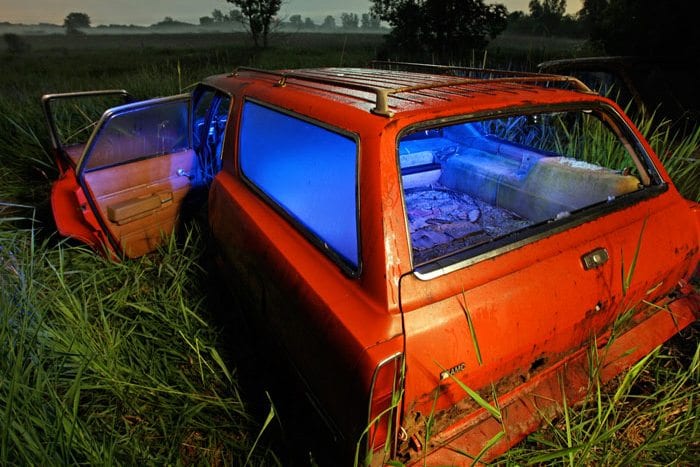