Night in the Life of a Night Photographer

Totally bummed out, we reluctantly hacked our way back through the brush, snuck through the fence into the garish street light, and climbed back into the van. We both agreed…on the way back home, we’d take the more leisurely Lake Shore Drive north to the expressway so we wouldn’t have to deal with the Loop traffic again.

It all started with a conversation with a fellow historian and adventurer, Chicago photographer Eric Holubow, over Instagram about a super rare location, barely touched by apocolyptic human hands. After several weeks of back-and-forth and a hope he could join us to the “secret” Chicago spot, he just wasn’t able to make it.

Our sojourn to the southside started out merry enough, complete with XRT blasting from Moon Patrol’s speakers. The mouthwatering location—never lit by night—beckoned our call. Even the extra lengthy 2+ hour drive couldn’t get us down. The Thanksgiving Weekend Saturday proved to be a weird, warmish break sandwiched between the onslaught of freak cold weather and the impending Sunday snowstorm.

We finally pulled up to the building and circled a bit, all covert-like since we were definitely snug deep into a bustling Chicago neighborhood. This was NOT like the Dakatoa ghost town vibe we usually stroll into.

We parked, snuck through the fence opening, and pushed through some overgrowth to find what should’ve been the fairly obvious “P.O.E.” instructions we were given: a second-ish floor window that’d be easy to climb into. 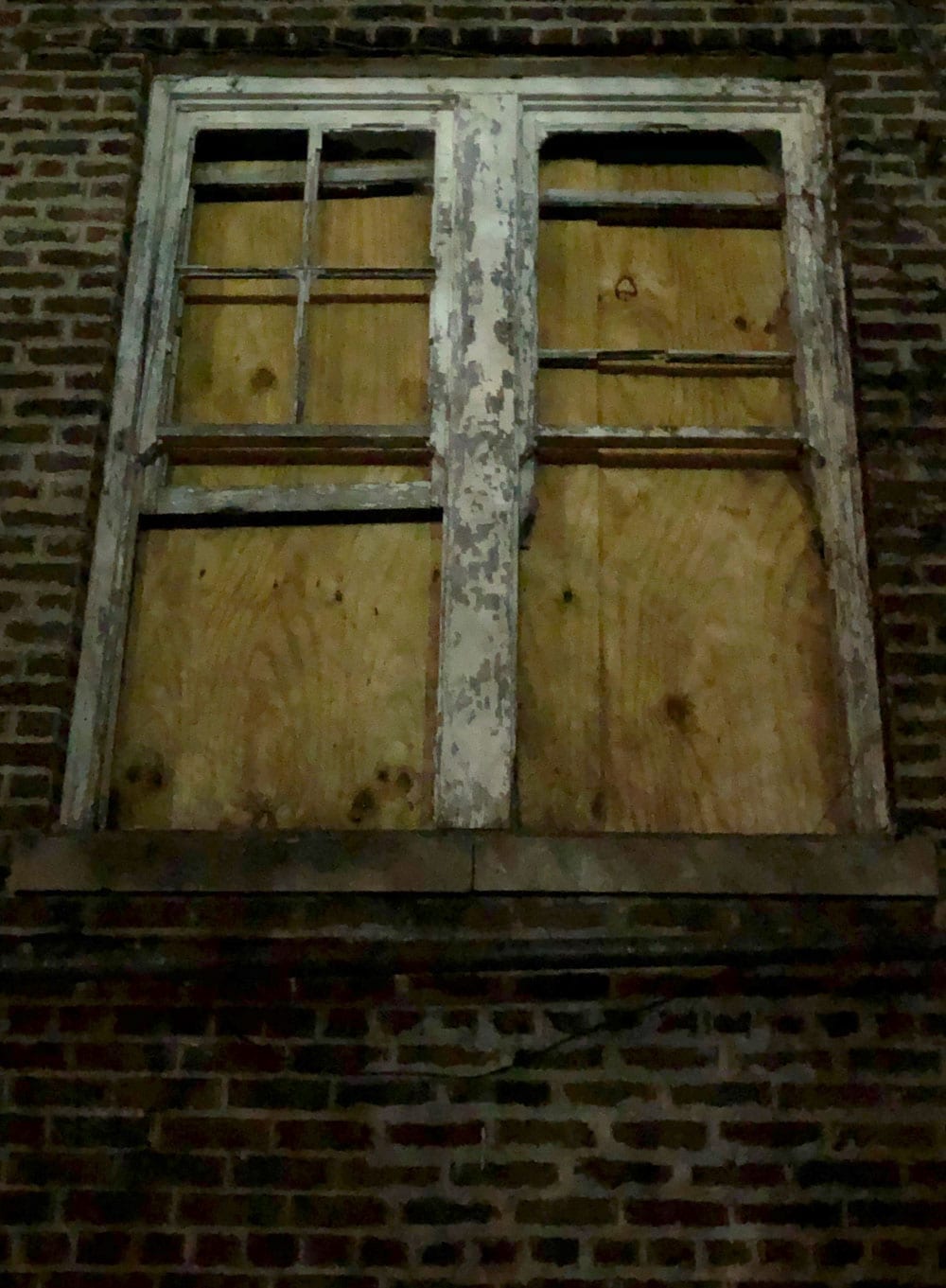 We spotted something the fit the description but boarded up, so we continued to circle the entire expanse of the building to find the entry: from the locked basement doors and side entries, first-floor windows to the front door, as sometimes the most obvious of entries are the open ones. And again, overgrowth…most of the backlot was full of brambly bushes that were tricky to navigate through. And yet we pressed on through the branches, circling the place over and over to try to find some way in.

Sadly, after nearly a half-hour, we finally called ‘er DOA. The second-floor window—boarded on the inside—was indeed the original way in. We noticed a fresh set of iron bars had been placed on the window next to it, so someone must’ve decided, “enough with these damn urbexers traipsing through our building!”

Maybe it means someone’s willing to save it? Silver lining.

In our art shows, we often get asked if we ever get permission to enter. And, no, 99% of the time we don’t. But, ethically, we won’t break and enter either. Standards!

So reluctantly we threw our proverbial tails between our legs and trudged our way back to the van. Hey, at least it was a decent mini-road trip to the great city of Chicago! We messaged our contact to let him know that the place was most certainly buttoned up now.

As we cruised down LSD with the big lights big city to our west and the rising full moon over Lake Michigan to our east, hunger called! We needed something quick and decided a trip to White Castle was definitely in order. We’re vegetarians but knew they offer the Impossible Burgers now, so we hit one up right down the street from the infamous and historical Heart O’ Chicago Motel. Wouldn’t you know it three other patrons also ordered Impossible Burgers while we were there!

While patiently waiting for our veggie burgers we got a message from our contact asking us if we’d ever been to such-and-such theatre in southern Wisconsin. Nope, sure haven’t! On our way home? Let’s do it! He sent us some seemingly easy instructional entry hints.

Long outside the city, lonely I-94 was full of weary holiday travelers getting the jump on traffic and the aforementioned snowstorm. We pulled off and made our way to the older section of a dying, but hopeful downtown area in search of this old theatre. We tried our best to match up our instructions to the external architecture of the giant theatre building. Apparently, we were either really off our game or just unlucky because, once again, it seemed like the entire place was locked up solid. This time we not only had bramble bushes to contend with, but sheer cliff drops we attempted to climb in order to find side doors to sneak through.

The more we tried the more our shoes gathered up mud and our coats accumulated burrs. We climbed and circled the expanse of the building and its surrounding neighbors half a dozen times, using additional clues from our contact. No dice…not another bust!!

So, yet again, Chris and I hung our heads in disappointment as we made our way back to the dark lot where our van sat. As we pulled out and around the corner to the main drag to head for home, I had this lightbulb moment as the insta-messages from Eric rolled back through my brain. I asked Chris, “Can we head back to the parking lot a second, I want to check something.” I hopped out, scurried in through the brush again.

There it was. As obvious as day.

The only thing is that the “entry” required quite a bit of the Fat Man’s Squeeze, completely down on our bellies, slithering face-first in the mud no less. But after the last six hours of driving and failures, we weren’t turning back now! I pushed through easy enough, but had to help pull Chris in a bit. We brushed off.

With our flashlight and phone lights on full power, we found a staircase, climbed up, and there it was, the massive theatre! We walked right onto the busted-up stage, like musicians, actors, performers, and artists before us. It was grand! Man, what a sight!! 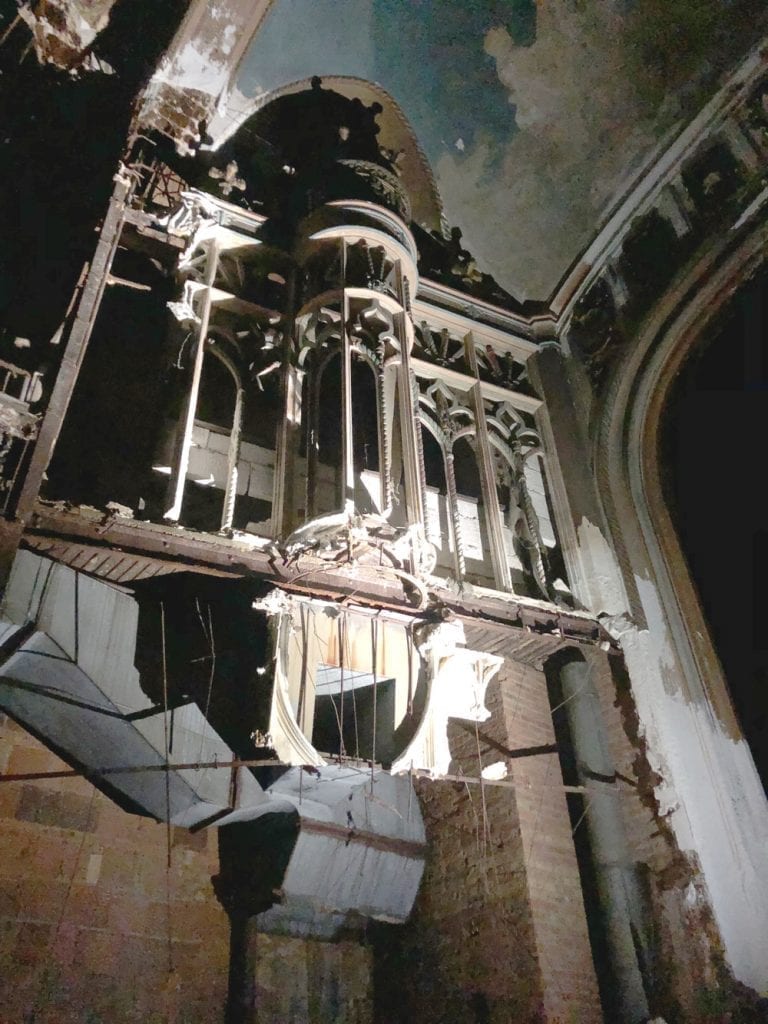 Without our flashlights though, it was absolutely pitch black in there. Scary pitch black. And the air was just swimming with slithery clouds of moldy dust. Paranoia started to creep in as I felt particles building in my lungs so I pulled up the neck of my shirt to breathe into. Total amateur hour.

But we were completely energized with palpitating energy to get at this composition! We set up shop in the center of the theatre, our focus on the ornate stage and surrounding architectural details just hanging on for dear life. It wasn’t until we looked at our photos later that we saw the details of the heavenly fresco above the stage. 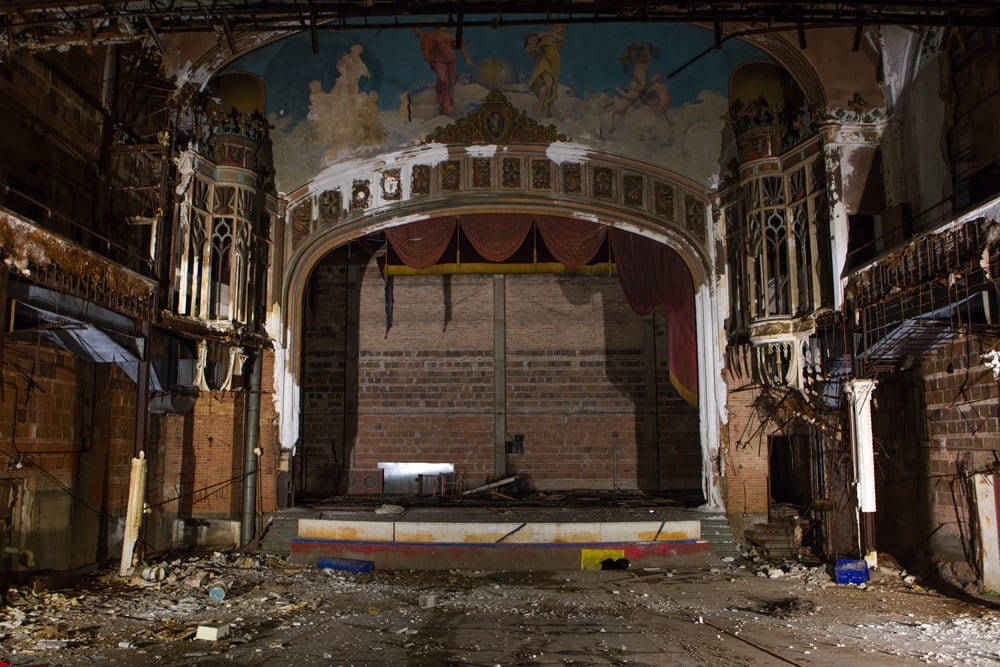 So again, the theatre was truly void of any and all light, right? The ideal black canvas to create some bitchin’ artwork! Yet, at the same time, freakishly NOT perfect when it came to walking around to get from one corner to the other without tripping on the buckets of garbage (and literal buckets) that littered every square inch of the place. If I used a flashlight, I’d get picked up by the camera. So instead, I crouched real low and used the soft glow of my cell phone screen, pointed down at the ground, away from the camera, to traverse, one-foot at-a-time, without stumbling too much. To pull off what would be our final comp, I painted purple light up the left and right sides of the architecture, then switched the flash over to lime green, climbed up and onto the stage to light up the brick opening, determined not to fall into the giant hole in the center of the floor. 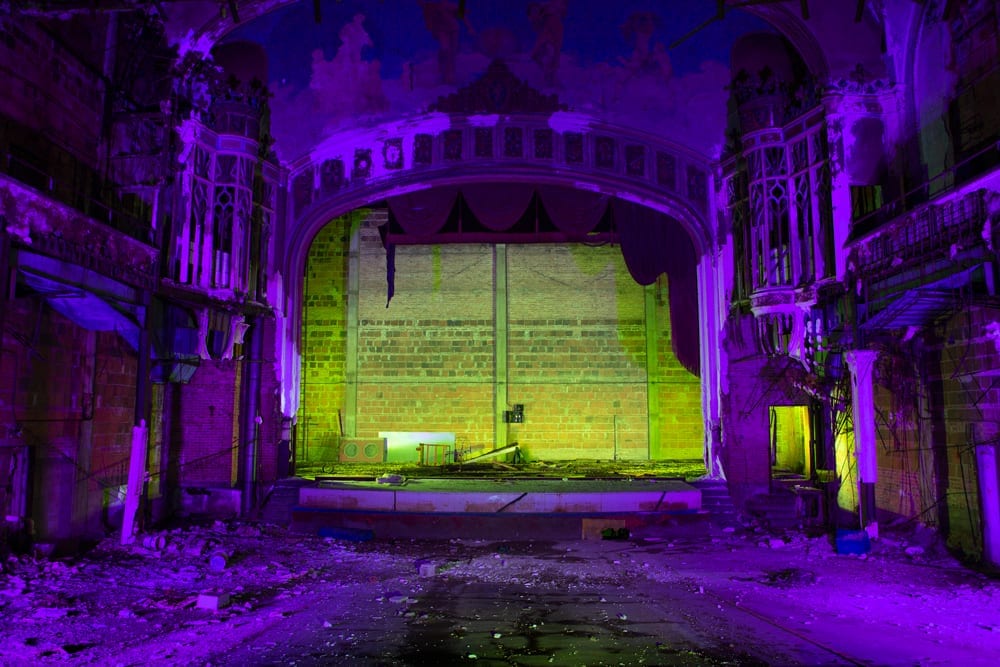 I was standing all alone somewhere in the vicinity of former the 30-35th row. With nothing but trash to keep me company, suddenly a giant piece of something dropped from the ceiling off to my left ten rows up. And when the sky wasn’t falling, the scurry and scratching of some small animals behind me kept my attention. I also listened to Katie scuffle across each corner, with an occasional trip and swear word. She’d return to see her handiwork, I’d give her some more suggestions, and she’d go at it again.

We finally landed on a good take. But there was still quite a bit to explore. I figured, we’re in this deep, we should at least walk around the ruins and to the upper balcony. Despite running on fumes and getting colder and damper, we explored the lobby packed with oddities, junk, and antiques.

We found the staircase, climbed up to the balcony, and found rows of old seats in one clump to the right. From that perspective, we really took in the enormity of the place. 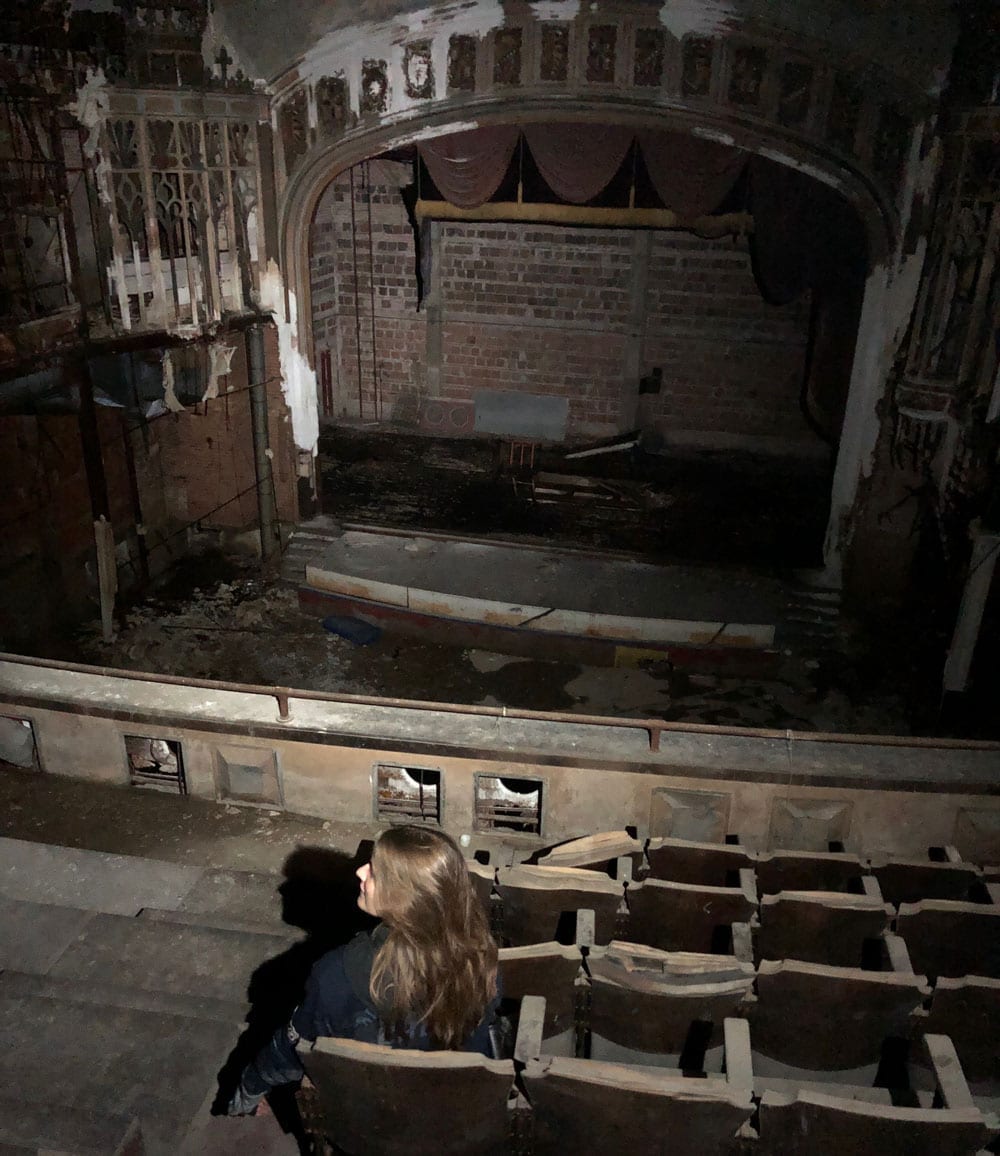 I plopped down the tripod and we went for it! But every time Katie walked up through the aisles of seats to light up the upper balcony, either I was met with a heavy dose of vertigo…or the entire structure was moving. After saying something to Katie, and she told me she was about to ask the same. So this giant balcony that used to hold like hundreds of seats really is moving?

Another frightening thing, because of the tight composition, the camera and I were shoved right up against what was left of the balcony railing. Nothing else separated me from certain oblivion. And it felt like it wouldn’t take much too end up down below. But I had to put it out of my mind as Katie danced around in the pitch dark location without fear whatsoever! 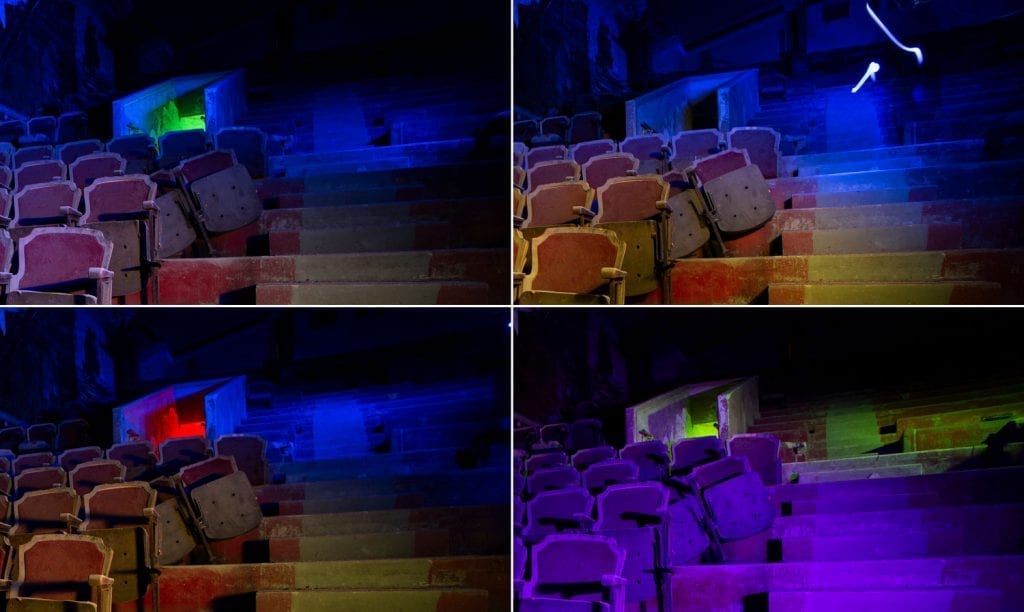 I was absolutely freezing by this point, but then, during one of our takes, I felt this warming presence come over me and disappear quickly as it came! Was this a ghost of the theatre’s storied past? Certainly felt like it! Admittedly, I silently asked for permission from the presence to continue shooting, as it seemed to disappear back into the rather rotting shell remains!

After several color combos, we finally decided to call it. It’s hard to decide between the final two we landed on. One matches up real nice with the stage shot, the other harkens back to our classic shot of the Palace Theatre in Gary, IN.

Let us know your thoughts! 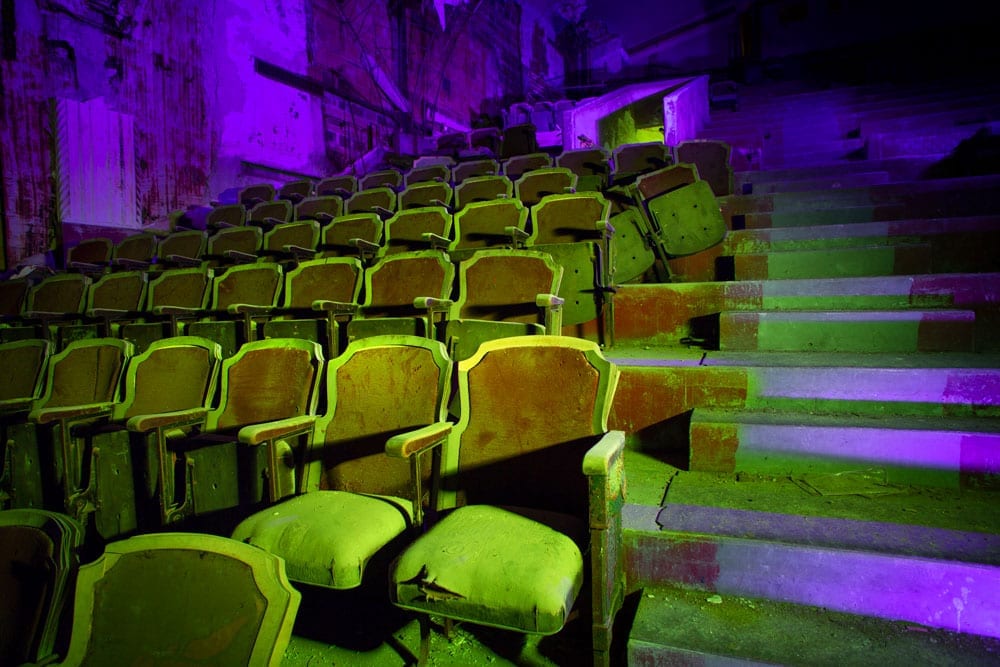 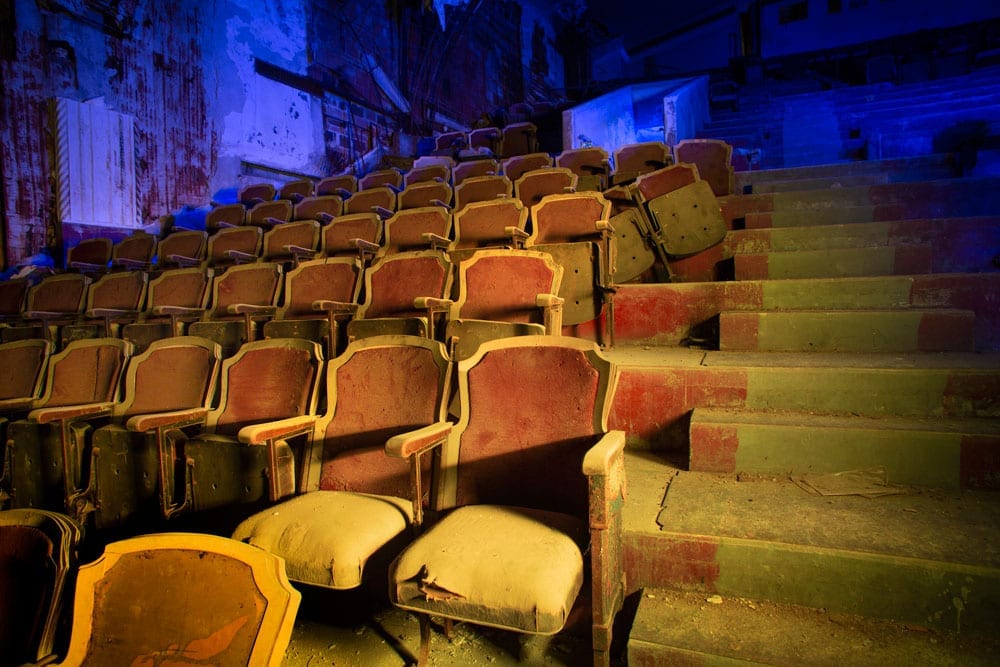 We made our way back downstairs, through the belly of the theatre, up onto the stage, and down the back staircase to shimmy our bodies through the hole. Even though it was nearly midnight, it felt blinding to be back in the streetlight!

Adrenaline certainly fueled the rest of our way home where we peeled off our disgusting shoes, pants, and winter coats in our back hall so we wouldn’t contaminate our kitchen. Grateful for Eric’s suggestion and help, we had another couple gems to show the world. There are rumors someone wants to bring this place back to life, but from these shambles…it’ll be tough, to say the least.

But if we learned anything that night, where there’s a will, there’s always a way.

Bonus thanks again to Eric Holubow! You can see his exquisite work here ›

And bonus thanks to White Castle’s Impossible Burger for the fuel and for making possible of an impossible night.

Why YES this artwork is ripe for purchase. Head on over to our shop right now › 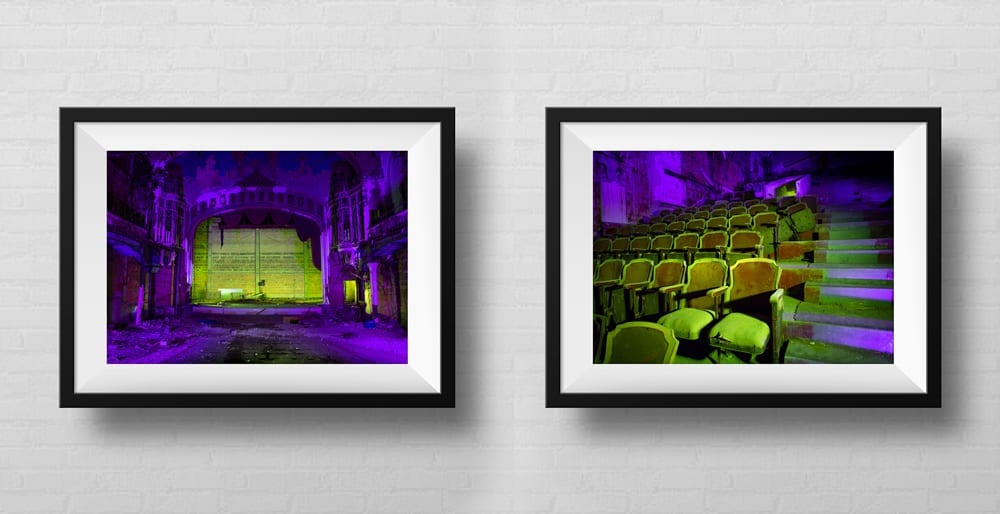