I’m Looking for a FreePort

In the vast reaches of rural America lie boarded, abandoned farmsteads and homes – more than one could possibly imagine. How did they get this way? Why are we actively seeking them out?

The waning moon rises quietly into the night sky as our wheels hit the road for a quick two hour drive. This time our destination is an abandoned house in the middle-of-nowhere Illinois by way of the southern Wisconsin countryside. The cascading moonlight barely cuts through the shadows of sprawling two-lane highway. Already up in the East, the full moon acts as a beacon with tufts of clouds brushing past its gleaming surface with lazy ease, muting the glow only for those fleeting moments.

The old home we seek went dark generations ago. While we know its approximate location, we still strain our eyes searching for the familiar shape we’ve seen in photographs. “There it is!” we yelp as we zoom past its slightly crumpled silhouette, peacefully decaying back into the dark earth. Another pass as we search for a good place to tuck the car away, we see a ramshackle gate that prevents us from nonchalantly pulling in the driveway. The very driveway all travelers of this rural route undoubtedly see daily. We decide to hide the car in plain view on a split-off from the highway. As we hike by foot back to the homestead, we hope to stay incognito. The journey down the dirty, ice-encrusted highway shoulder is indeed an adventure. As we hustle with camera gear in tow, we wonder if a driver, or simply a sleepy passenger nodding off to the drowsy landscape, were to spot us in his headlights, what would he think? Would he even see us? Or were we just a couple hooded shadows, merely an apparition as they cruise full-speed past our darkened human frames.

10:00 P.M. Finally we arrive at the gate, departing from the hustle and bustle of the country highway. We climb over the various “devils rope” and razor wire that had clearly been repaired numerous times. Looks we aren’t the first visitors of the year.

Our feet crunched across the ice-covered snow, the sound deafening against the blanket of silence that soothed the prairie. The clatter undoubtedly caught the attention of the farmers across the way, or the cows that echoed our footsteps with low bellows, or the other creatures bumbling through the landscape. Alas, it too late, no turning back now! Off in the chilly distance, behind the home without the protection of a complete set of windows or doors, we identify what we came all this way to capture under this amazing moonlit night. Not one, but two cars! Cars as abandoned and earth-claimed as the property they adorn.

We set up our gear and quickly came to the realization that too much farm equipment, grown-over brush, and gnarly branch-shaped shadows have crowded the composition of the old 62-63′ Chevrolet BelAir. The moon’s trajectory is picking up speed, as are those aforementioned cloud tufts, now gathering moisture and amassing into bloated globs of cloud cover. We proceed anyway, and ignore the impending exodus of moonlight, as it was perhaps, a not-so-quick-afterall, two-hour venture, and, when unhindered, the moon to the high East was a sight to behold. With strobe flash in tow, my wife wrestles with the overgrowth and hides behind the car’s steel door to light up the backseat and dashboard. 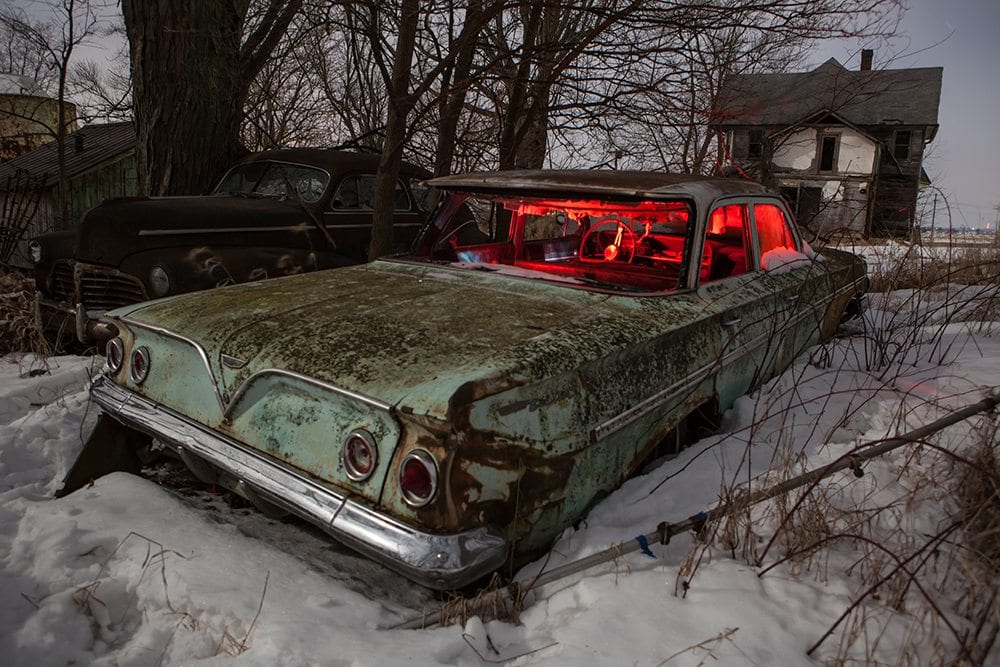 I watch as, without hesitation, she hustles up to the old farmhouse off in the distance to give the facing empty vestibule a couple pops of color, leaving me to stand idly atop the ice-coated snow. Suddenly, out of my peripheral view I spot a skunk galloping toward me with his tail at full mast, like a black and white flag of danger, spraying that pungent scent we’re all too familiar with, typically from the safe distance of our fleeing car. When I say galloping, I mean he is heading straight for me at a speed that raised every hair on my neck. Was I going to injured? No. But the reality of smelling like a skunk for the two hour ride home was one not to be toyed with. I grab a mammoth branch from the frozen tundra beneath me, as if that would stave off the gush of smelly skunk juice. All the while, Katie walks calmly back to the camera set-up to take a glimpse of her handiwork. With gigantic branch still in hand, I neglect to mention the skunk of which the pungent odor was omnipresent, as she casually strolls right by his hiding spot. She asks about the weapon I’m wielding. I confess. It turns out, February and March is skunk breeding season. It all made sense. Just looking for love, and in this case, with all the wrong species?

gettin Giphy with it

After a few more attempts at lighting the tableau of car and home, mother nature said enough of the unadulterated view of the moon she so generously provided up to this point. The cloud globs had paved the way for full cloud-cover. End of the night outside? Yes. But from my location source Aces and Eights, I am well-aware the inside of the forlorn home is full of older televisions in various states of vandalization and deterioration. Off we crunch.

Katie shows me the open window, with the ramshackle rural explorer-constructed step stool up into the home. Aside from the rusty nails along the window frame, entry was easy. One never knows if these old floor boards, rotting and exposed to the elements, will hold up. The landing seems sturdy, so we press on into the house.

We slowly lumber through the heavily littered rooms, packed full of dusty remains. It’s dark in here! We torch our way through with a dim flashlight, as to not alert the passers-by of our presence inside. We head down a hallway to the dining or living area, whatever its daily use in that former life of yesteryear.

Some windows are still in-tact, the gauzy, leaded-glass windows of old gave way to a breathtaking view of the rolling farm prairie beyond. Below our feet, bundles upon bundles of newspapers of yore coat the floors like a giant grimy blanket. Awkwardly scattered throughout the room are four television sets. Or rather shells of their original capacity, tubes long gone, lying in ankle deep pockets of dirt, dust, papers, and who knows what else?! We hone in on the only one we can comfortably compose, our boots wrestling with the paper piles as we set up the tripod.

Despite minimum dimmed levels, our flashlight acts like a blinding theater spotlight and alerts us to the air, heavy with billions of scampering dust particles. Particles of, again, who knows what? Unprepared, we try to breathe through mittens, sleeves, and sweatshirts, knowing full-well the attempt to filter the air is futile. The atmosphere was so thick, you could practically scoop it into your pocket. The old home’s tale lives in these particles. Take some home with you, it whispers. 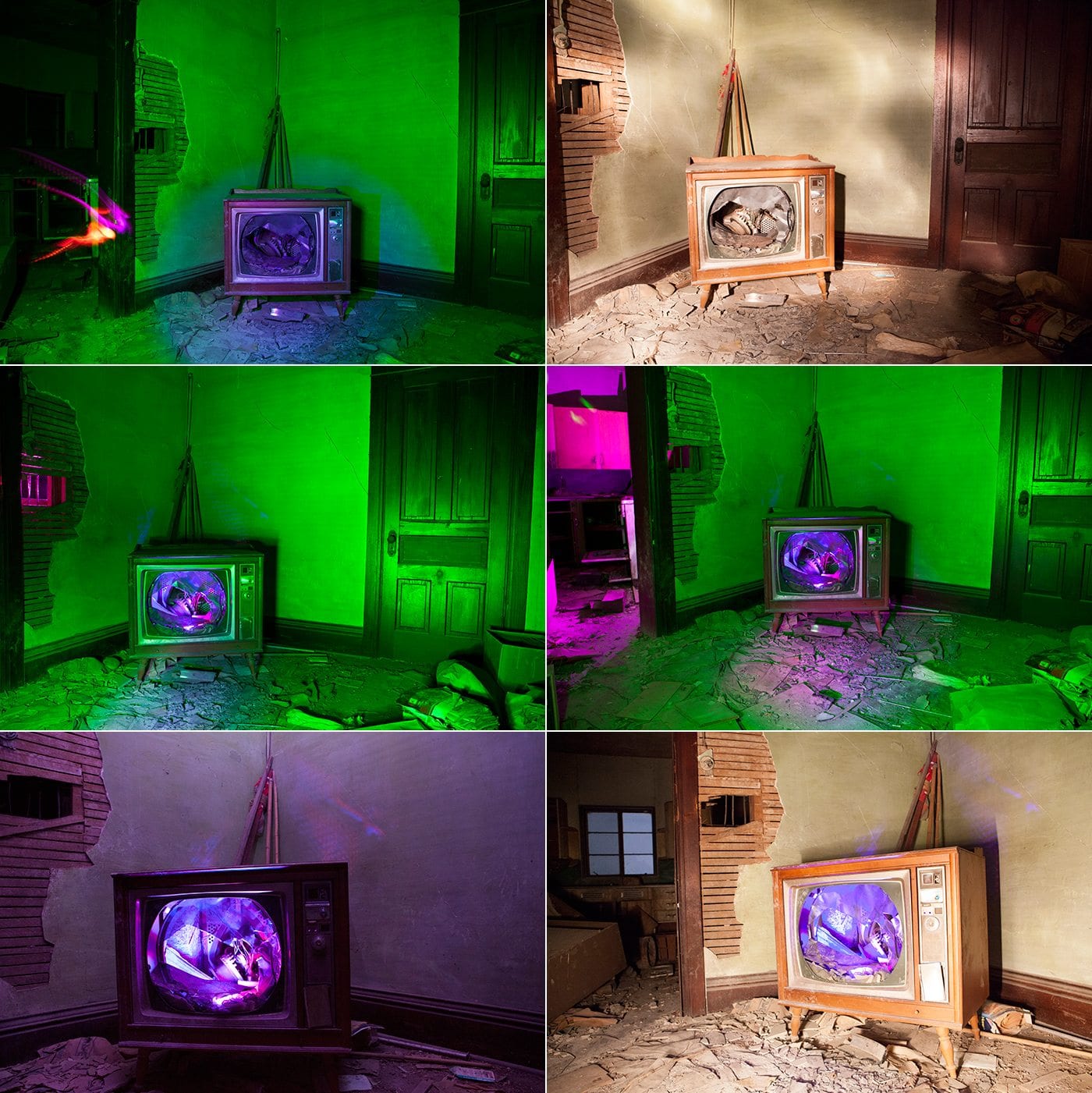 Now we’ve got it! 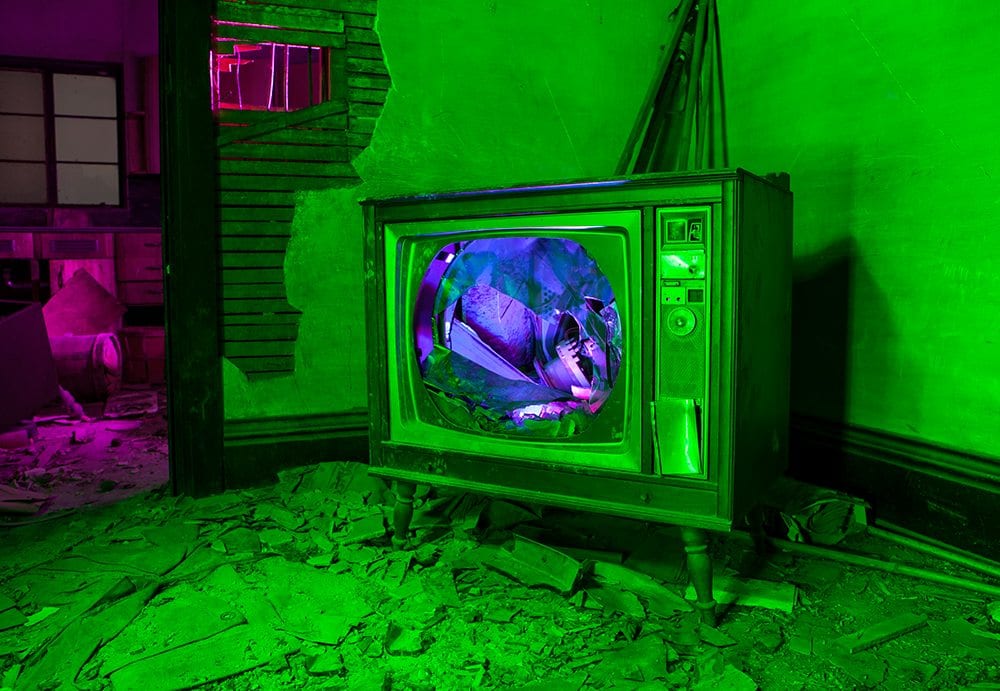 After several angles and altered compositions, our lungs scream that it is time to call it quits. The clock strikes 2 A.M. and a long, dark, daunting drive of two hours awaits; one in which we lose an hour via Daylight Saving, but lost none the less.

We ease out of the windows, feet first, and in doing so clearly rouse up a few more of our pungent little friends or maybe just the same one still looking for a mate. Well, I had found mine. The two of us hike back to the car unscathed. And like a mountain climber reaches his summit, or a musician writes her great love song…we relished in another successful tale, one we had scooped into our pockets to bring home and share with others.

To purchase this fine photograph, just hop over to our Etsy shop!