“Ah ha, hush that fuss, everybody move to the back of the bus.”

Sometimes a little adventure into the frigid winter turns into some Knowledge Dropped. Such was the case when we decided to throw ourselves a little belated Blood Blue Supermoon party after the clouds cleared the following night. Perfect skies. Not so perfect temperatures. With a low near 5 degrees, we bundled up and hit the road, south-ways toward central Illinois to find ourselves a Lost Bus, courtesy of some directions from friend and fellow photographer, Will Hiland.

Two and half hours later, we pulled into the lot of a nearby countryside tavern with two parked cars out front. Being so close to humanity, we figured: might as well step inside the bar to give them a heads up that two strangers are about to traipse around the property with flashlights. The barkeep was fine with it, confused I’m sure, but cool.

The bus was packed with all kinds of shenanigans, namely bags of some sort of organic material? It reminded us of ‘American Pickers,’ with Mike Wolfe diving around the junk to find treasure. Plus, there were a bunch of old rusty bikes, a Mike specialty. 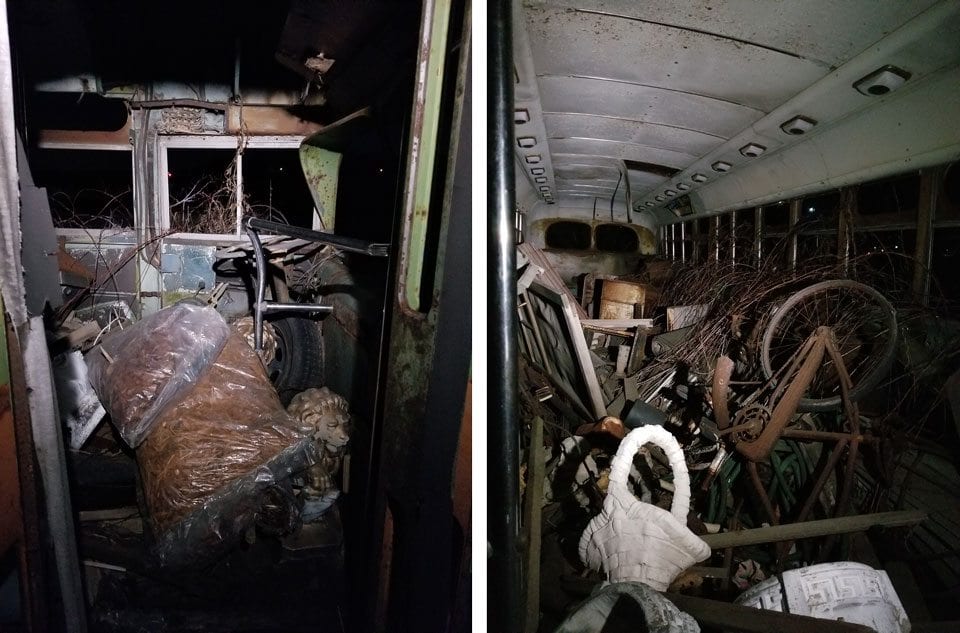 No time for a deep dive though, it was beyond ridiculously cold, so we got to work. 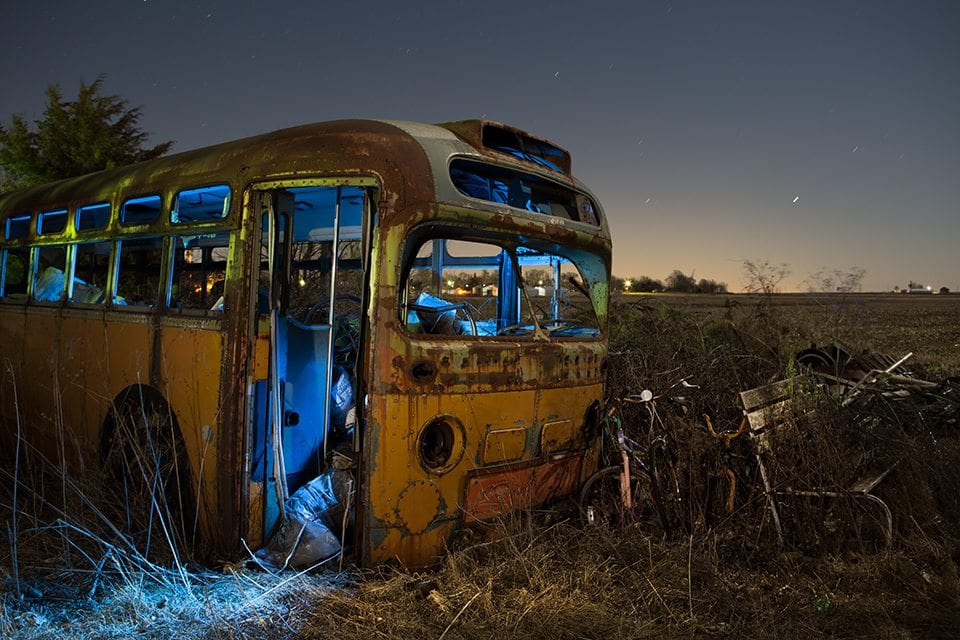 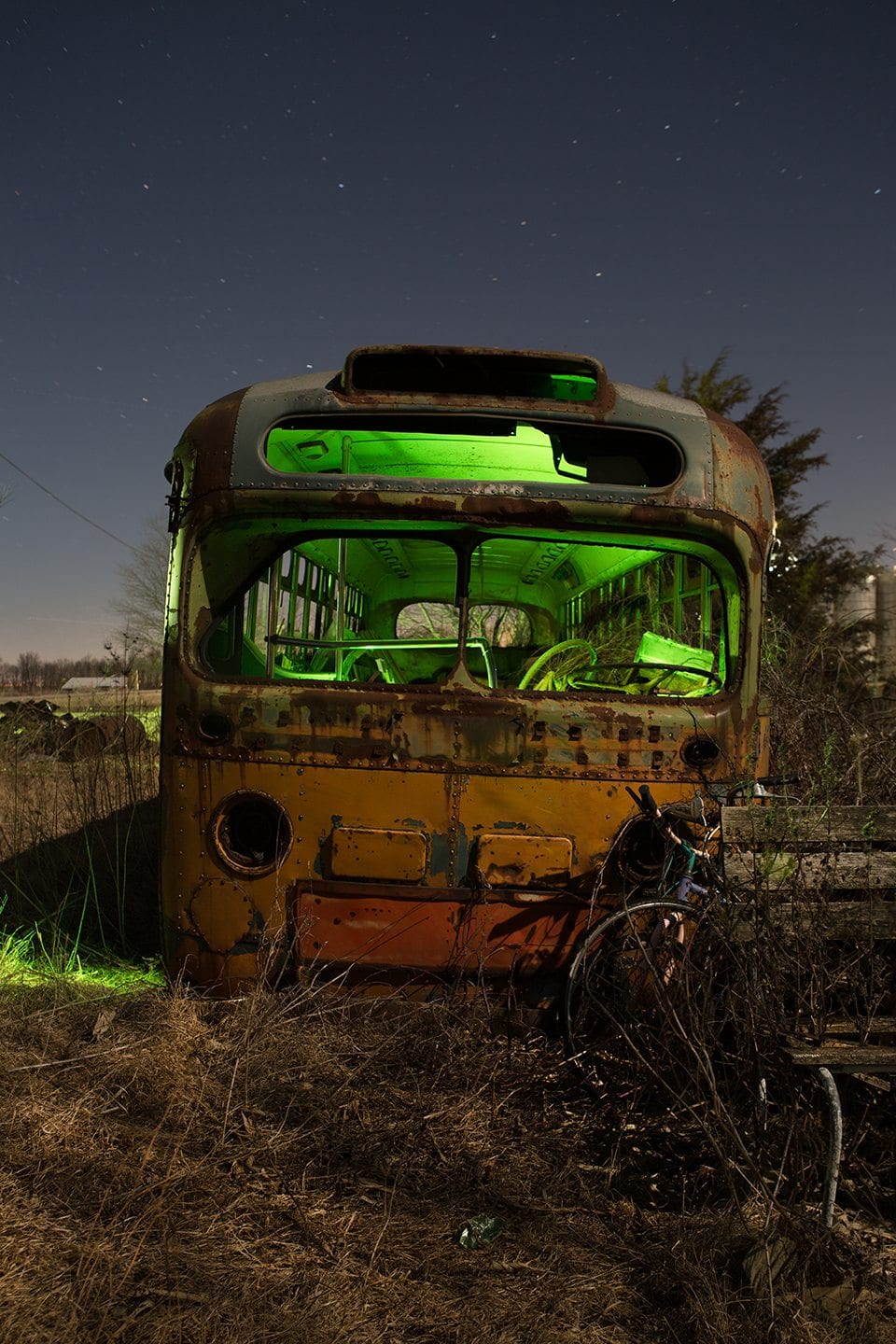 And shot this quick little video for you too, to show the crouching and bending. Nimbleness is of the essence in this line of work!

We spent two hours out there in the cold, but our toes lived to tell the tale. We jumped back in the van, vigorously rubbed some warmth back into our hands and feet, and pressed homeward, entertaining ourselves for the next 2.5 hours with pop radio hits of the ‘70s, ‘80s, ‘90s and today, with none other than Foreigner’s “Cold As Ice” leading the way.

So let’s give this bus a little more context

Back home, we took the deep plunge into the interwebs to scrounge up some more info. First off, this particular bus appears to be a 1948 General Motors “Old Look” coach, straight out of Pontiac, Michigan. The exact model number is elusive, but it looks like a 3207 or a 3610, without a back door, likely because it was a Suburban bus—not a city bus—used for some central Illinois transit system in the ‘50s. 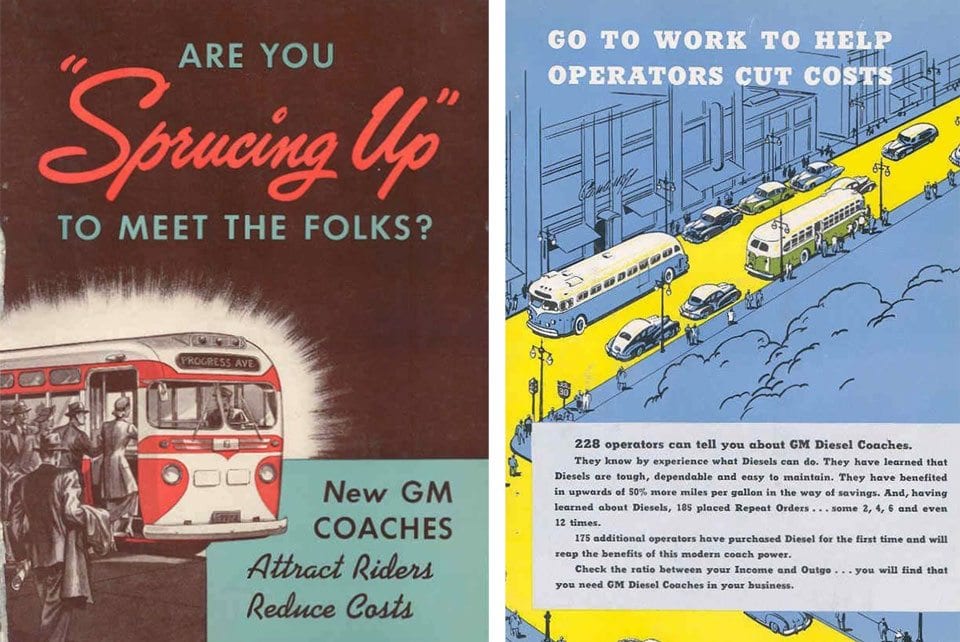 What really threw us into the proverbial rabbit hole was that the barely-there paint job is of the National City Line variety, identical to that of the Montgomery, Alabama bus line of the mid-‘50s. Orange, green, and white. The famous Rosa Parks’ bus. The bus which sat in an Alabama field rusting away for three decades before going up for auction, purchased for nearly half a million dollars, and placed inside the Henry Ford Museum in Dearborn, Michigan, and eventually fully restored. 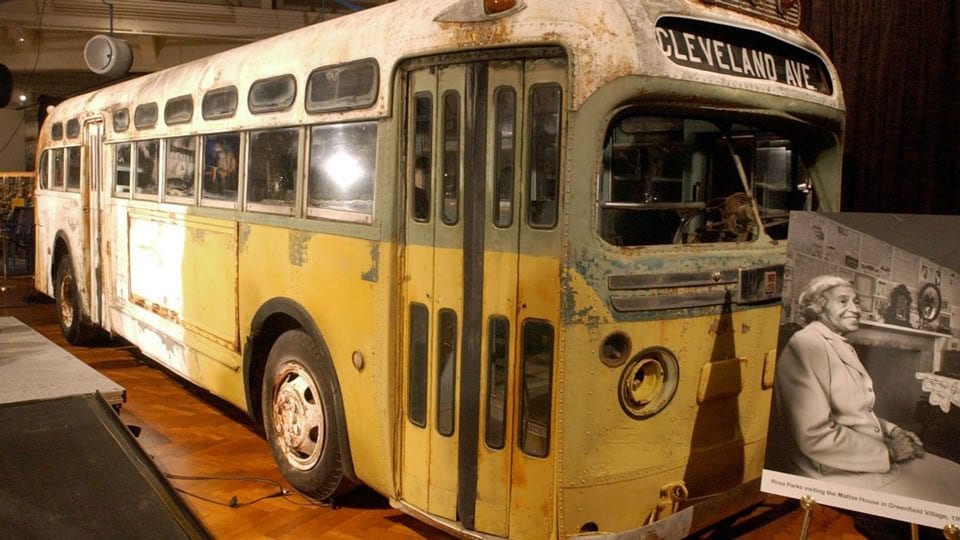 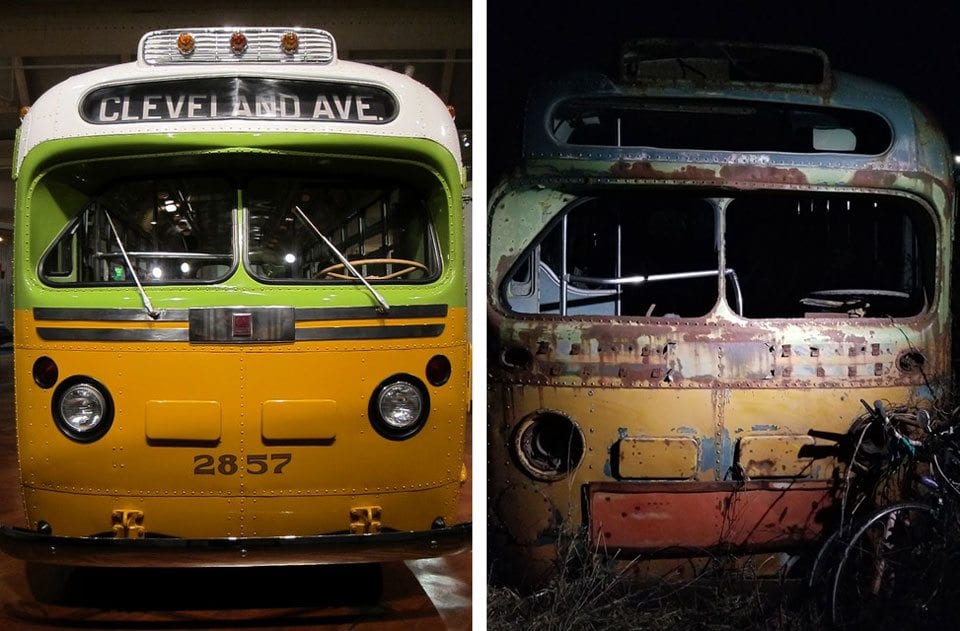 “I’m gonna make you care. Look, I know we have a long way to go, but hearing these stories from these icons, it makes me want to keep fighting.”

After an extensive afternoon of reading more about Rosa Parks and the Montgomery Bus Boycott, that night we watched the week’s episode of ‘Superior Donuts‘ on CBS. Based on Tracy Letts’s play (which premiered at Chicago’s Steppenwolf Theatre in 2008), the sitcom features characters from different races, religions, and creeds (Black, White, Columbian, Middle-Eastern, Jewish, etc.) who hang around a donut shop, testing one another’s values and learning various life lessons about cultural acceptance. The great thing about the show, though, is that it’s not a Full House style of “acceptance” with sweeping violins and hugs at the end, but instead puts a spotlight on the less warm and fuzzy areas, namely on those of us who think we’re woke, but are still totally clueless.

In this particular episode, Franco, one of the lead characters, played by Jermaine Fowler (who also wrote the episode) puts the rest of the group on the spot and asks them to name as many Black historical figures as they can—figures who aren’t athletes OR one of the “Big Four” typically vaunted for Black History Month (Dr. Martin Luther King, Jr., George Washington Carver, Harriet Tubman, and, you guessed it…Rosa Parks).

Of course, this got us thinking.

So the following day, we got the research engine revved back up to take a closer look at some black history’s unsung heroes. In just one quick search, via this Marie Claire article, we discovered a totally different young woman who also stood up for her basic human rights by sitting down. The only thing though…it was nine months prior to Rosa Parks’ experience. 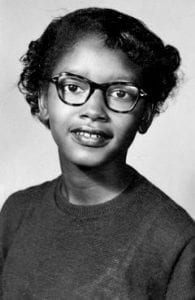 Enter: 15-year-old Claudette Colvin. Earlier that year, 1955, as she was riding home from school, she refused to give up her bus seat to a white onboarder. Despite threats from the bus driver and even though her fellow passengers moved, Colvin shouted that it was her constitutional right to sit where she wanted to sit. Doesn’t matter though because the cops arrived, dragged her off the bus, arrested her, and threw her in jail.

To get a…well…semi-realistic taste of what this experience must’ve been like for a young teenager, you have to watch the story told via none other than ‘Drunk History.’ (If you’re not familiar, it’s a Comedy Central/Funny or Die series where the storyteller gets drunk and then sloppily recounts some typically serious historical event on camera while actors reenact the events on a set. It’s not always the most accurate, but enlightening and hilarious nonetheless!)

The slightly more detailed account goes as follows: Eventually, after her arrest, Claudette Colvin joined up with four other women (Aurelia S. Browder, Susie McDonald, Mary Louise Smith, and Jeanette Reese) who were forced to give up their seats, and collectively took their case to the Supreme Court in Browder v Gayle (Gayle was the Alabama governor at that time). It was THIS very case that would lead to the U.S. Supreme Court’s order for the desegregation of Alabama’s bus system.

But why was it Rosa Parks, not Claudette, who received the notoriety for such a pivotal moment in black history?

Aside from Claudette’s young age, historians credit it to the fact that Parks was such a high profile member of Civil Rights activism and the NAACP—a “pillar of the community” so to speak—while Claudette was too young and outspoken. Some even say that Parks’ appearance—lighter skin and middle-class—played a role. Even so, people were definitely outraged over Colvin’s arrest. The Women’s Political Council (WPC) and the NAACP were simply searching for the ideal way to take their action to the next level, especially after attempts made all summer long to work with the bus system on changes. When those promises were broken, and Rosa Parks was eventually arrested, everything fell into place.

After Parks’ incident, the WPC printed and distributed 35,000 leaflets urging for a city-wide bus boycott. To keep the momentum alive, they formed a smaller organization, the Montgomery Improvement Association, to focus on an indefinite extension of the boycott. Their president? A newcomer to Montgomery: 26-year-old Reverend Dr. Martin Luther King, Jr.

The Montgomery Bus Boycott lasted 381 days (crippling the bus company’s finances), until the Browder v Gayle Supreme court ruling in 1956. The rest is, of course, history.

And while Parks’ role in history at the time was crucial (some say Dr. King would never had risen to the role he eventually played if it hadn’t been for Parks and the boycott), the irony is that it was Claudette Colvin, along her fellow plaintiffs, who were the ones who helped change the law.

Our point here is that Franco was right in that ‘Superior Donuts’ episode. Admittedly, you won’t always care about the unsung heroes of history until something makes you care. And apparently that “something” can be a completely unrelated vintage bus that just so happens to be rusting away in a field, just like the historic Rosa Parks bus once did for nearly 30 years.

This rusty Lost Bus feels a lot more found, but in a way we never anticipated. It proves that stepping in a little deeper is ALWAYS worth the effort.

So, of course, it’d be a travesty NOT to create an Adventure Soundtrack filled to the brim with as many good bus songs as we could think of:

But more importantly, included in the mix is a version of the Rita Dove poem about Claudette Colvin, set to song, by John McCutcheon. After she suffered through tons of flack from her attachment to the Supreme Court ruling and reputation as “the girl who got arrested,” it’s no wonder Colvin kept a low profile. Fortunately, she found a more peaceful existence in New York City as a nurse’s aide. Awesome that this unsung heroine finally got her song.

I take the Number 6 bus to the Lex Ave train, and then I’m there all night, adjusting the sheets emptying the pans. And I don’t curse or spit or kick and scratch like they said I did then. I help those who can’t help themselves, I do what needs to be done . . . and I sleep. Whenever sleep comes down on me.

For Claudette Colvin’s personal account of these events, you can listen or read her interview on Democracy Now! here.