Will Rogers Motor Court:
Lost but not forgotten 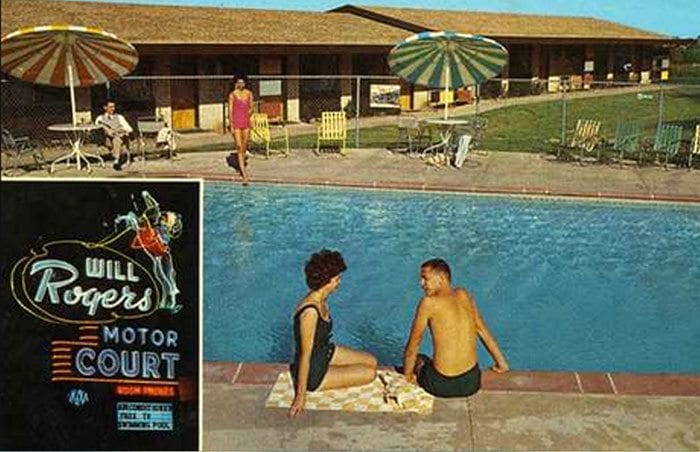 The Will Rogers Motor Court was once located on Route 66 on the “East Edge” of Tulsa, Oklahoma. The motor court location of 5827 East 66 or present day Eleventh Street is nothing but an empty field. What happened to this institution of the Route 66 glory days? More importantly what happened to that neon sign complete with cowboy–let’s assume Will Rogers himself–atop a bucking bronco, tossing his lasso around a sign that once beckoned travelers of Route 66 on Tulsa’s east edge of town?

First, let’s rewind briefly to the backstory of famous actor Will Rogers after whom the Motor Court was named! 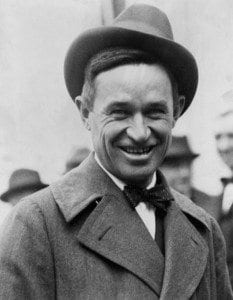 Will Rogers was born in November 4th, 1897, into a prominent Cherokee Nation family in Indian Territory now Oologah, Oklahoma. Rogers was a world traveler, writer, cowboy, vaudeville performer and screen actor with staunch Democratic political views. To prove campaigning was, in his words “bunk,” he ran a mock campaign for president in 1928, with the sole platform that, if elected, he would immediately resign. And yet one of his most famous quotes (of which there are numerous) comes right out of his political musing period: “…for I never yet met a man that I dident [sic] like,” a reference to Russian Marxist Leon Trotsky founder and first leader of the Red Army.

One can tell from a very short amount of research that the films throughout Rogers’ acting career (both silent and “talkies”) were laced with a lot of his humorous insight and wit. Of course he has since left a legacy in Oklahoma, not just in the naming of the Will Rogers Motor Court, but much more famously by way of Route 66’s unofficial moniker, “The Will Rogers Highway.”

I have found very little references or history related to the motor court motel, but it appears as though the building was demolished sometime in the early 1990s. One such reference was from noted Route 66 author and historian Michael Wallis (know to many in today’s pop-culture as the voice of the Sheriff in Disney Pixar’s Cars). In the Sept-Oct 1984 issue of the Oklahoma Today he mentioned:

I recently discovered yet another piece of the puzzle that was the Will Rogers Motor Court lying unassumingly inside my coffee table! A long while ago, my grandfather passed away and left behind a very large collection of matchbooks from his days of traveling on the road. It appeared no one wanted the collection, which sat in his basement untouched for years. I gladly took them! So a few months ago, while planning out one of my pending Route 66 journeys, I gazed into my coffee table—a glass plated structure with separated cubbies that I have filled with my Grandfather’s matchbooks—only to discover a piece of Route 66 history right in front of me!

After coming up pretty empty-handed in my research of this place, practically erased from history, I thought what better way to share the past without parting with the item from my collection than to make prints and a t-shirt! 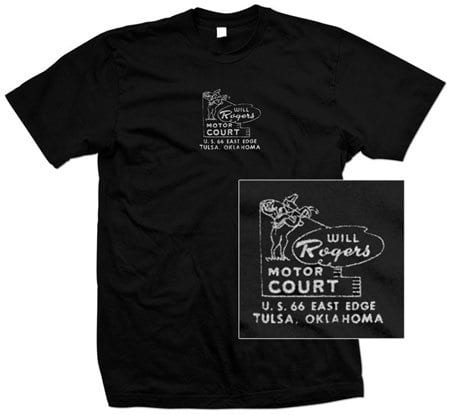 The t-shirt graphic was created using the very matchbook that was passed on to me many years ago. The design is screen-printed personally by the Fading Nostalgia team on demand. It will contain various imperfections of anything that is not by machine, but by hand. All proceeds keep us on the road and helps us to find places before demolition begins in hopes of raising awareness.

[Ed. Note 2015: Shirt no longer available…unless you REALLLLLY want one!] 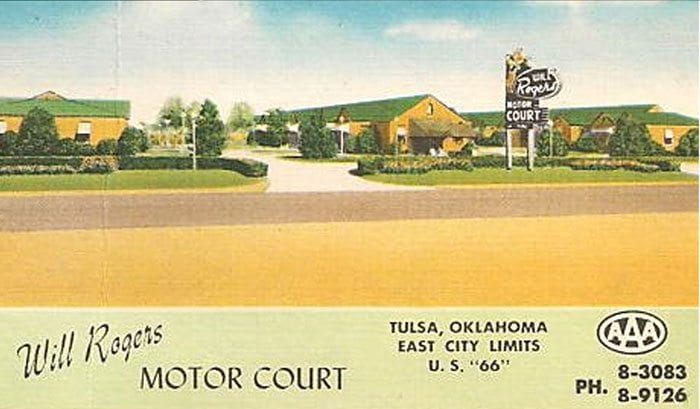 If anyone has any stories or experiences with the Will Rogers Motor Court, we would be more than grateful for additional information! Meanwhile, if you yourself are researching Will Rogers, there is much more history to be gleaned from the Will Rogers Museum in Claremore, Oklahoma.