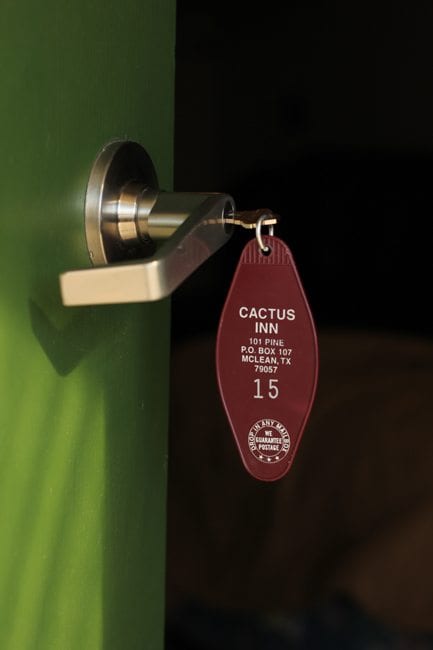 We stopped inside the Cactus Inn office the next morning to drop off the key and thoroughly enjoyed chatting again with Peggy for a little while! Just like old friends, we traded stories about travels, family and just life in general. She told us about how she and her husband love to head off to the free-spirited Taos in northern New Mexico. Now Chris and I just have to go since it sounds like quite the magical place!! We also had the pleasure of meeting Peggy’s beyond adorable chihuahua Molly!! Tiny little girl with a huge heart…you basically want to put both Molly AND Peggy in your pocket and take them home with you. Chris and I have commented many times throughout the trip back to Milwaukee how we miss the two of them! Hopefully we’ll travel through McLean again soon as it has now become a must-stop on our every-increasing must-stop list.

And we were off once again! This time we had quite the journey ahead of us in order to make it to Lebanon at a reasonable hour. But it’s so tough NOT to stop! There were so many places we wanted to see like the super long Pony Bridge near Bridgeport/Hydro Oklahoma, which we couldn’t even photograph due to a parked SUV. We soon discovered that it was a Sheriff spying with binoculars on some kids four-wheeling down below. 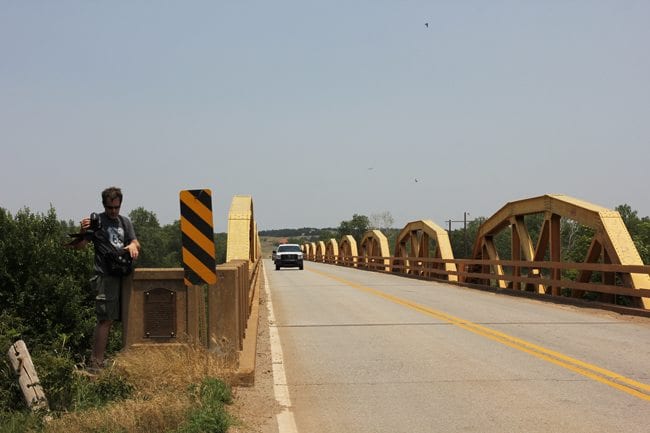 And we HAD to stop at the Shoe Tree near Stroud/Depew…turns out it had fallen down since we last stopped! All that was left was the hand-painted sign and a jagged stump. Super sad!! Luckily people started a couple new Shoe Trees near by. 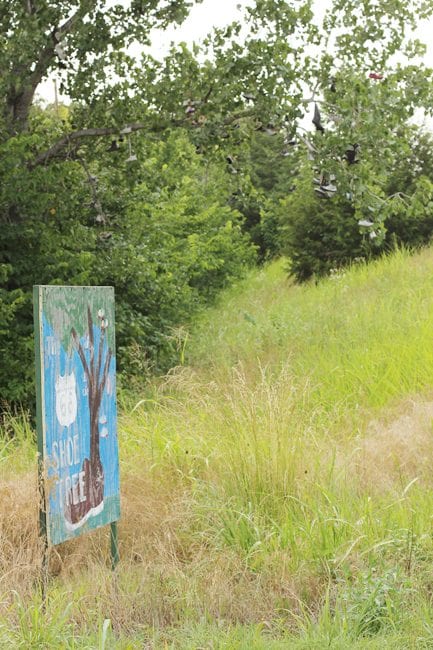 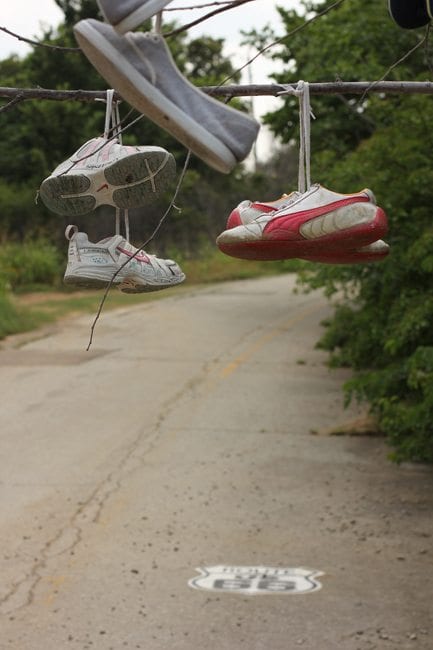 In Sapulpa, we made a point to find the remnants of the TeePee Drive In and as we pulled into the gated driveway, a truck pulled up. It turned out to be Keith, one of the many people cleaning up TeePee so it can be opened up this summer! He asked if we wanted to explore the grounds and obviously we took him up on it. 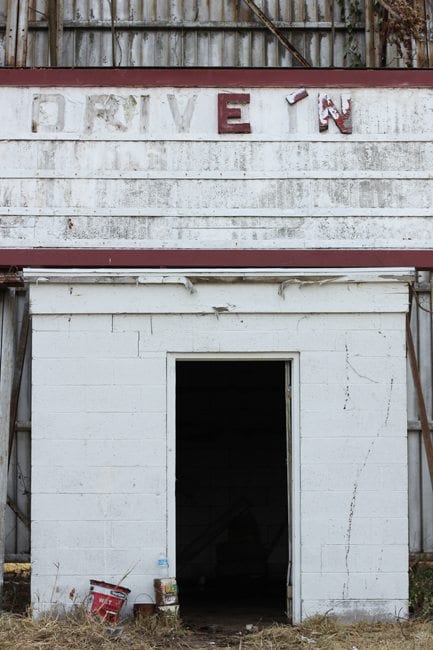 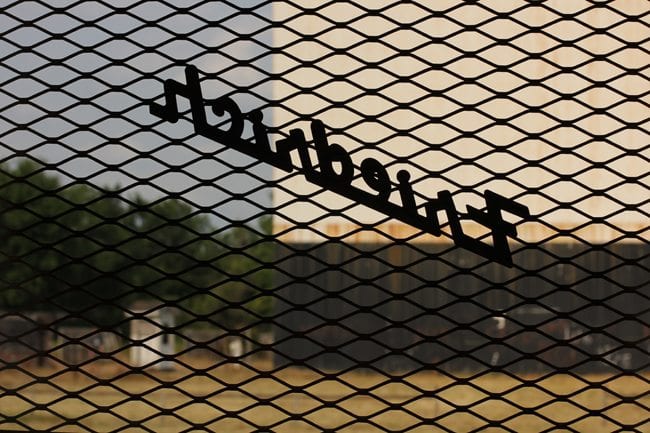 We chatted awhile about the efforts people are making…he was so sweet and excited to be there to help. We’ll be sure to expand on this story in the coming weeks as developments progress, but to read more about what volunteers have done so far, please read Ron Warnick’s story on Route 66 News.

And yet another section of 66 we’ve never visited is the pre-1937 section of road near Miami and Narcissa, OK, which is only 9 feet wide. So silly to us now, but definitely classic 66! 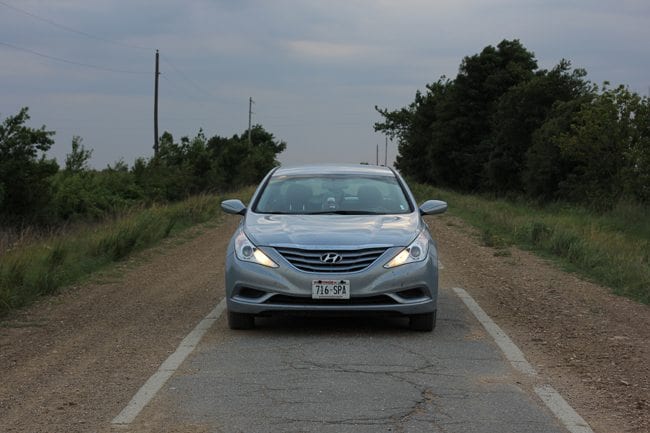 At this point the sun was indeed setting and we were so close, yet so far from the Kansas stretch of Route 66. We couldn’t believe we were going to miss it yet again!!! We stopped at Waylan’s Ku-Ku Burger for a late dinner and to mull over the decision to stay in Miami for the night in order to see Kansas or plugging on to stay at the Munger Moss Motel in Lebanon, MO as originally planned. 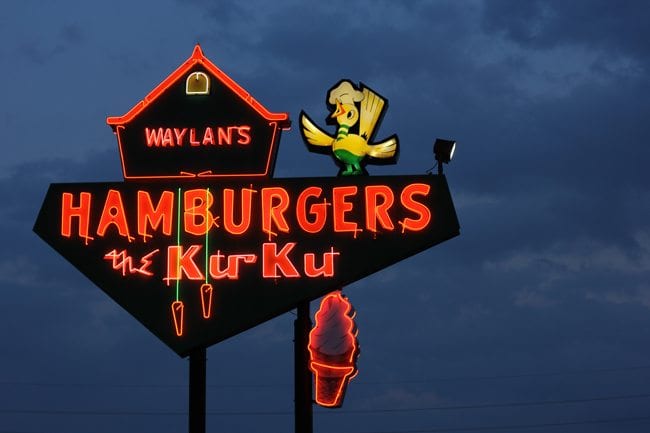 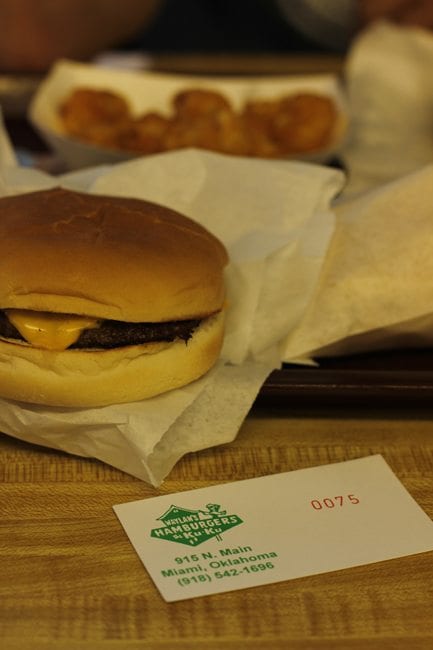 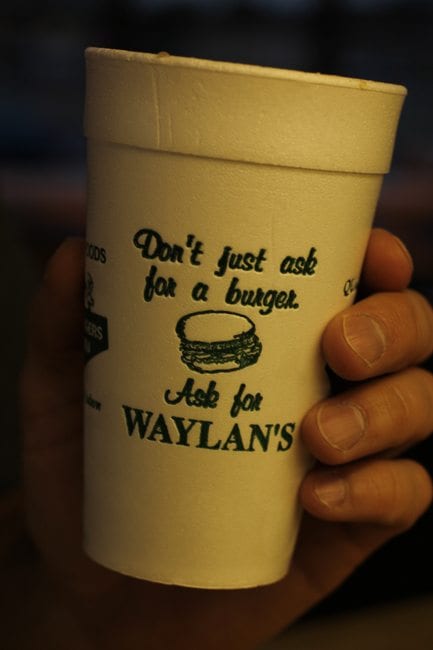 While “it’s about the journey not the destination” swirled around in my mind, an 11+ hour drive home from Miami on the last day of our trip would force us to just speed through the interstate—no stops. So we wouldn’t be able to enjoy Kansas anyway. With heavy hearts we finished our cheeseburgers and headed on into the night (making a call to Ramona at the Munger Moss to warn her of our late arrival, of course!) 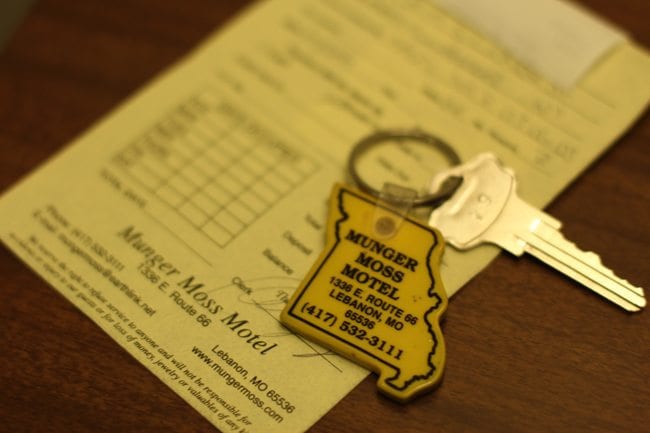 The following morning we woke refreshed and indeed relieved that we did NOT have an 11 hour day ahead of us…that we’d be able to drive home somewhat leisurely. We pinkie swear the entire southeastern corner of Kansas that we will be back! Polaroid photos WILL happen and it won’t be dusk when we roll through. 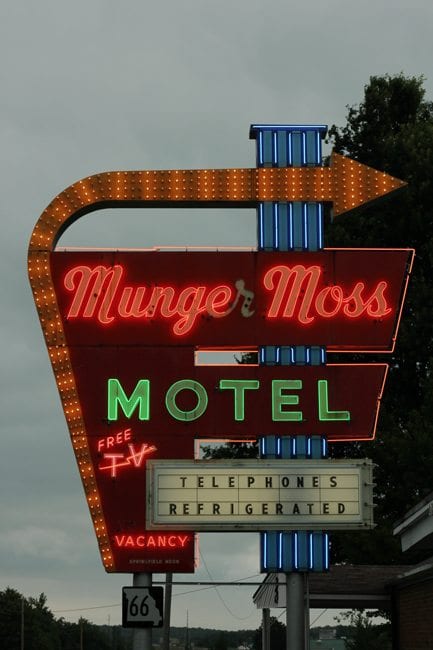 We chatted with Ramona awhile apologized for being so late and thanked her for being so accommodating. She told us she’s used to it and was simply happy we wanted so badly to stay there! After a round of awesome hugs and goodbyes, we headed out for some Waffle House breakfast to avoid an insane thunderstorm that rolled through southern Missouri. We took 66 home for awhile before hopping on the Interstate. 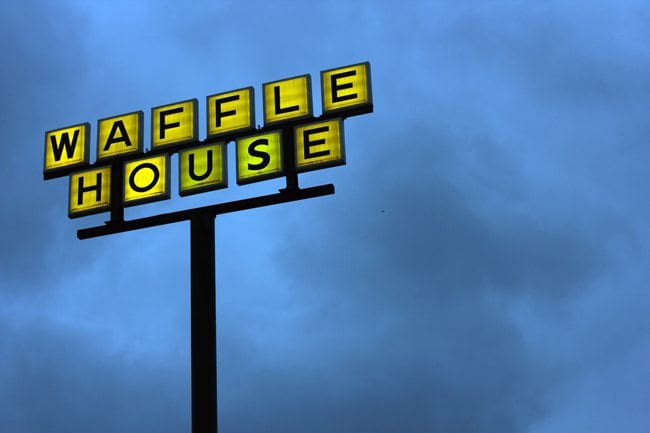 Amongst our stretch stops, we grabbed some pie at the Palms Grill Cafe in Atlanta, IL (two stops in one trip, how lucky are we?!) 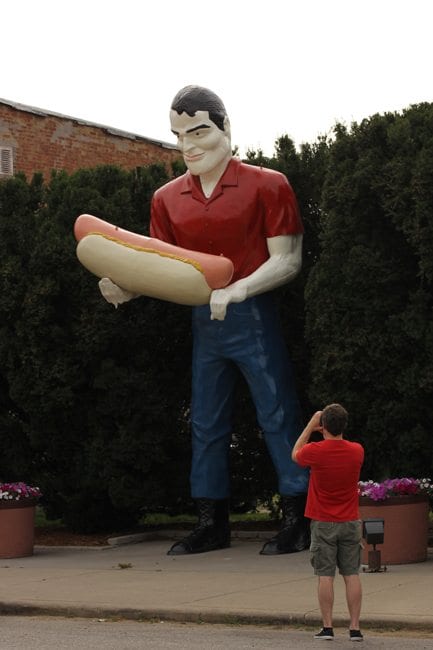 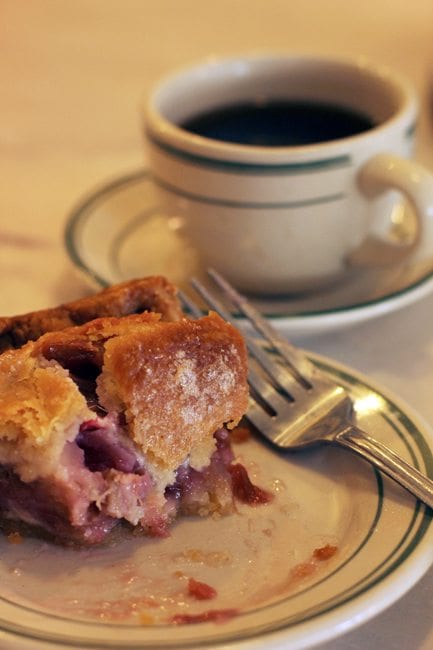 This would be our last Route 66 venture before veering up on I-39 to take the “fast and cheap” way home (only one toll).

And so ends our June Book Tour by name, but Adventure of a Lifetime by spirit.

To all of the people we met: You gave life to our long road traveled (nearly 2600 miles!) It may just be a series of interconnected streets, but without its 86 years of travelers and caretakers, Route 66 is just a highway with a cool name. We can’t wait to see you again one day!

To all of the people who followed along via the blog, twitter and/or facebook: Many, many thank you’s!! Obviously a road trip never needs an “audience” but having one means that the stories of 66 aren’t going unnoticed. The more we share, the more likely someone out there will be inspired to take a trip of their own. Seeing the history, selling some books and picking up some cool souvies are all just gravy. Inspiring someone else the way we have been inspired is our biggest goal of all, and we honestly consider ourselves pretty lucky people to have this kind of opportunity!

So with that said, it’s been a pleasure actually following through with this (sort of) daily updated blog of the trip! (While avoiding chains like Mickey D’s and Bucks was predominantly part of the plan, using their free wifi was admittedly pretty stellar.)

And that’s all she wrote………Until next time!