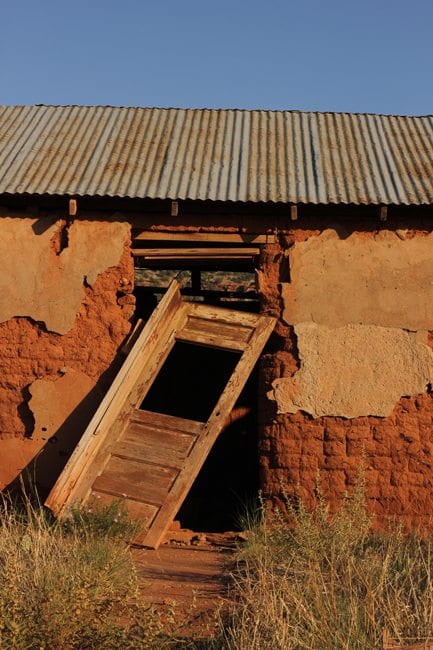 After cookout fun with the Tucumcari natives (both real and honorary) the night before, Chris and I headed for some night photography fun out west in Cuervo and Newkirk, NM…a couple of ghost-ish desert towns, the former hanging on by a thread by way of giant sign advertising a website for Cuervo land for sale and the latter by way of a still functioning gas station that may or may not have served as a meet-up for illegal behavior that night. Unfortunately it was far to windy and the moon was far too waned for a proper night’s work. Despite Chris’ solid tripod, you could still see the shakiness of the star trails (exacerbated by the length of which the shutter remained open due to the slightly-fuller-than-quarter moon). But it was another great time per usual! 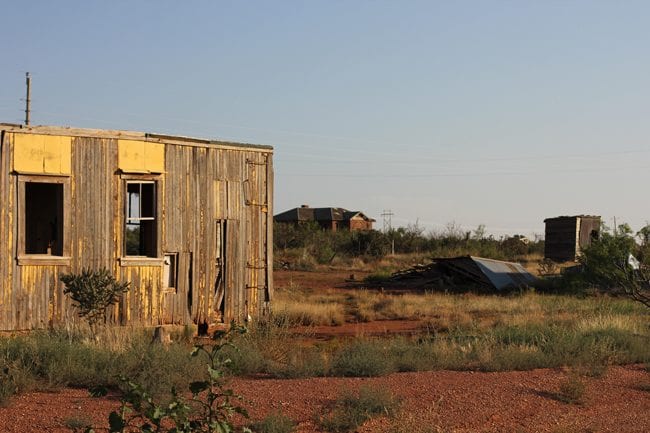 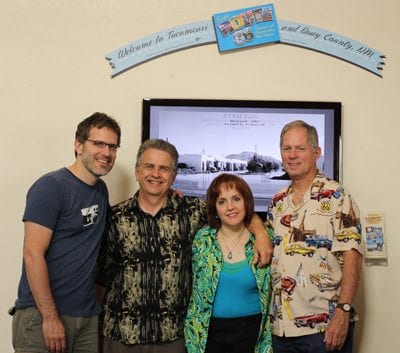 The Wheels on 66 Crew

The following morning we set up shop at the TCC once again for another few hours of book-signing fun. The highlight was chatting with town residents Skylar Kaye and Tucumcari Rosie about Fading Nostalgia and the whole Route 66 spirit. It was definitely an inspiration for us both! We chatted with the other authors too and got a photo of them with Chris before we said our Tucumcari goodbyes. It’s really difficult to thank Blue Swallow owners Kevin and Nancy enough for all their hospitality and generosity this past weekend. Their kind and sweet midwestern spirit is perfect for this iconic little southwestern town. We truly can’t say enough about what a gem the Blue Swallow, even outside of all its history. Kevin and Nancy have breathed new life into the motel, both physically in the restorations they’ve undertaken, as well as spiritually in the warmth they extend to everyone who stops by. So McLean, TX would be the next town we called home for the night and in Interstate Time, it was only three hours away, so in Route 66 Time, well we had plenty of time to get there. And plenty of time did we take!! 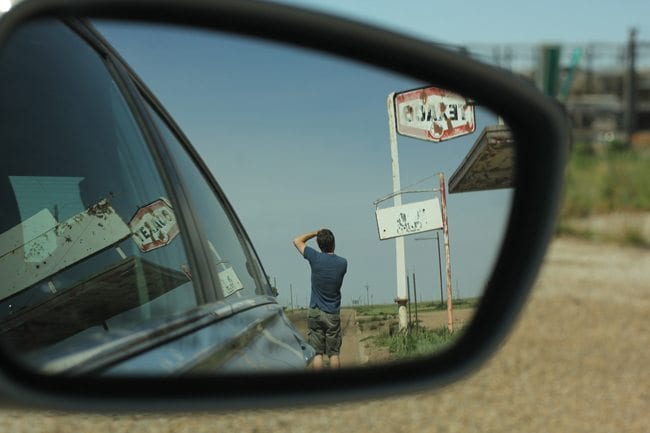 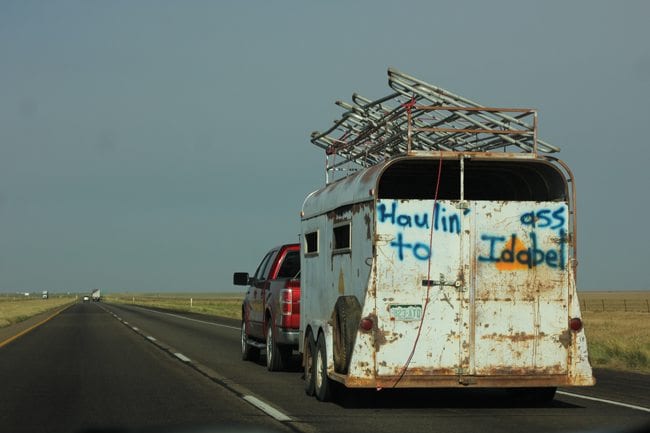 One part of the Route neither of us had ever taken, shockingly enough, is the epic stretch of dirt and gravel that takes you from around San Jon, NM into just outside of Glenrio at the Texas border. Forgotten buildings and towns (Endee, Bard…) sit along Old 66 here. It truly is one of the more remote and beautiful sections of the road just because you feel transported to the days of old, before asphalt and concrete, before semi-trucks and cars riding your bumper to go faster. We took our time and hopped in and out of the car every so often to take it all in (even despite the fact that the temp outside was about 104…dry heat though, ha!) 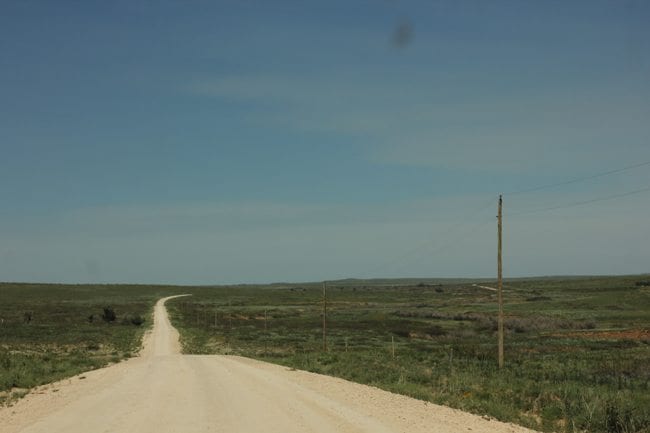 Endee of the Road 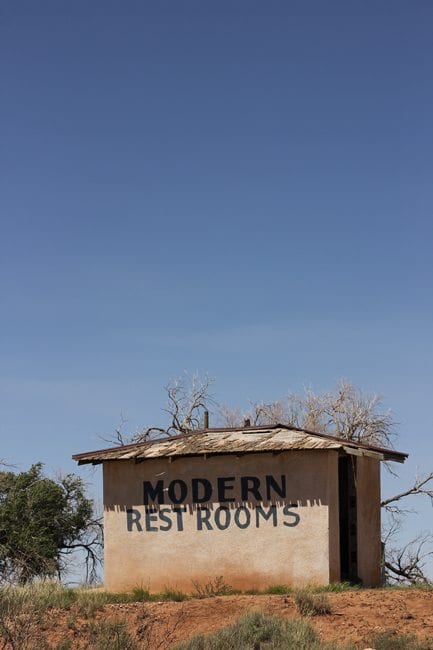 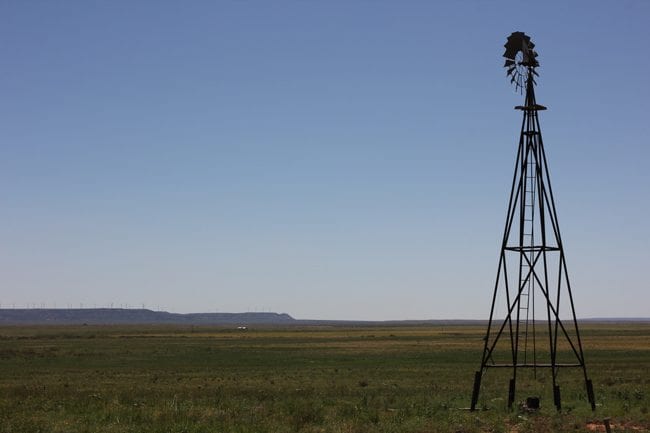 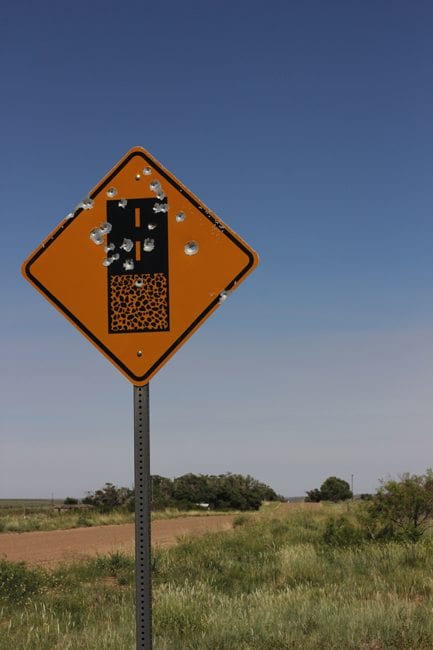 We also drove through another virgin-to-us location, the ghost-ish town of Jericho, TX. 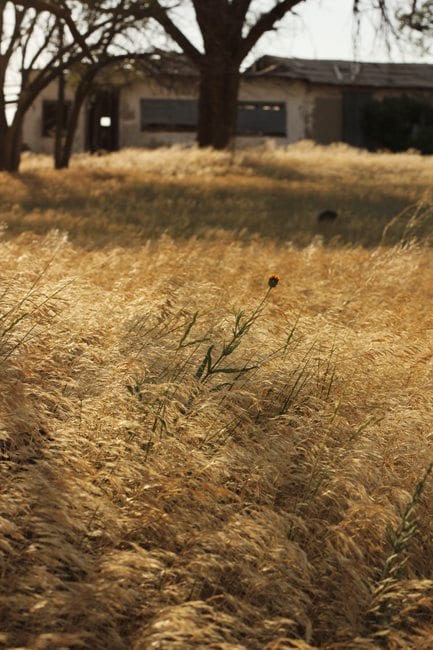 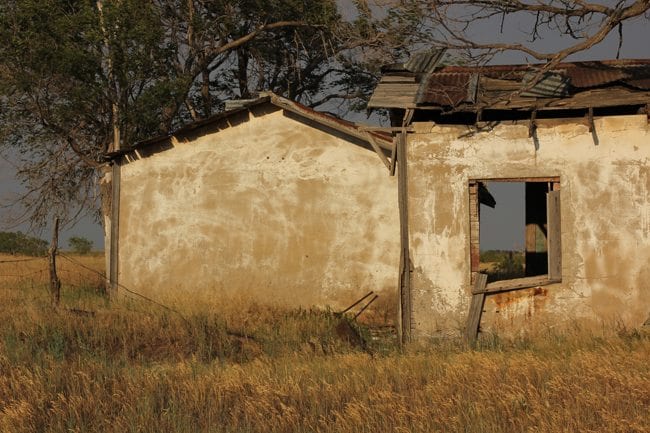 And finally, before heading into McLean, we stopped back at the Conway Bug Ranch as Chris had made quite the discovery when we popped in on our way west: the now-defunct trading post/gift shop was still stocked with a bunch of old stickers. This I had to see. 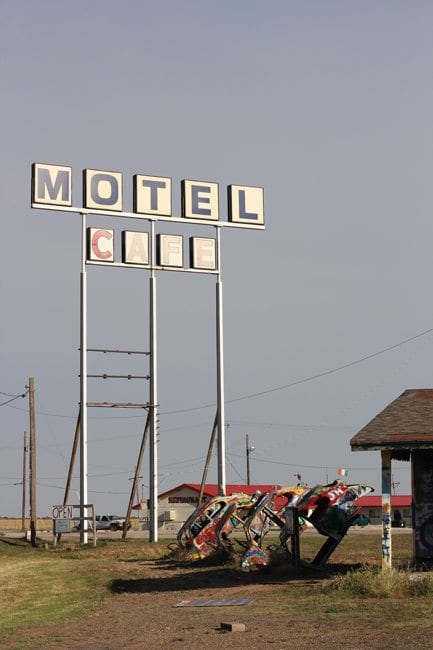 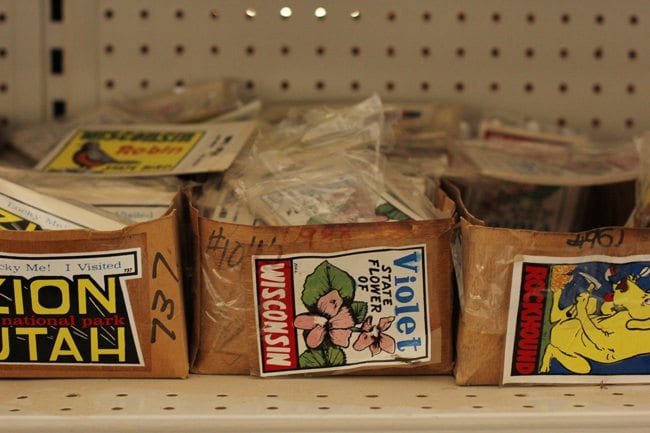 Sure enough, boxes and boxes of bizarre bawdy, jokey and state stickers lined shelves of this demolished storefront. There wasn’t much else left there aside from piles of guest check “ticket” pads, a lazy-boy recliner and a golf bag. 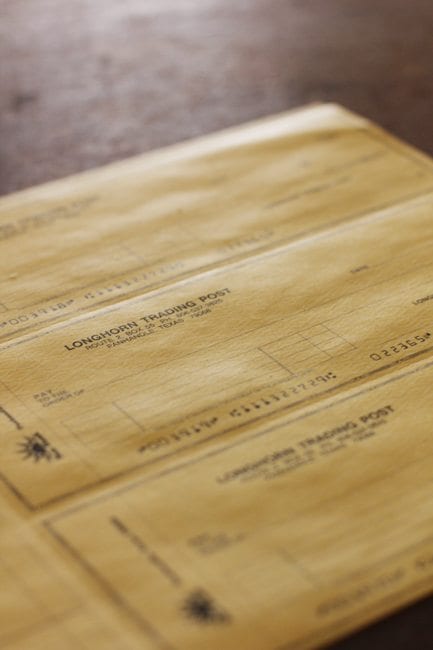 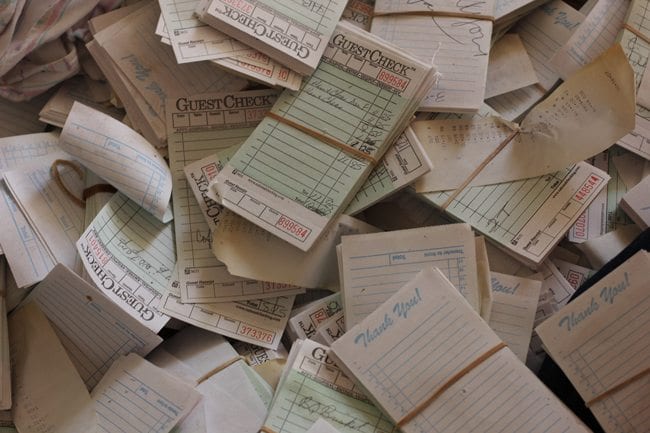 It was really sad actually…Chris said he swore this place was up and running several years ago when he came through…so it makes you wonder: what happened exactly? How could someone leave a place in such disarray? The only answers that seemed to fit were sad ones. I’m sure lots of people who have come through the abandoned Bug Ranch Longhorn Trading Post gift shop have taken more than just a photo or two. But if those lonely stickers find love from some 66er or road-tripper, I think that’s a heck of a lot better than collecting dust on some deserted shelf. 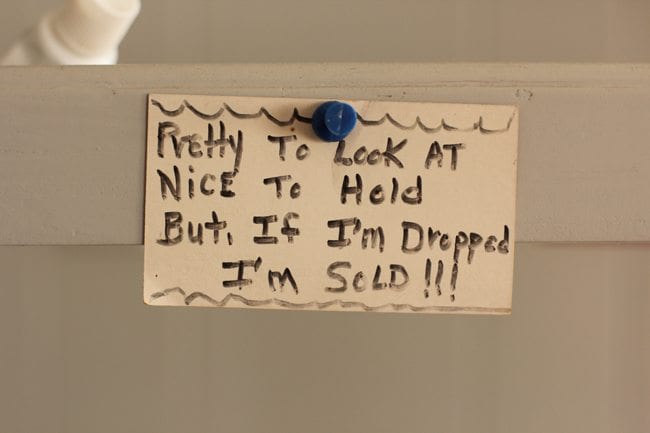 We reached McLean not a moment too soon! The famous Red River Steakhouse was going to close in less than an hour. We checked into the Cactus Inn next door first and spoke with the lovely, the gregarious, the adorable Peggy…sweeter and more refreshing than a glass of iced peach tea on a hot day. We traded a few stories and it was like we had known each other for years in a matter of moments. 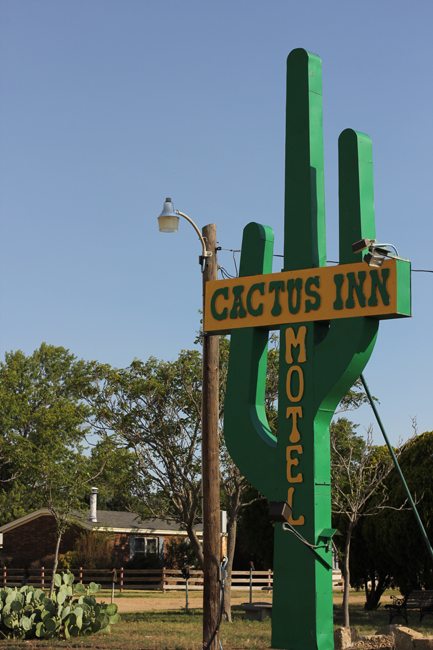 We saddled up to get our steak on next door. I think we’ve both eaten more beef on this trip than we have in the past year!! Again, when in Rome, I say. 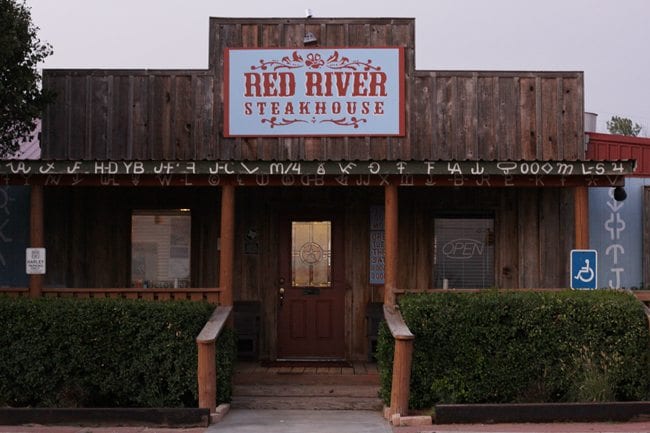 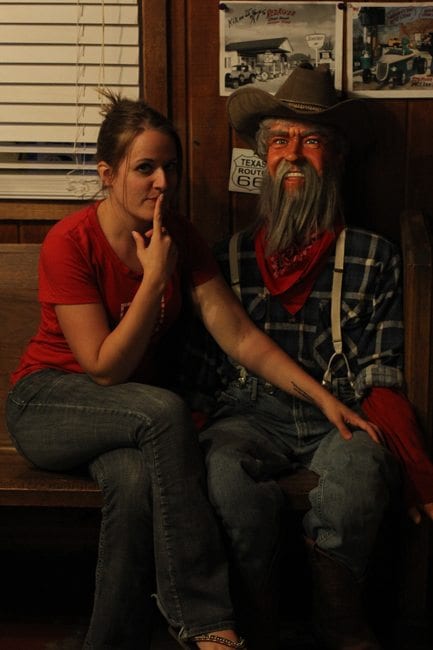 After dinner, we took a drive around McLean. We saw this little market called Wildflower, which looked like it would’ve been the perfect place to get a quick breakfast the following morning, but it would be Sunday unfortunately. We also stumbled upon a tail-less gray cat who reminded us of our big gray cat Smokey.

When we got back, Chris turned on the Stanley Cup Finals and we settled nicely into our room for the night.