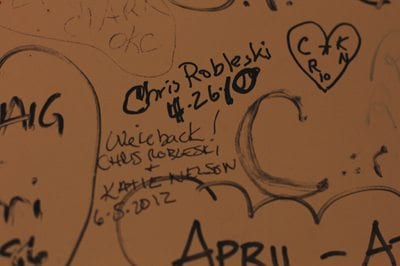 As we were packing up the car, we noticed the owner of the Skyliner was already hard at work on his surrounding garden at 9am. As Chris took photos of the iconic sign, the owner walked over to me to show me the huge batch of cilantro he had harvested. He hand-picked some of the coriander seeds, held them to my nose and urged me to take a whiff! Sure enough, smelled like heaven to me (huge cilantro fan here). He explained that he loved to grind up the seeds and lump a tablespoon of the stuff onto his meal. Sounds fantastic to me! When we were ready to take off, he wished us safe travels. Anyone who has complained of the Skyliner and its owner surely didn’t have the same experience as we did, which is too bad. We’d stay there again in a heartbeat!

We drove just a short jaunt down to the legendary Rock Cafe for breakfast…and an amazing breakfast it was. The applewood smoked bacon was perfection and the biscuits and gravy was some of the best I’ve had (huge b&g fan here too). Clearly it was all because Dawn Welch the owner was slaving away in the kitchen.

Thank the Powers the Be she was able to bring the cafe back from the dead after a terrible fire a few years back. Little did we know Dawn and her bestie Bev would be hitting the road themselves in a week for a special VIP Grand Opening of California’s Cars-Land. Talk about an experience of a lifetime!! And we can’t think of someone more deserving than Dawn!

I popped in the bathroom to check out all the 66ers’ wall scrawings and found Chris’s from 2010…aw. After another couple cups of coffee we were on our way once again…drove the same windy stretch we had driven the previous night which was far less treacherous in the light of day. 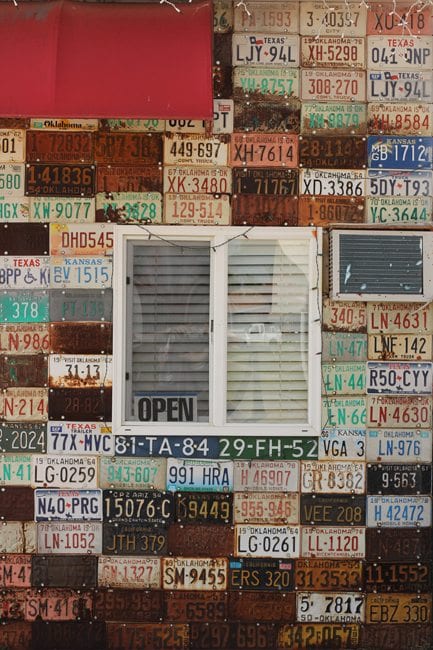 Just as some major rainstorm clouds rolled in from the southwest, we arrived at the Clinton Route 66 Museum for a tour and a sales pitch. 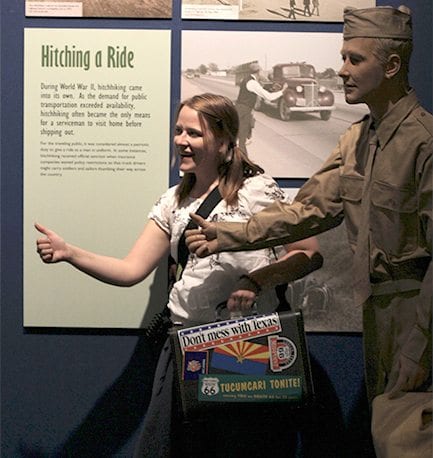 While purchasing our tickets and signing the guest book, Chris commented that a couple from Manitowac, WI, had literally just signed. Suddenly a woman in the gift shop asked, “Did someone just say they’re from Wisconsin?” Sure enough! The couple was right next to us! We chatted for awhile about our respective 66 journeys and plans (this was their first AND they were biking it!). We wished them well and headed into the exhibit. Just as we had heard, the updates and additions to the museum were absolutely top-notch. I loved flipping through the scrapbook of the Flapper Sisters (with one brother!). Just after the [kinda heart-aching] short film at the end of the tour, there’s a “Past and Futures” exhibit room, currently showcasing some classic, cool gas pumps and even cooler “Friends of 66” wall featuring photos of all the Route 66 Characters we know and love. In the gift shop we were actually able to speak to Pat Smith about our book and she became yet another brave soul who decided to take a chance on our book!! And once again we were super humbled and grateful. We wished her luck with upcoming additional updates to the museum and headed into the downpour making its way across the Oklahoma plains.

Being unable to stop due to the weather, we traveled quickly through the rest of Oklahoma and luckily caught a break in Texola, which rivals Glenrio as one of our favorite ghost towns along the Route. Despite our growling stomachs and press for time, we took advantage of the photogenic stormy skies and took a bunch of shots. 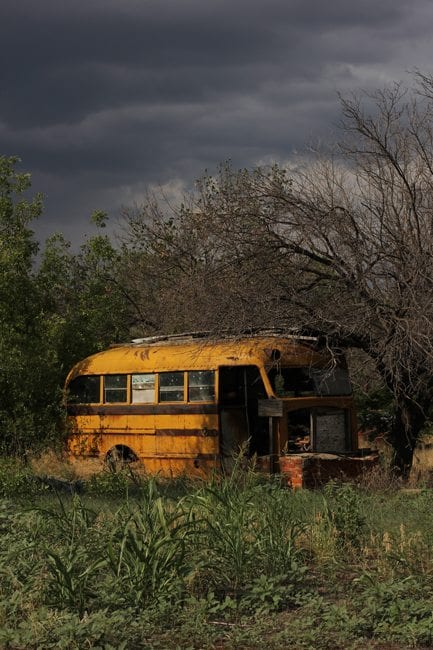 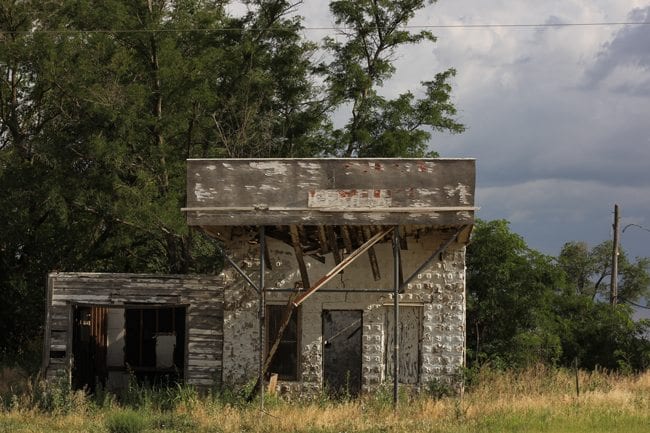 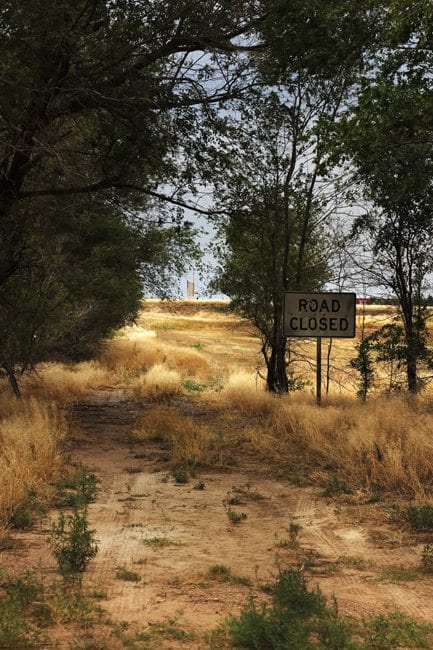 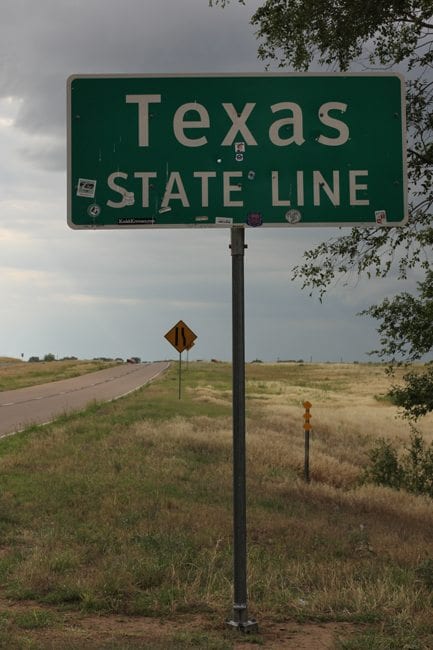 We checked on the time and knew we had to get moving to make it to Amarillo at a decent hour (i.e. before 10pm?!) Driving across one of the more remote and—in our opinion—beautiful stretchs of 66 as the sunset was trying desperately to poke through the storm clouds, we raced through eastern Texas…… 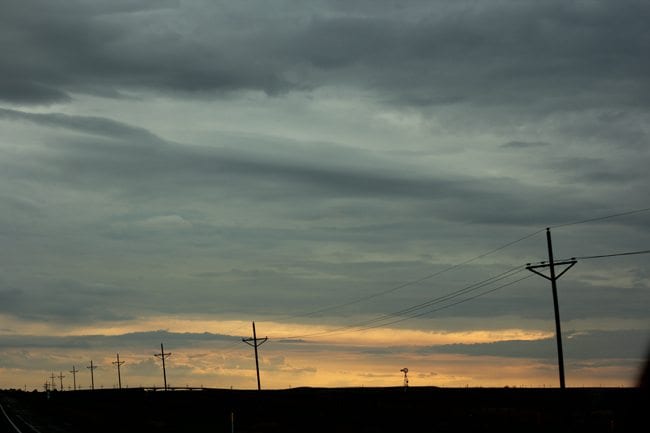 ….Still stopping to take a pic or two of our favorite spots along the way. Can’t get enough of Groom’s two leaning water towers and Conway’s Bug Ranch. 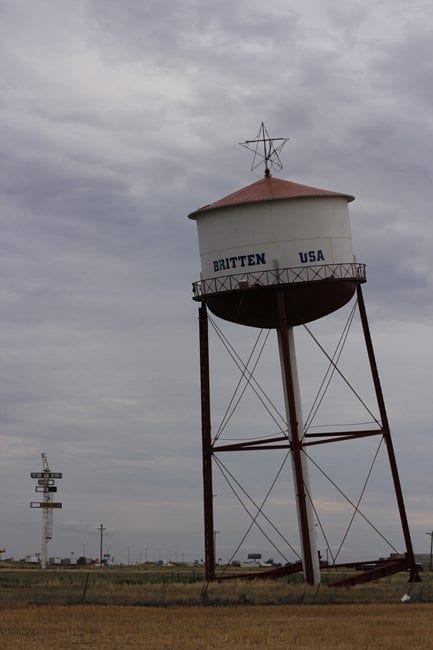 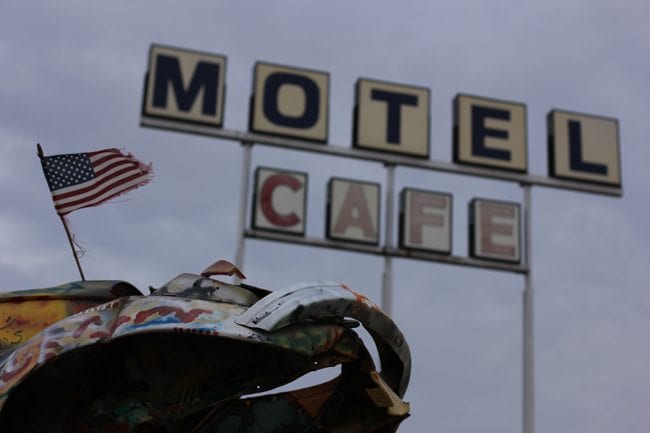 We FINALLY made it to Amarillo, and after a bit of a traffic-direction snafu, pulled into the Big Texan: Home of the FREE 72 Oz. Steak parking lot, grabbed ourselves a room, walked directly over to the restaurant, did not pass go. Steak. I’m not sure if I was a former Lady of the Saloon in my past life, but for whatever reason, I feel right at home in Texas and all of its gaudy western décor. Add in the giant 60:00:00 countdown clocks to get your FREE 72 oz. steak dinner and I’m set! Go big or go home I always say. We scarfed down our dinner, took a spin around the gift shop and were more or less escorted out as they were indeed trying to close up! 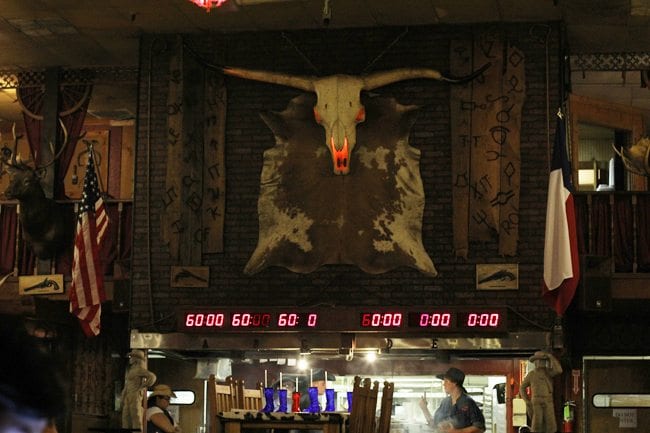 Big Texan Countdown…waiting for a customer

I was planning on a relaxing evening with some cable and blogging, but Chris had other ideas. Next thing I knew we were back in the car, heading to the Caddy Ranch in all its splendor, only this time it was pitch black with only our flashlights to lead the way. Despite the haunting screach of some unidentifiable wildlife and the disappointment of the full moon trapped behind a thick cloud cover, we were able to get some decent night shots using the distant glow of Amarillo as our make-shift moon. At nearly 1am, we wrapped it up and headed back to our gaudy, but cozy western-style room for another short night’s sleep with an epic drive to Holbrook, Arizona on the docket for the following day. 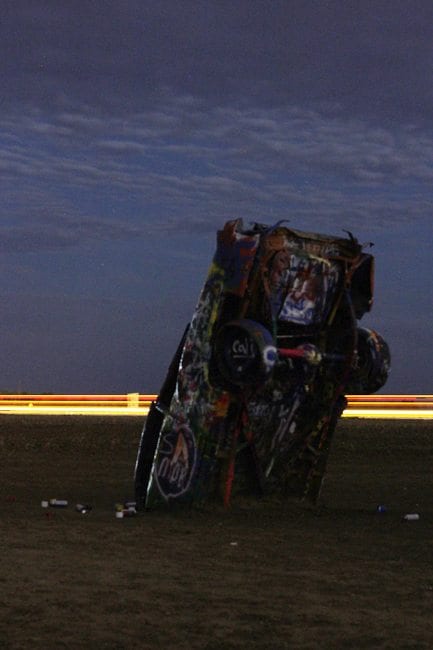