This weekend we’re hittin’ the road for the first leg of our “self-guided” book tour: Route 66 Illinois!! We hope to make it all the way to Cuba, Missouri, to stay at Connie Echols’ newly restored Wagon Wheel Motel. Chris featured a Polaroid of the Wagon Wheel sign in the book, accompanied by his own personal account:

Fortunately Connie has helped bring these cabins back to life, and we can’t wait to see them for ourselves! Now, obviously there’s a LOT of ground to cover during our extended three-day weekend. 443 miles of Route 66 to be exact, not counting the introductory leg from Milwaukee to Chicago. Two 66 trips ago we woke up in Lebanon, MO–100 miles further south–and we made it home before midnight with plenty of memorable stops, including the Pink Elephant Antique Mall, a failed search for Lincoln, a famous Concrete at Ted Drewes and a delicious Cozy Dog! Where there’s a will, there’s a way!

Highlights we hope to hit this weekend include a revisit to the [in]famous Cermak Plaza in Berwin, the Joliet Jackhammer and Joliet Historical Museum, the Burma Shave signs in Godley, Atlanta’s Palms Grill Cafe, Litchfield’s Sky View Drive-In, an abandoned Snake Bridge (?!!), the World’s Largest Catsup Bottle (!!!) and the crazy huge Amoco sign outside of St. Louis! 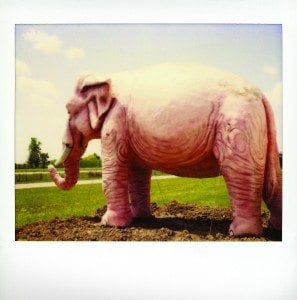 Through the magic of social media, we even set up a super informal meet-&-greet with the kind people of the Route 66 Association of Illinois Museum. While it’s hard to say when we’ll arrive where, we hope to stop at the museum around 2:30 on Saturday.

Now what’s really involved in a self-guided book tour? Who knows?! That’s what makes it awesome. Our only real focus is to meet Route 66 fans, museum caretakers and small business owners! We want to introduce them to our book and the Fading Nostalgia mission. One of the book’s main themes is how some of the Route has disappeared and been forgotten. The other outstanding theme, however, is that there are people–people like Connie, for example–who won’t let that happen anymore. We are definitely a couple of those people too! So far Polaroid Photos from Route 66 has been really popular with Polaroid fans, mostly young people who love the old school charm and the aesthetic beauty of the film. We’ve found this to be a really cool way to introduce the real Route 66 to those who are unfamiliar. Many still think the Route is just a dusty dead road, so far from the truth of course! Ironically enough, some Route 66ers still think Polaroid is dusty and dead too! Also far from the truth! In the short month that this book has existed, we’ve found that the combination of both Route 66 and Polaroid–to us a match made in heaven–has actually introduced a lot of people to the existence of the other! Definitely a pleasant surprise for us, and hopefully to those who are fans of 66 and/or Polaroid!

With that said, we would love to send a super huge thank you shout out to those out there who have not only taken the time to take a look at Polaroid Photos from Route 66, but actually go out of their way to review it or mention it in some way on their own blogs! We’ve set up some links and pulled quotes on the book’s page. Big thanks to Polaroid fanatics Graham Johnstone of [Love] Instant and Christopher Bonanos of PolaroidLand. And finally, extra special thanks to Ron Warnick for continuing to spread the Fading Nostalgia word!