I was 6 or 7 years old when I watched “Pee Wee’s Big Adventure” on HBO at my mom’s friend’s house late one night. I was so obsessed, that he taped it onto a VHS for my sister and I to watch to our hearts’ content…and that we did. My favorite scene was right after the nightmare-inducing Large Marge scene, when Pee Wee meets Simone at the Wheel Inn Restaurant right next to these huge dinosaur sculptures. Oh how I wished I could spend a morning taking in the sunrise, sitting on a big pink tongue inside the mouth of that T’Rex just like Pee Wee and Simone! There’s a scene right after the sunrise where Simone’s boyfriend Andy discovers the two of them stepping outside of the T’Rex.

[Of the 4,359 clips online, below is literally the ONLY one I found featuring the dinos.] 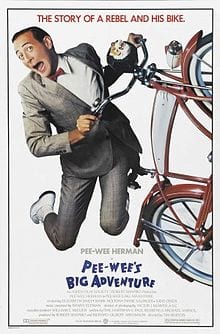 I must’ve watched that movie half a billion times, but always assumed those dinosaurs were just huge Hollywood stage props. No way did they actually sit there in the desert, open to the public like they did in the movie. This was of course pre-Internet, so even if I was old enough to know I could Google these creatures, what else would I have done in that day and age? Ready Reference??

Many years later I stumbled upon “Pee Wee’s Big Adventure” on some cable channel and my dino obsession came flooding back. Being a Google nut at this point, I clamored over to my computer to find out more. Not only were they NOT Hollywood stage props, but they STILL existed!! 2000 miles away, near Palm Springs, California, they stood there in a little town called Cabazon. 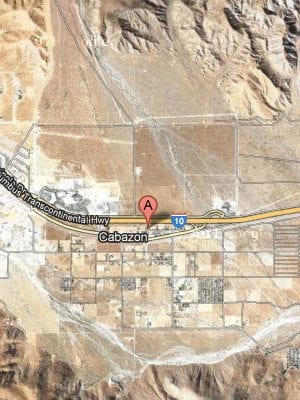 Claude Bell built the mammoth structures over several decades. I can’t tell you the mixed emotion of knowing something so cool truly existed, and yet it might as well have been on Mars. I’ve done some heavy cross-country traveling in the past three years, but back then road trips were few and far between. So every once in awhile I’d Google the dinos again just to daydream about visiting them. I would map them and look at the satellite bird’s-eye view–the closest I could get. Back then they literally sat in the middle of the arid desert valley, surrounded by nothing but the interstate, the Wheel Inn restaurant, a Burger King and miles of sand and brush.

In 2006, my shot to visit the dinos came by way of my boyfriend at the time. His sister and brother-in-law owned a house outside of Phoenix and he invited me to accompany him out there to visit. I didn’t want to impose a nine-hour round trip on my new friends, but I was so close!!! We ended up going up to Sonoma instead. Gorgeous, but there are no dinos in Sonoma. Fast forward two years later, same boyfriend, another Arizona trip!

…….But alas, this time we went to the Grand Canyon. Yes, super cool, but the dinos!! Sigh.

When this former boyfriend and I broke up, a teeny tiny piece of me couldn’t help but wonder if I’d ever see those dinosaurs. At this point it had become a life mission, as total nerd-alert as that sounds. Well a year and a half later, I met Chris–cross-country traveler extraordinaire! In 2010, we planned a trip along Route 66–Milwaukee to California and back–and I told him that including a loop south of Route 66 on I-10 to the Cabazon Dinosaurs was seriously tops on my list.

How far did we get on that trip before we had to turn back? Ludlow, California. Less than three hours away.

A crucial job interview back home and the fact that we had already maxed out our time had tortured us the entire day…but we knew we had to turn around there in that dusty forgotten town. And as we headed back eastward, I made a promise to myself that if we did another Route 66 trip, there was absolutely no way I would miss Cabazon again.

And that I did not! On our 66 trip last fall, after our night in Santa Monica, we picked up the I-10 late in the afternoon on our way back toward Phoenix. It was really happening. The sun dipped underneath the horizon behind us as we drove through San Bernardino. My first glimpse of the dinosaurs would have to be at night, there was no way around it.

And I wouldn’t have it any other way. 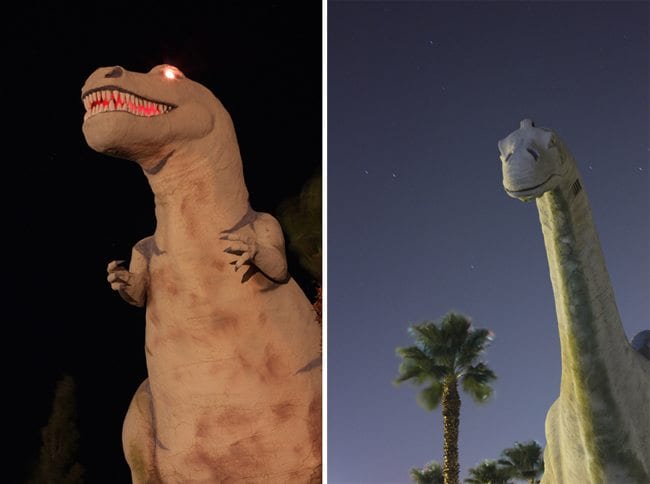 After a missed exit and some circling, there they were…looming in the dead of night. Just as huge as I imagined they’d be, especially the Brontosaurus (aka Apatosaurus). The eyes and mouth of the T’Rex glowed a soft red and a powerful desert wind rustled the surrounding palm trees. A handful of visitors hung around the little park as Chris and I set up our tripods and cameras. The night wasn’t going to stop me from remembering this moment!! With shutters open wide, I grabbed a few good shots–my 50mm lens barely wide enough to capture half of each dinosaur.

We visited for about an hour before packing up our gear. I noticed a sign that said you could go inside both dinos when the museum was open. I checked the hours and it was early enough that we could drive back the following morning without losing too much travel time. At this point I just had to return and see them the light of day. The museum seemed worth the trip. I didn’t have to do too much convincing before Chris agreed. 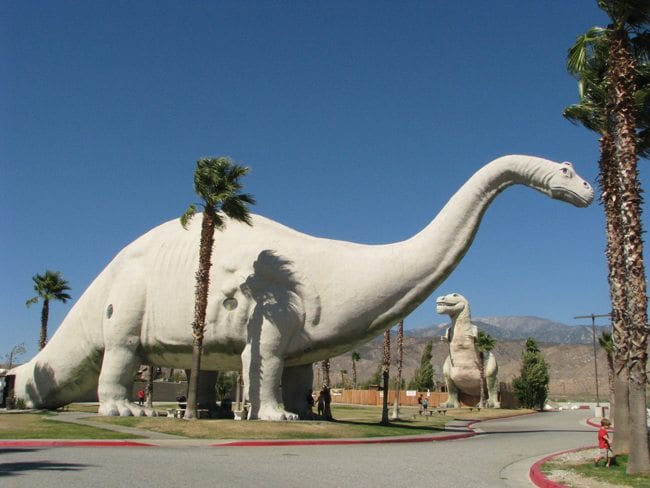 Sure enough the museum was definitely worth the half-hour back-track from our motel in Indio, at least for this dino-crazy girl. Right away I noticed that the park looked so different from the satellite image I first saw years ago. Now, it is covered in grass and palm trees, groomed quite beautifully! 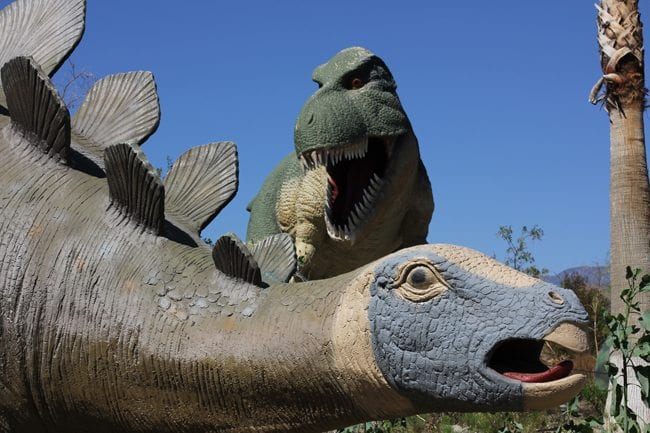 The dinosaur zoo, hidden behind a fence off to the side of the park was filled to the brim with fiberglass and robotic creatures from Velociraptor and Stegosaurus to Triceratops and a even giant turtle. 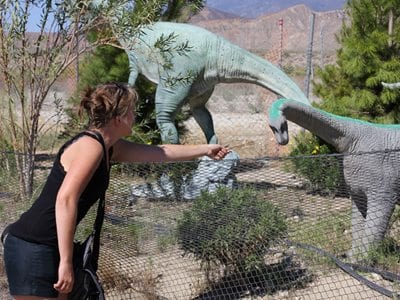 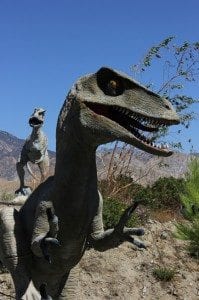 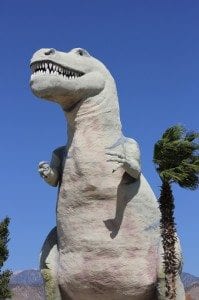 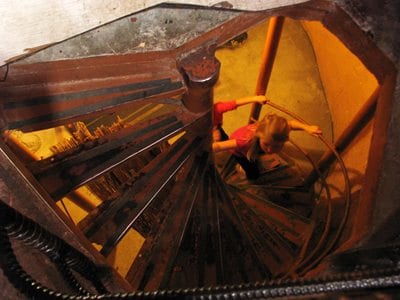 I’m not going to lie, I probably took 200 photos. The oddest thing about a park that is quite odd in the first place? It’s a Creationalist Museum of all things! The park boasted signs and placards everywhere touting that dinosaurs were created by design, not by chance, some 6000 years or so ago. (You can read more about Creation Scientist Theories here.) You really do have to see it to believe it!

We wandered through the entire park and saved the best for last. We finally made our way over to the stairs leading into tail of the T’Rex. We climbed inside, up a precarious spiral staircase, to the mouth of the beast. I still laugh to myself when I still thought…after all these years…it would actually look like this: 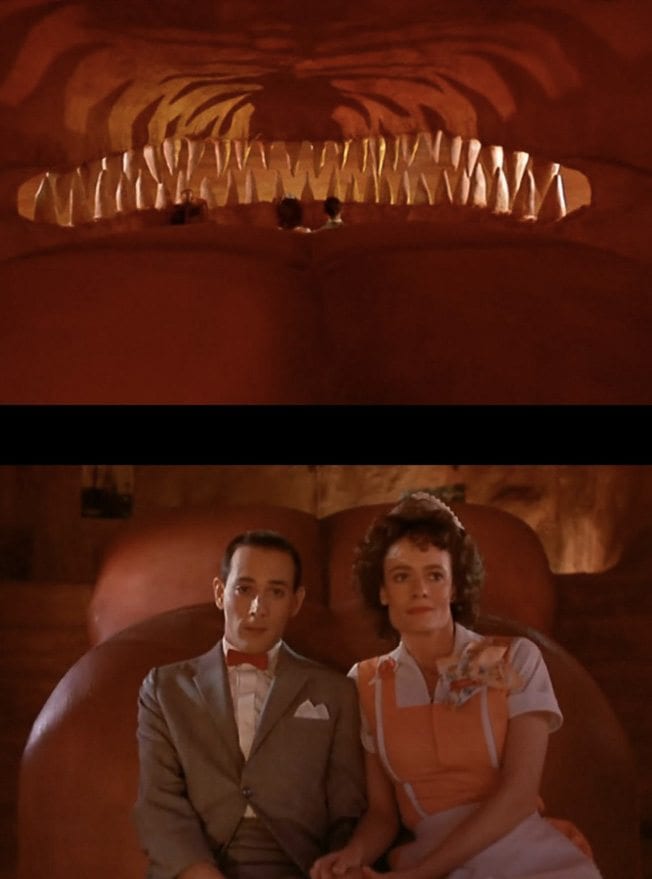 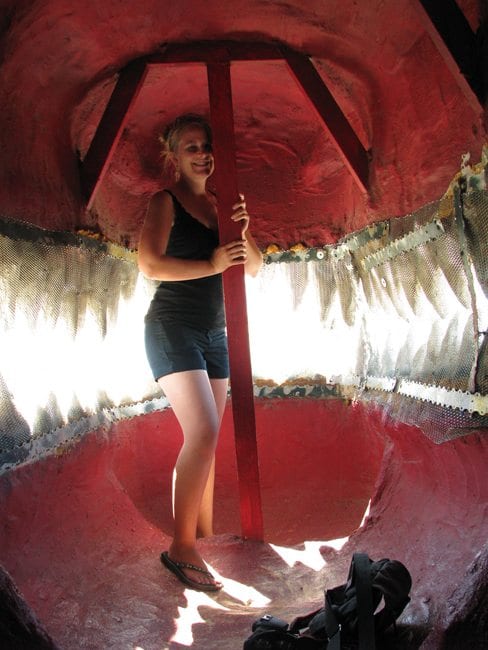 The awe and wonderment of my childhood was not dashed, however. I couldn’t be more ecstatic to have finally made it to Cabazon to see my beloved dinosaurs! Probably one of the more ridiculous items on one’s bucket list, but those of you who love road trips as much as we do probably understand! There’s nothing like the roadside oddities that dot the highway landscape. The added whimsy is what keeps visitors traveling America’s side roads.

Chris and I are planning a trip along Route 66 in June for the Wheels on 66 festival in Tucumcari, NM…ohh, just a 14-hour one-way trip to Cabazon, CA. Honestly, I have no idea if I’ll ever see them again, but hopefully there are nuts just like me out there who are just as obsessed and are planning their own visits to say hello to these awesome giant creatures and all of their surrounding prehistoric friends!

So on that note, head on over to the Cabazon Dino website to find out more about the history behind Dinny and Mr. Rex and the Creationalist Museum owners who take care of them now! 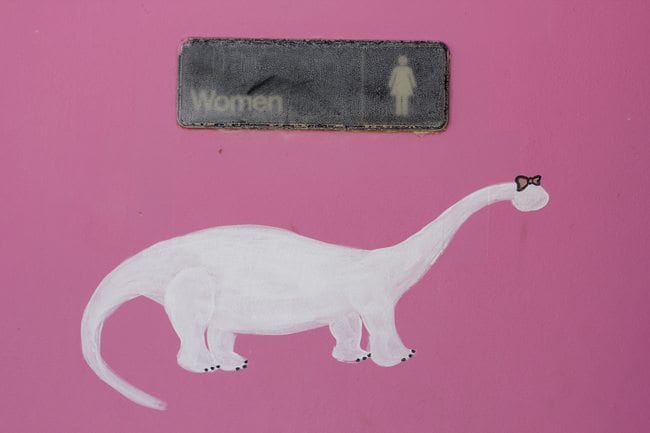