When planning out our schedule for the big “US Tour,” we’ve got our favorites. And hands down, Art on the Square in Belleville, Illinois (a town just east of St. Louis) is, and probably always will be, one of our bookmarked shows. The art festival is consistently ranked at the top in the country for one very good reason and the best reason of all: the community. The Belleville-area townspeople not only look forward, but jump at the chance to volunteer for this three-day event…and it definitely shows. Throughout the weekend, everyone is so helpful, kind, and genuinely excited to do their part to contribute to this well-oiled machine (a term we use respectfully, because—even after ‘only’ five years showing in these art fairs—we know how crucial it is to run these events like a machine). Secondly, the patrons who walk the festival don’t just Zombie their way through the white tents that dot their beloved town square – the crowd is honestly captivated by us crazy craftsmen and women who caravan into the neighborhood for the weekend. So for all these reasons and more, we thought we’d give you a glimpse into our incredible experience back in May. If anything but to show you that art and creativity really are alive and well in America! 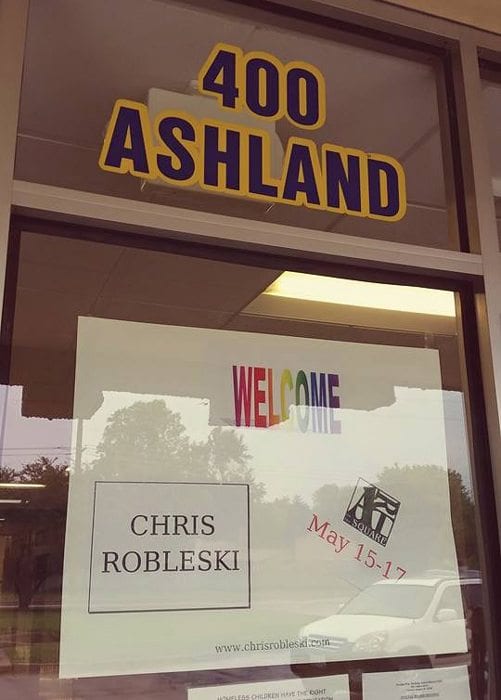 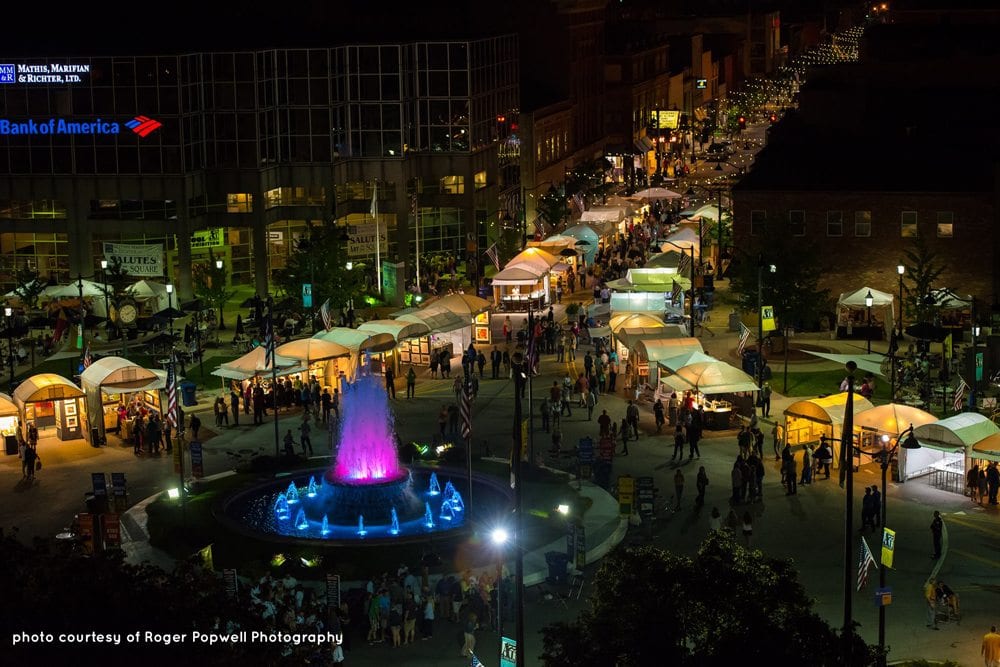 Night time is always beautiful on the Square!

Quick rewind to last year, when we had the honor of taking part in Art on the Square for the first time. A few months prior the show weekend, we received an email asking artists if they’d like to take part in the Artists in Residence program: the Thursday before the show opens, various local elementary, middle, and high schools in communities surrounding the Belleville area invite artists to come “Teach For A Day.” To be perfectly honest, upon receipt of the email, we were like, no way can we do this. I mean we’ve got Teacher friends. Even for a day, this is a tall order. The difficult task of capturing and keeping kids’ attention in class is one thing, but how are we going to teach these kids night photography and light painting? Well, as it turned out—after hours of organizing the lesson plan, which we dutifully practiced over and over as we drove down I-39 the night before—we think we got it down because our 2015 6th graders at Pontiac Junior High School had a blast and so did we!

So of course, when we were invited back to Art on the Square this year, we leaped at the chance to teach again! Of course, the weeks leading up weren’t without their stomach full of nervous butterflies. Last year, we only taught a couple classes of 6th graders. This year we were promoted to the full day: six classes of 6th, 7th, AND 8th graders, from 8am to 3pm. What if we just lucked out in 2015? And what about these 8th graders?! I remember 8th grade well. Yikes. We definitely had to kick this up a notch, but how?

Back in Chris’s old Flickr days, when light-painting was more of a fringe art style, he and an extreme talent Darren Pearson, otherwise known as Darius Twin, followed one another’s photography. You’ve probably seen Darren’s stuff without even realizing that the innovative work was all thanks to one truly talented guy. 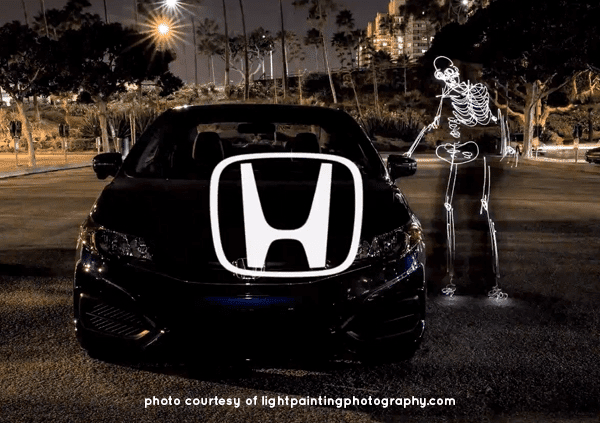 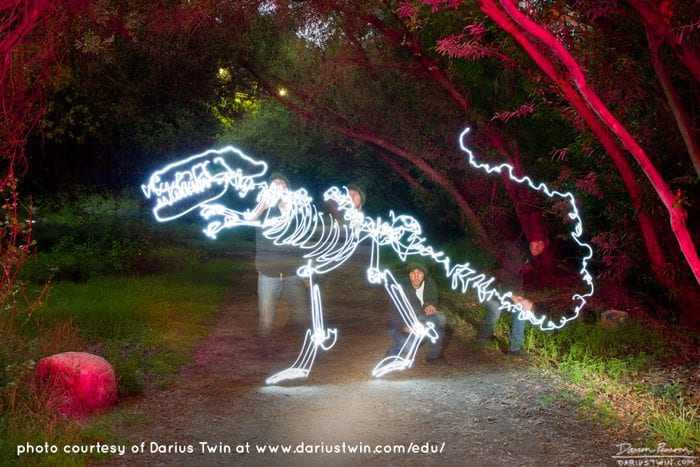 Obviously, Darren is a night photographer with some ridiculously cool light illustration skills, using a tool that he actually created himself called the “Night Writer”. So clearly we had to purchase one to use in class: such a perfect way to get these kids up and out of their seats! 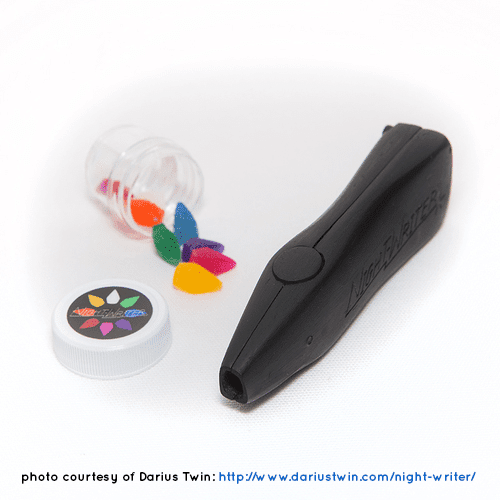 Ok, so here we’ve got middle schoolers, plus the semi-complex explanation of night photography, plus the fact that we’re not teachers…the final card stacked against us: Demonstrating our night photography in the daytime. After specific instructions, all we could do was cross our fingers they understood how pivotal it was to have a near-black classroom.

Before the weekend, we received our school assignment: Mascoutah Middle School, just 20 minutes east of Belleville. And despite an intense, late-night drive through T-storms till 1am, we were ready to rock at 8am sharp! When our teachers, Mrs. O’Bryan and Mrs. Laidley for the Art and Technology classes respectively, showed us to our classroom for the day, complete with windows completely darkened by black paper and giant kickass digital Smart Board to physically tap around on the Fading Nostalgia website, we immediately knew we were in the best of hands!

We started class and right away the kids were completely engaged! We broke the ice by asking them about their own adventures and what they like to take photos of. As we taught them about open camera shutters and long exposure, and asked them questions about how they thought we accomplished various pieces, so many of them began to figure it out. Plus, they asked all kinds of awesome questions like “Do you ever see ghosts?” and “Do you have to ask permission to get into these places?” That one’s always fun to deflect! “Take only photos, leave only footprints…”

Now the fun part, light painting time! We showed the kids the Night-Writer and did a quick demo – we even explained that if they wanted to write out their name, they’d have to remember to draw the entire thing backward. The kids lined up and we shut off the lights. Considering the fact that this was their first light painting experience, these guys created some pretty cool illustrative experiments! But the best part was after the demo, when we’d show each student his or her attempt, and we asked: “So how did you feel about your drawing when you saw it?” Nearly every student answered that he or she was a little disappointed and that it was way harder than it looked. We explained that, yes, it definitely takes a lot of practice…a lot of trial and error…but eventually you do get better. Like the old Chinese proverb says: show people a piece of artwork, and they’ll think it’s cool for a second. TEACH people the art, and they could create for a lifetime! 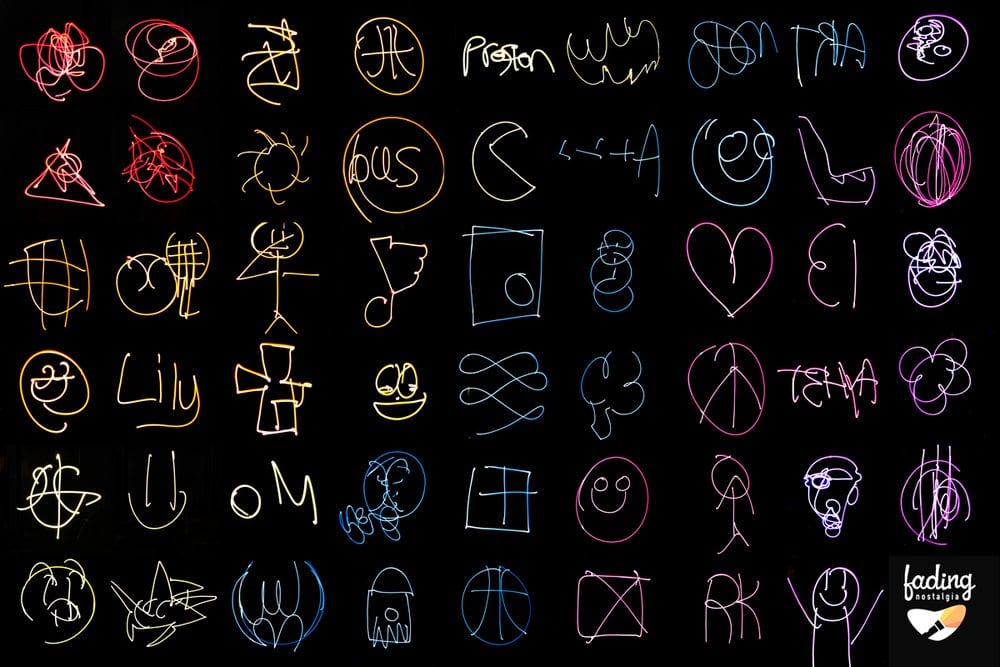 And that couldn’t be further from the truth. After the class wrapped up, and we parted ways with our awesome teachers Mrs. O’Bryan and Mrs. Laidley, we proceeded to receive emails from several of the students! One student even told us all about how she got home from school, set up her camera, grabbed a flashlight, and started experimenting all on her own! And once the show started up, students brought their families to our tent and proceeded to explain to them, word-for-word, how we create our work. It’s extremely tough to put into words how awe-inspiring this was for us to experience. Interacting with intrigued art fest patrons has always the best part of doing these shows, but seeing these students interact and then teach their families…again, words can’t describe the feeling. 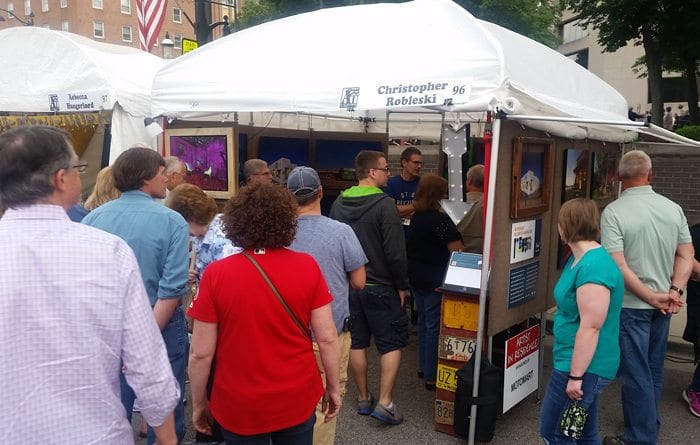 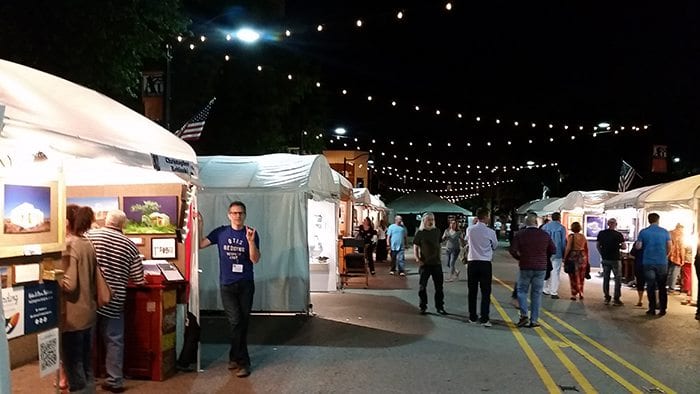 Which leads me to yet another reason we, admittedly, have a slight infatuation with Art on the Square. At last year’s show, we had the distinct pleasure of chatting with two very cool cats: David and Joy. After only a few minutes of conversation, they told us they would love to figure out a way to help us photograph the iconic Majestic Theatre in downtown East St. Louis. And unless you’re just joining us, you know how incredible that experience turned out! 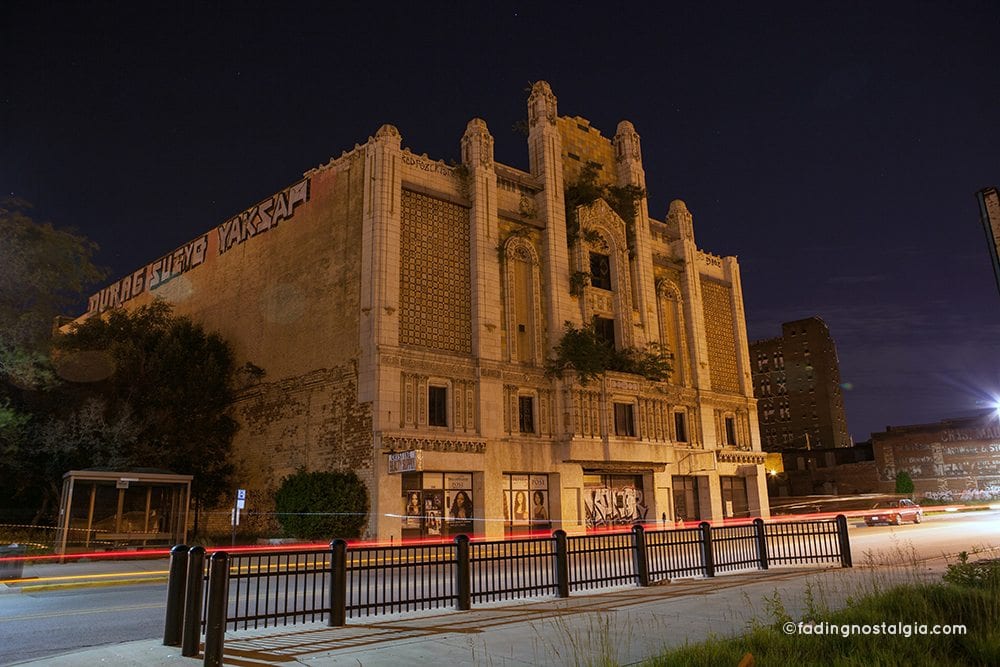 Well, for the 2016 show, David and Joy generously opened up their home to us for the weekend. To return the favor for their ultimate generosity, we had yet another East St. Louis adventure in mind. Saturday night—after the show ended around 8pm—the four of us gathered up our gear, Joy’s gigantic flashlight included, jumped into the car, and headed straight for East St. Louis once again. This time, we wanted to capture a lonely ballroom: an unassuming broken little space that will most assuredly join its fallen architectural brothers and sisters one day as EStL is making strides to demolish the ruins that sit there vacant, and are apparently in no way repairable.

Like our last visit to the Majestic, this building has a bit of an ambiguous entry, but we jumped in (no escorts this time!), did some exploration, smelled the fine smells only squatters can leave behind, plopped down the tripod, and got to work! Having never been inside this particular location, we still found a dynamic tableau relatively quickly, and within 15-20 minutes and dodging more bats, we created the image below: 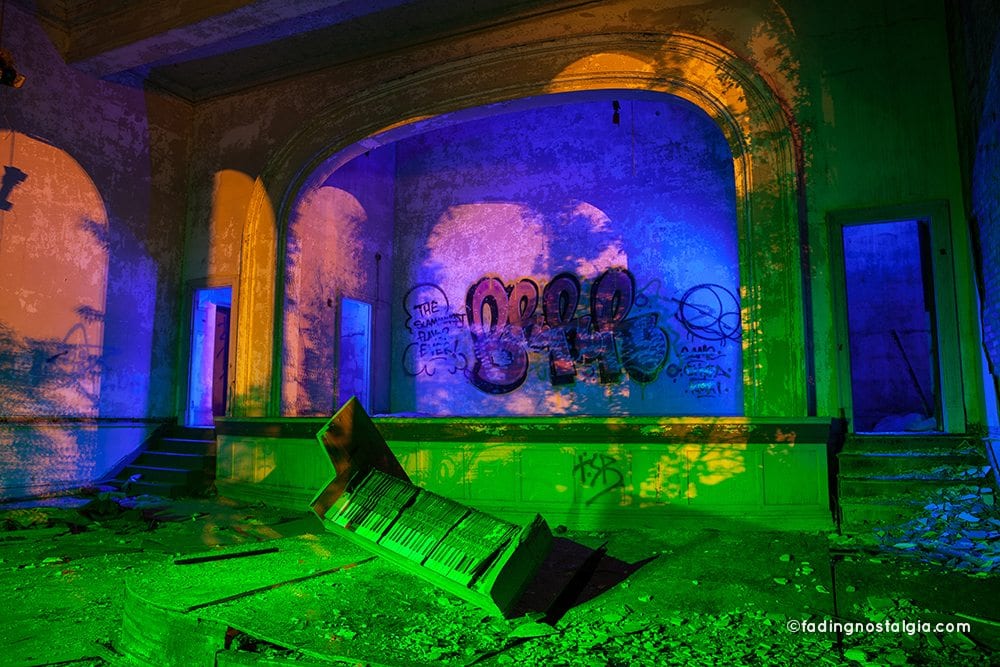 We explored a little more, hunting for an elusive staircase, and found a lost Polaroid from what may be someone’s last and only memory of home? We typically live by the creed “Take only photos…” but admittedly, we don’t always die by it. And, in this case, the Polaroid was so buried and forgotten, we decided to rescue it from the confines of its surrounding rubble. 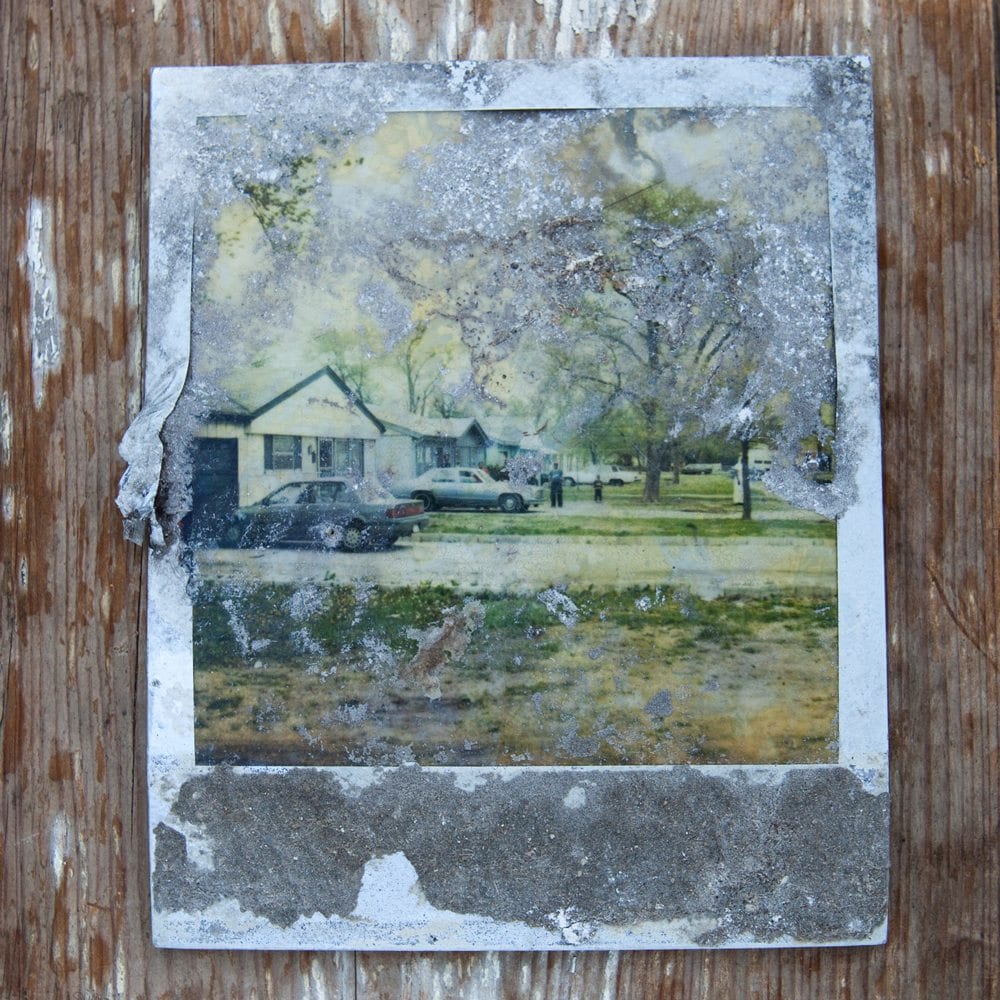 If you recognize this spot, we’d love to know the whereabouts.

Speaking of rubble, we did find the staircase. But all that was left was a shell of its former self: no steps only iron. The guys even contemplated climbing up the shell to the upper floors for more exploring, but stamina levels from the early AM start and the long art show hours had the final say. Plus, we needed to conserve any shred of energy for our night-cap ritual with our weekend hosts at Greystone Gardens. If Saturday were marrow, well we sucked it dry!

Of course, Sunday morning came faster than our aching human frames desired, and it was showtime again in beautiful downtown Belleville. But before we opened up the big white tents, the staff gave us one final thank you for setting up shop in their town for the weekend: the annual Artists Breakfast! Last year we took home one of the prizes, but win or lose, it’s always great to see everyone sit down to relax and break bread with one another, and for the artists to likewise recognize—even if by mere applause—the hard work of the 100% volunteer-operated show.

After one last day at the festival, and one last night of pizza, beers, and Sharks vs Blues playoff hockey with our generous hosts, we packed up and took the long way back to Milwaukee the next morning.

Another one for the books.

Thanks to Mrs. O’Bryan and Mrs. Laidley for everything you did to prepare for our arrival, for a delicious lunch, and for making us feel perfectly at home in Mascoutah. Thanks to Mary and Rhonda for all the work you’ve done for the Artists in Residence program. Thanks to all the Art Fair on the Square volunteers and to Patty for overseeing the well-oiled machine. And of course, millions of thanks to David and Joy for extending not just your home, but also your friendship to a couple of kindred spirits who like to play with lights in dark abandoned buildings. 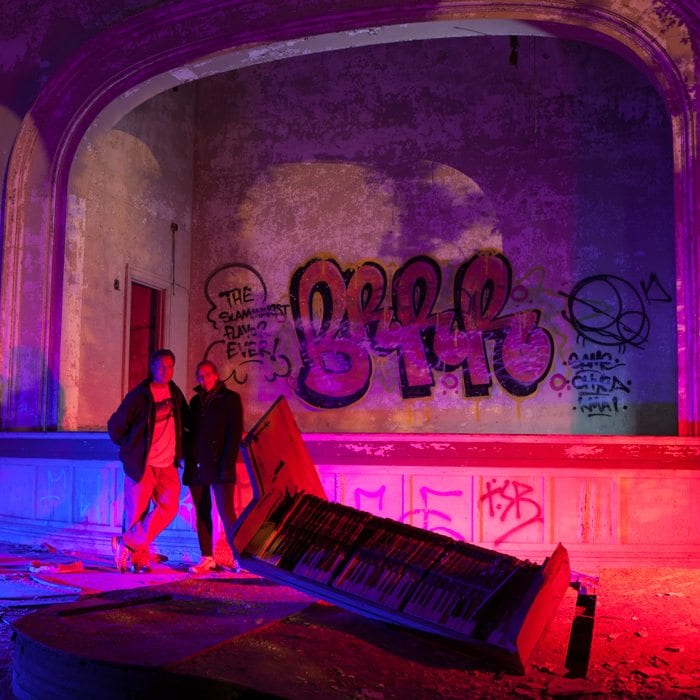 David & Joy: our adventurous hosts for the weekend – straight chillin.